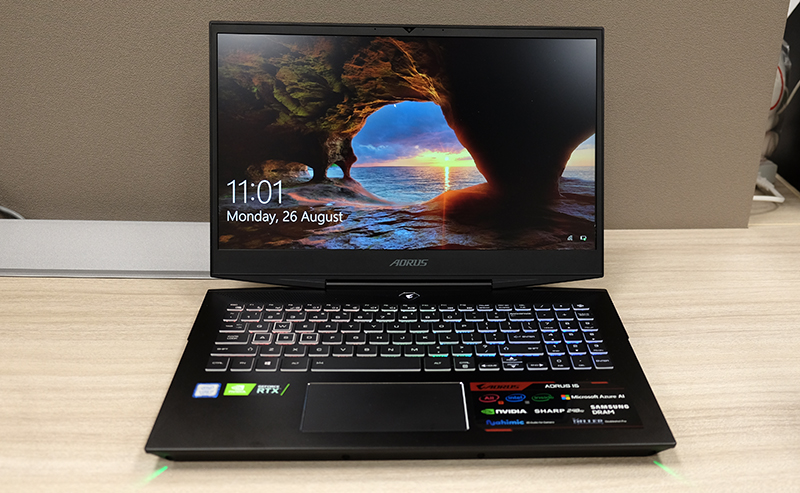 The Aorus 15 isn't the most sleek or elegant laptop around. While laptops like the Razer Blade and ASUS ROG Zephyrus S GX531 feel pretty refined, the Aorus 15 is almost clunky. It's fairly thick and heavy and features aggressive vents and a prominent angled gap between the screen and the base. The front corners of the notebook even project some light onto your table, a unique, but kind of gratuitous feature.

The black metal chassis doesn't exhibit excessive flex and is reasonably well put together. However, there's just something about it that feels a little rough around the edges, but that is probably to be expected given its relatively affordable S$2,999 price tag and positioning as a mid-range gaming laptop.

At 24.4mm thick and a hefty 2.4kg, the Aorus 15 feels like a literal brick, especially after I've gotten used to the slim and light Max-Q laptops being pumped out by just about everyone today. The Aorus' dimensions and weight aren't particularly egregious, but it's just that portable gaming laptops today have become so commonplace that it doesn't take much anymore for a laptop to be considered, well, chunky. 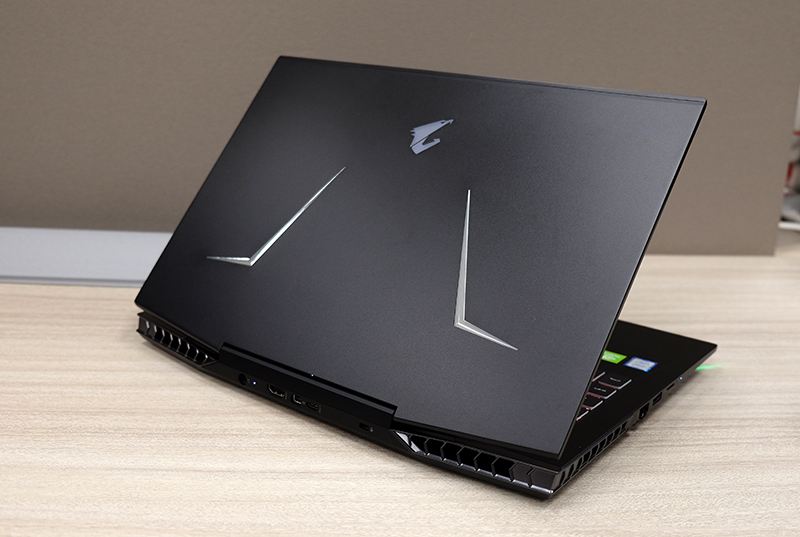 Fortunately, the bezels on the display are pretty slim on three sides, which helps the Aorus 15 feel slightly less unwieldy.

However, given the girth of the notebook, Gigabyte is also talking up the laptop's cooling system. The Aorus 15 comes with a GeForce RTX 2070 Max-P, so it has a higher 115W TDP, compared to the 80W or 90W on the GeForce RTX 2070 Max-Q. In addition, it is outfitted with higher clock speeds, featuring a 1,215MHz base clock and 1,440MHz boost clock. Although that isn't as highly clocked as the ASUS ROG Zephyrus S GX502, the Aorus 15 still needs a robust thermal solution to stay cool, and the good news is that gaming performance was excellent throughout, so thermal throttling doesn't seem to be an issue. 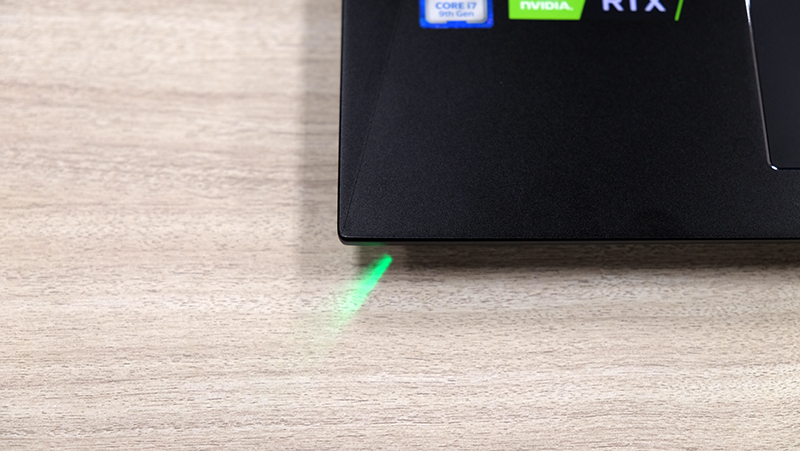 However, the fan only supports two different modes, Normal and Max speed, and there's no way to create a custom fan curve in the Control Center unlike on the Aero 15. The amount of noise that the fans put out at full speed is quite simply insane – the Aorus 15 actually sounds like it's getting ready to take off – so I'd really suggest just sticking to Normal mode. This might actually be the loudest gaming laptop I've encountered in a while, and it's so loud that you can hear it even if you're in the next room.

One issue I encountered at first was that the fans would inexplicably start running at full speed, even when I wasn't doing anything particularly taxing. Simply launching the 3DMark app or even just Microsoft Edge would kick the fans into high gear, and they stayed that way throughout my initial gaming benchmarks.

However, I soon discovered that updating the laptop's BIOS and Microsoft Azure AI version seemed to fix the issue, and the Aorus 15 no longer kept trying to ramp the fans up. It also became significantly quieter even when gaming, and the fans were reduced to an audible but perfectly bearable whir. BIOS version FB08/F005 and 19.08.20.01 for Azure AI appeared to be the solution, so make sure to check for updates when you get the laptop.

Nearly half of the laptop's bottom panel is given over to intake vents, and hot air is then expelled from the sides and back of the notebook. The two 12mm intake fans are paired with six heat pipes that channel heat away from the CPU and GPU. 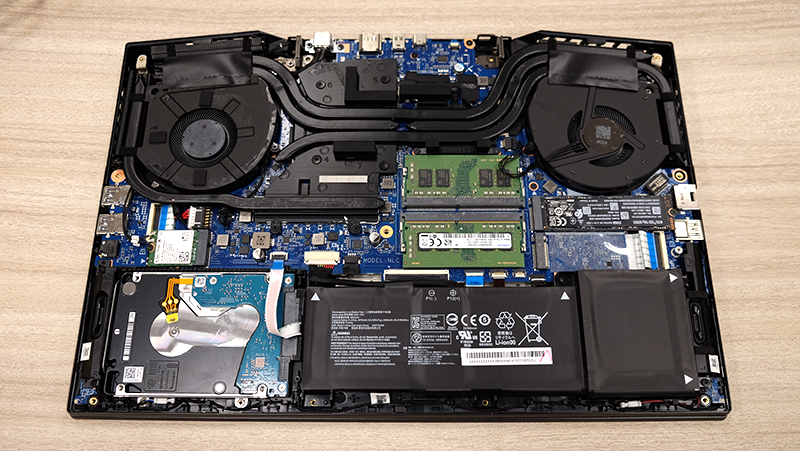 One good thing about the notebook is that the memory and storage slots are easily accessible once you crack open the bottom panel, so upgrades should be a breeze.

Does it have any unique features?

The Aorus 15 comes with the same Microsoft Azure AI feature that we've seen on recent Gigabyte notebooks like the Aero 15 OLED XA. In a nutshell, Azure AI is supposed to make it so you don't have to manually switch between different power modes for gaming or web browsing.

To hear Gigabyte tell it, Azure AI can learn and automatically implement the correct power settings for the CPU and GPU for different apps, in this way cutting down on heat and noise generated. However, I don't think that's borne out in our testing. For one, I've never noticed a significant performance improvement that can definitively be attributed to Azure AI, and while there have been a few frame rate increases in select games, they're generally still within the normal variances you'd observe between different benchmark runs and are hardly game-changing. It might perhaps require a longer run-in time to effect more insightful improvements, but don't hold your breath.

The AI widget sits in the top right corner of the screen, and you can pick between disabling it and three other modes. Edge Learning is the one you'll probably end up using the most. It runs offline and gives you limited access to Microsoft's database, but it'll keep memorizing your settings.

Furthermore, with the Aorus 15, I noticed that Azure AI was the one responsible for incessantly ramping up the fan speeds even when I wasn't running any game. Disabling Azure AI stopped the fans from creating a din every time you open an application, but as I mentioned earlier, updating the AI seems to solve the problem as well.

On top of that, unplugging the Aorus 15 from a power outlet will automatically put it in battery saving mode. The AI cannot function on battery power, so the widget will just let you choose between different power modes.

Given the Aorus 15's focus on pure performance, it's no surprise that it also comes equipped with a speedy 240Hz IGZO display. You probably won't be able to maximise the refresh rate on more demanding AAA games, but you might come close with less taxing esports titles like CS:GO and Overwatch. There's no support for G-Sync, but I don't think that's much of a loss with such a high refresh rate panel. 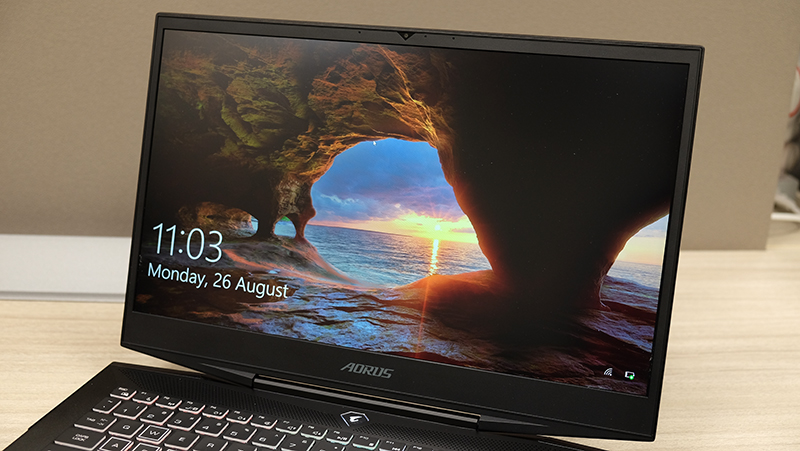 However, the display was a little on the dim side, and it could really use a brightness boost. That said, colours were pleasant and I couldn't observe any obvious bias toward either the warmer or cooler end of the spectrum. Overall, it's more than good enough for gaming.

The keyboard offers decent key travel distance and feedback, but the quality of the RGB backlighting leaves a lot to be desired. There are only two different brightness levels to choose from, and even the highest setting was too dim. I could barely see the RGB illumination under bright overhead lighting in an office environment, which was pretty disappointing. 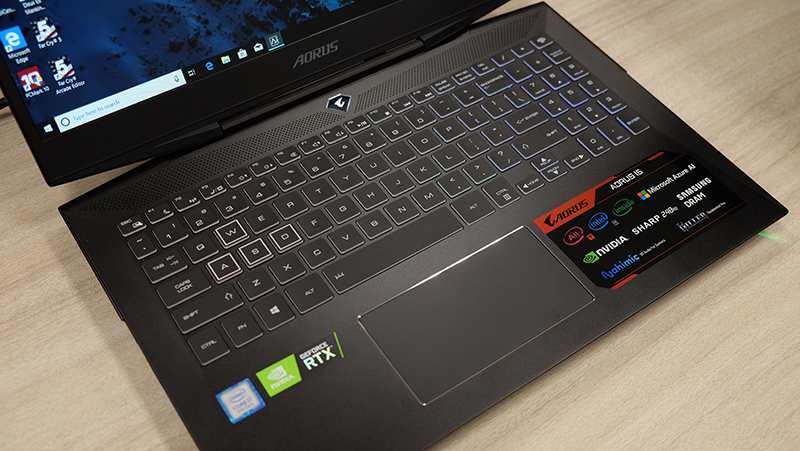 Furthermore, there is no support for per-key RGB customisations, and the keyboard is simply segmented into three configurable zones. And for some reason, the blue zone was a lot more visible than the red and green zones in the left and center. 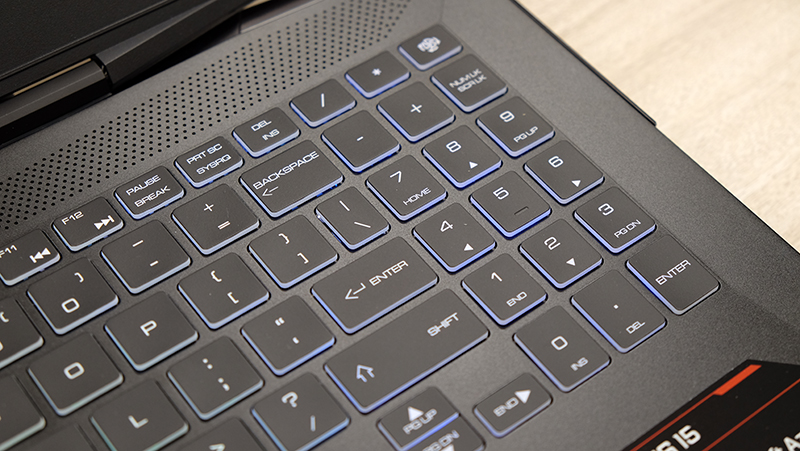 The Precision touchpad feels responsive and accurate, and features integrated left- and right-click buttons for a cleaner look. However, I'm not a fan of the silver rim around the touchpad, and there's some noticeable rattle when tapping on it lightly without clicking.

Finally, the dual 2W speakers are your average laptop speakers. They get loud enough, but clarity generally feels somewhat lacking and the low-end lacks weight.

When it comes to connectors, the Aorus 15 has one USB 3.1 (Gen 2) Type-C, three USB 3.1 (Gen 1) Type-A, one HDMI 2.0, one Mini DisplayPort 1.3 output, an audio and microphone combo jack, and a microSD card reader. There's also a dedicated Gigabit Ethernet port onboard as well. In addition, the USB-C connector supports output over DisplayPort 1.3, so you can link the Aorus 15 up to three external displays. 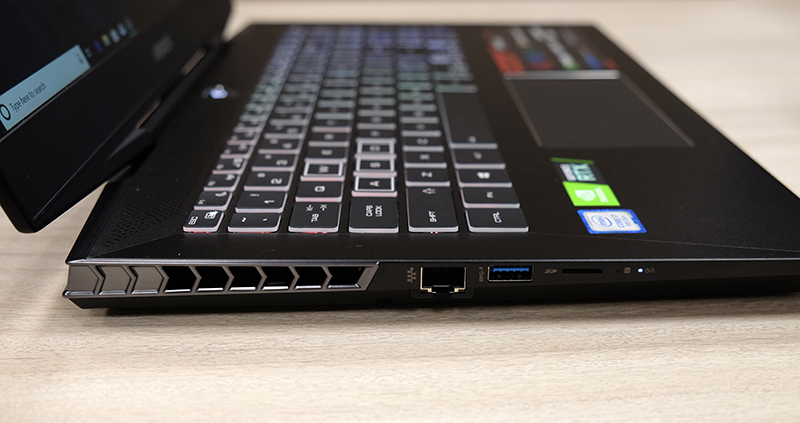 There's not a lot more you can ask for, except maybe support for Thunderbolt 3, but I think that isn't much of an issue considering that this is more of a mid-range laptop than a flagship model. Also, it's made for gamers than for content creators who would generally have more used for the Thunderbolt 3 port. 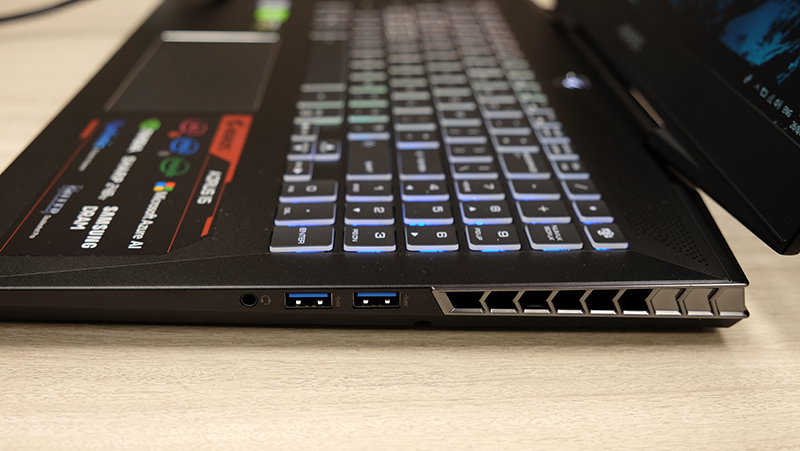 Wireless connectivity is handled by a Killer Wireless-AC 1550i module that supports a maximum throughput of up to 1.73Gbps and an E2500 Gigabit Ethernet controller. 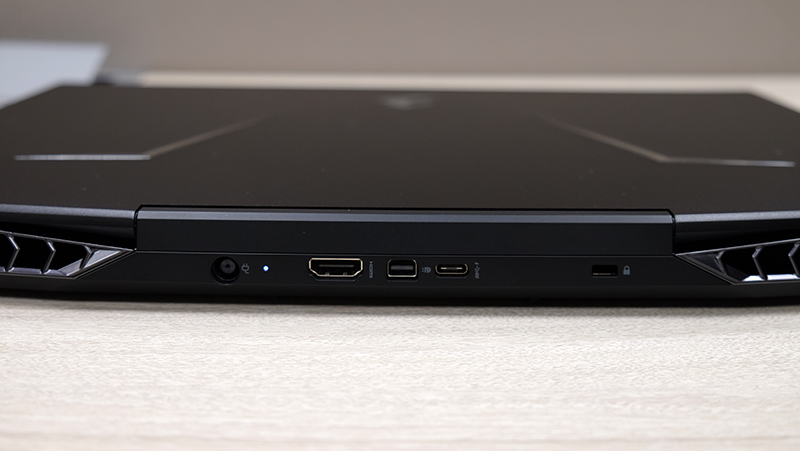