I've included two other laptops that are also equipped with an NVIDIA GeForce RTX 2070 Max-Q and the previous generation's Intel Core i7-8750H processor to provide a measure of how much additional performance the 9th-generation chip offers. In addition, the Razer Blade 15 was included to show how the Aero 15 Classic XA stacks up against a GeForce RTX 2080 Max-Q.

The Aero 15 Classic XA ships with the same AI features that were introduced on the Aero 15Y v9. It's supposed to intelligently distribute power between the CPU and GPU, depending on the task at hand. It does confer a small boost in synthetic benchmarks, and it's definitely unique, but it also feels slightly gimmicky and isn't really a stand-in for raw performance.

How does it do in daily computing tasks?

Overall, the Aero 15 Classic XA turned out very mediocre results. Despite its higher clocked Core i7-9750H chip, the Aero 15 still failed to beat the older notebooks, largely due to its lackluster performance in the gaming benchmark in PCMark 10 Extended.

Having said that, I should add that this notebook's performance should not be taken as a representation of how the Core i7-9750H performs compared to the Core i7-8750H. As you'll notice here and in the gaming benchmarks as well, the laptop doesn't seem able to keep up with its counterparts, and I think that's a problem that's rooted more in performance throttling due to cooling issues rather than the new chip itself. Furthermore, OEMs have quite a lot of control over how they tune the entire system's performance profile, so it's also possible that Gigabyte just decided to go with something less aggressive.

Either way, I'll have to wait till I get my hands on more notebooks equipped with the 9th-generation Intel Core processors to get a better idea of how the new chip performs. 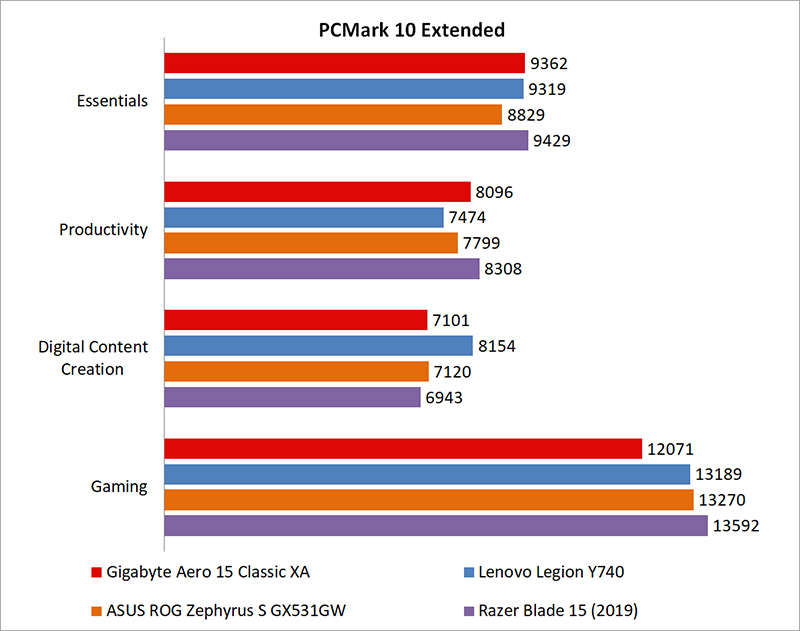 It's really disappointing that the Aero 15 Classic XA still falls behind laptops equipped with the older and lower clocked Core i7-8750H. I can't say for sure what exactly the problem is, especially since there's a slightly confusing array of performance options to choose from.

For starters, there's the AI features powered by Microsoft Azure AI (you'll have to refer to the manual to see what each mode does since it's not immediately apparent), which I tested out with select games. I did notice an increase of a handful of frames in Far Cry 5 and a smaller increase in Deus Ex: Mankind Divided, but the results were pretty much unchanged for Tom Clancy's The Division and Shadow of the Tomb Raider. From my limited testing, it looks like there are inconsistent gains across the board, so I don't think it's that big of a game changer. And even then, in Far Cry 5, which showed the largest benefit, the improved result only brought the Aero 15 Classic XA to the same level as the ASUS ROG Zephyrus S and Lenovo Legion Y740, still an unimpressive result given that the Gigabyte laptop has a more powerful processor.

On top of that, Gigabyte's Control Center software has a section called Device Information, under which you can supposedly control the CPU clock speeds and GPU power draw. Mind you, I only knew this because of the review guide Gigabyte provided me, and it's not stated anywhere in the software itself or even in the user manual. Basically, to theoretically achieve the best possible performance, you want to put the power plan in high performance mode and click the numbered squares to ensure that all of them are lit up in orange. The confusing interface aside, I find it troubling that even after taking these steps to ensure maximum performance, the laptop still underperformed. For good measure, the laptop's fans were even set to run at full speed.

Nevertheless, the Aero 15 Classic XA was still 3 per cent behind the Lenovo Legion Y740 in 3DMark Fire Strike and an alarming 12 per cent behind in Shadow of the Tomb Raider.