This year’s focus is on fast lenses, with all the models capable of shooting at F/1.8 at the very least. So how have the various brands differentiated themselves? Sony has opted for a larger sensor in the Sony Cyber-shot RX100, while the Canon PowerShot S110 has dropped GPS in favor of Wi-Fi capability while retaining an affordable price tag. Both the Panasonic LUMIX DMC-LX7 and Samsung EX2F are capable of shooting at F1.4. FUJIFILM has decided to release an advanced compact under their X- series, the XF1, and today we will be sharing our evaluation of it.

FUJIFILM’s X-series cameras have always sported retro-looks combined with a modern feature set, thus we weren’t surprised to find out that the new FUJIFILM XF1 sports the same popular combination that the X-series is known for. 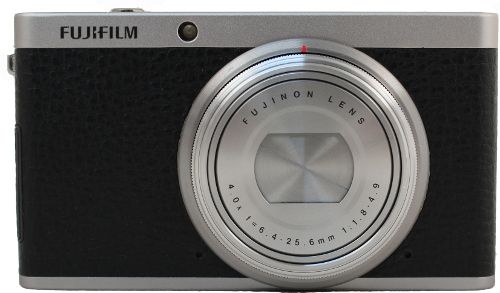 Featuring a 25-100mm zoom with an aperture of F1.8 on the wide end, the XF1 is the only advanced compact to sport retro-licious rangefinder looks. However, it also faces strong competition this year from the other advanced compacts that have been released. So will its vintage styling and feature set mark it as a strong competitor? Let's find out.

The XF1 looks impressive with its aluminium and synthetic leather body, which is reminiscent of old rangefinder cameras. The XF1 is also lighter than it looks, so unfortunately its build quality didn’t feel as 'robust' as some other competitors. Despite this shortcoming, we have to admit that the design of the XF1 definitely bucks the trend when it comes to the standard compact camera design. And even though the XF1 is an advanced compact camera, the top of the XF1 only has a single mode dial in addition to the function button (denoted as 'Fn') and pop-up flash. The Fn button is set to adjust ISO by default, though you can of course assign other settings to it. 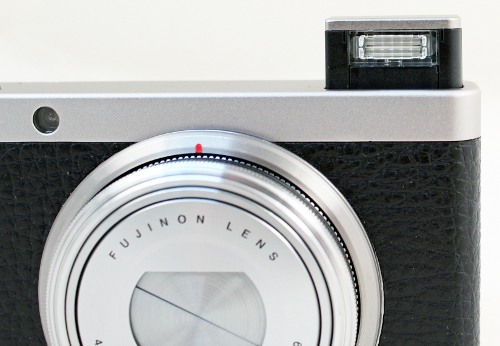 New users may have trouble powering up the camera; we realized the XF1 did not have a power button. After spending five minutes trying to determine if we overlooked the power button or perhaps we had somehow received a lemon by mistake, we gave up and referred to the user manual. It turns out that the lens has to be twisted slightly to the left and pulled out, which will set it to Standby mode. Following that, you can power it on by twisting the lens further left.

While you do get used to powering up the camera this way, we felt a simple power button would have been more straightforward. Turning the lens barrel, pulling it out and then turning it again definitely takes more time than just pressing a button and we foresee a few missed shots because of this. Indeed, we encountered such situations when we were in a hurry to power up the camera, which ended up having to zoom back out because we turned the lens barrel a little too much to the left, thus zooming in accidentally. On the subject of zooming in, with the XF1, it is a manual affair; there are no buttons or switches to press to zoom in, so you will have to keep both hands on the camera to shoot most of the time. 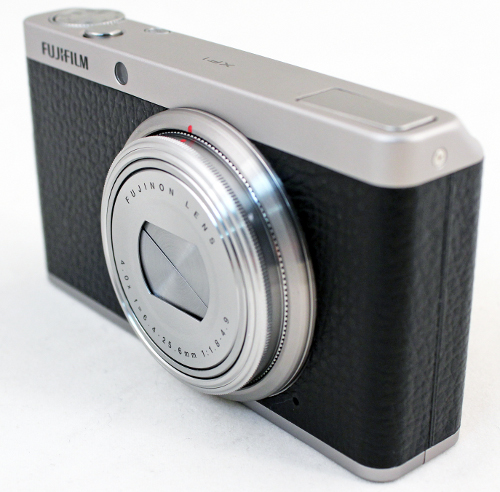 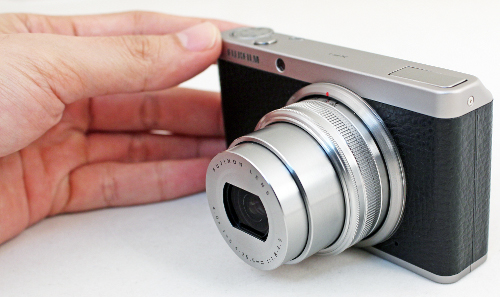 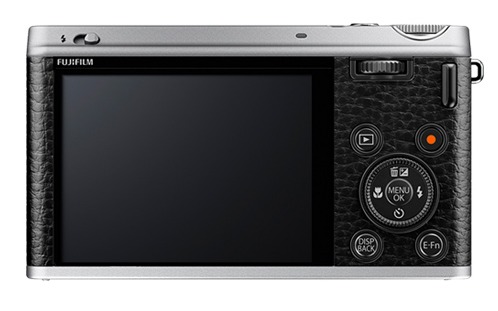 Turning the camera to the rear revealed the 3-inch 460k-dot screen. There are two dials on the rear, one is the familiar control wheel, while the other wheel (called the command dial) is located next to the thumb rest, which allows users to change the settings of the current shooting mode. This command dial is placed in a very handy position; users can adjust aperture or shutter speeds quickly. In a bid to retain the classic rangefinder design, there is no finger grip on the camera and the thumb rest on the rear is in fact, a small bump. But the synthetic leather does lend some grip to the camera, so the XF1 feels less slippery than some of its competitors.

The XF1's has yet another function button at the rear that's denoted as te E-Fn button, but its implementation is slightly different than the Fn button on the top panel. When pressing the E-Fn button, the four buttons around the control wheel, the playback button and the movie button all temporarily take on new functions, which are displayed onscreen. You can assign many functions to the various buttons, which makes the XF1 one of the more easily customizable advanced compact cameras around. Navigation of the camera's menus are quite simple, with all the related settings grouped together, so you won't be spending too much time diving into various sub-menus. 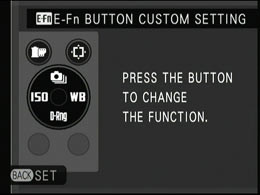