If you own a fairly powerful notebook, chances are you would find that it can get really hot. This is inevitable considering that it has to cramp so much hardware into a compact form factor. To alleviate such heat issues, many notebook users have turned to notebook coolers. Thermaltake, a company with over 10 years of experience in computer chassis and cooling design, has just introduced its latest notebook cooler yet - the aptly named Massive23 LX. 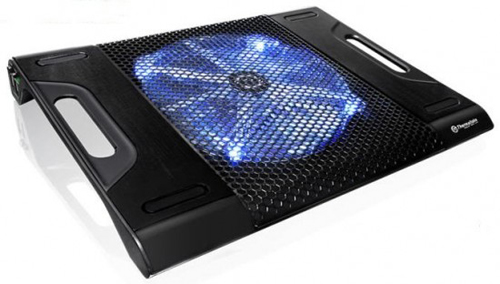 The Thermaltake Massive23 LX comes only in black and it gets its name from its enormous 230mm fan. It is capable of accommodating notebooks from 10 to 17-inches in size. The huge fan also comes with blue LED lights, which gives off a nice blue glow when in use. If you are not a fan of LED lights, there’s a button which lets you turn the lights off.

Like most notebook coolers, the Thermaltake Massive23 LX is angled slightly for ergonomics. The amount of tilt is just about right and we found that it was rather comfortable to type on. However, it could be improved by adding adjustable stands to let users adjust the tilt to suit their personal preferences.

To prevent your notebook from sliding off, Thermaltake has conveniently placed anti-slip rubber mats on four corners of the the aluminum mesh. These rubber mats also props your notebook up slightly to prevent it from getting scratches and also for better air ventilation.

The Massive23 LX’s 230mm fan is one of the largest we have seen in a notebook cooler and it does a good job of keeping your notebook cool. Using a MacBook Pro as our test unit, we recorded around 50 degrees Celsius on the Massive23 LX when doing normal word processing and image editing. Without it, temperatures would hover around 56 degrees Celsius. Of course, your mileage may vary, but our own experience suggests that the Massive23 LX was effective in reducing temperatures.

On top of that, the fan was very quiet to boot, which made us wonder why Thermaltake didn’t include a fan speed selector to let users ramp up the revolutions. This could have allowed the Massive23 LX to be an even more effective notebook cooler.

Despite its large size, we were a bit miffed that the Massive23 LX only came with two USB ports, one of which is required to power the fan. Considering the fact that quite a number of notebook coolers also double up as USB hubs, this is another area which the Massive23 LX could be improved upon.

Overal, the Thermaltake Massive23 LX is a decent notebook cooler. It doesn’t introduce anything new to the genre and probably would have done better with a fan speed selector and more USB ports, but at least it'll do an adequate job of keeping your notebook cool.