Not Quite your Typical GPS

Shinco is one of the biggest electronics manufacturer in China, with a huge stable of products ranging from TVs, hi-fi systems, portable DVD players to GPS navigation devices. Shinco's GPS devices have enjoyed much popularity here in Singapore and today we are evaluating at its newest GPS offering, the SLIM-4390 Instant Fix. 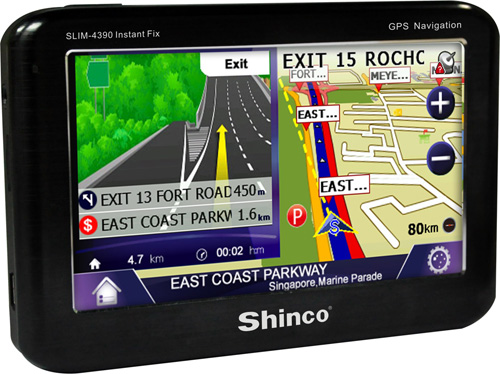 To combat this trend, Shinco has packed the SLIM-4390 Instant Fix with some new features. Apart from the usual music and video playback, the SLIM-4390 Instant Fix can also view photos and comes with a built-in FM receiver. More interestingly, the device also comes preloaded with three simple games - Othello, DuiDuiPeng and Russian block – and even an e-book reader app. Overall, this is one of the more feature-packed GPS navigation devices we've come across.

In terms of its appearance, the Shinco SLIM-4390 Instant Fix has a 4.3-inch wide screen and is remarkably sleek and thin. Hence, it will slip easily into your back pocket, making it a very portable device. It runs on the newer Windows CE 6.0 OS and is powered by a 500MHz SiRF Atlas IV ARM11 processor. As such, it feels much speedier and smoother than older Shinco GPS devices. The unit has a non-removable battery that lasts about two hours before needing a charge.

Navigation duties are handled by the ever competent Mapking navigation software, which comes preloaded with maps approved by the Singapore Land Authority (SLA), and it works well mostly.

There are a few ways which you can use to search for your intended destination. Because the maps are SLA-approved, you can search for locations simply by keying in their postal code; alternatively, you could also just key in the address, or if it's a fairly popular place you're heading to such as the Singapore Zoo, chances are it's already preloaded in the device's extensive Points of Interest list.

The Mapking navigation software also features all the navigational aids that you'd expect from a decent GPS device such as 3D navigation, lane assist feature and speed camera warnings.

Actual GPS performance is commendable. Lock-ons from a cold start could be achieved usually under a minute, voice directions were clear, and re-routing was quick enough. However, there were instances where it would suggest a longer route or an illegal U-turn. This is a pretty common issue with other GPS devices, so it's nothing to be alarmed about.

The Shinco SLIM-4390 Instant Fix is a competent GPS navigation device. GPS performance was good, and we were especially thrilled with the quick lock-on times. On top of that, the new added features such as games and e-book reader app make it a more useful device, though we aren't too convinced that consumers will use it mainly for these extras. This, coupled with its unimpressive battery life is likely to limit the usage of these apps.