Away With Boring Storage Devices!

Away With Boring Storage Devices!

Remember your growing up days when multi-colored stackable blocks were all you ever needed to transform your vivid imagination of building objects into reality? With the market being saturated with external hard drives sporting very ordinary design, LaCie has decided that the time has come to offer consumers something radically different; something along the concept of bricks and aptly dubbed Brick. 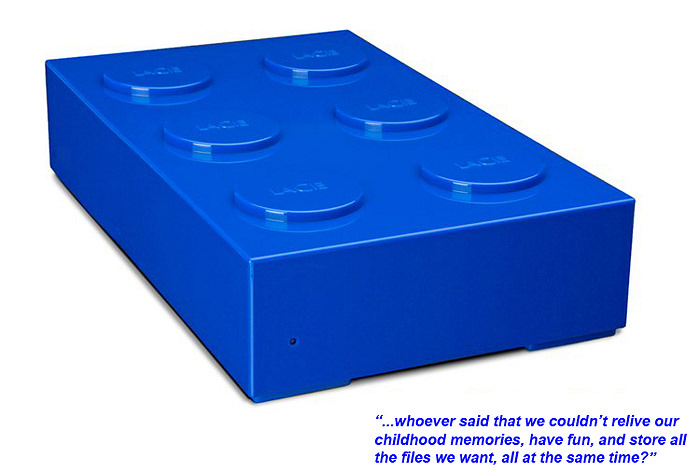 The Brick is available in three colors that also indicate the three available storage capacities: white for 160GB and 500GB, red for 250GB and blue for 300GB. Out of the box, users will immediately find the bright pastel color and façade of the Brick a reminiscence of one’s childhood building block companion. Penned by world-renowned designer, Ora Ïto, each Brick is stringently constructed out of heavy-duty hard plastic, which should provide the Brick with good resilience to rough handling. Up front sits a lone orange LED that lights up as soon as the unit is turned on.

An air vent on the right side of the Brick works together with the internal fan to expel hot air out of the hard drive, thereby keeping each Brick operating within optimum temperatures. The back of the LaCie reveals the power button, the power jack and an USB 2.0 port. These are accompanied by a high-speed USB 2.0 cable, an external AC power adaptor, a CD-ROM containing LaCie’s Backup Software and PDF User Manuals, and a Quick Start Guide Manual.

Our Lacie Brick came pre-formatted using FAT32 file allocation system. Once powered up and connected, Windows 2000 and Windows XP only needed a few seconds to recognize and mount the Brick as a removable storage device. Those still using either Mac OS 9.x or Windows 98 SE operating system will have to first install drivers stored within the bundled CD-ROM before the Brick can be properly recognized.

Build and backup your empire

Within each LaCie brick is a speedy hard drive that boasts 7,200RPM rotational speed and a hearty cache of 8MB, which combine to work to the good of read/write performance. Even though the native USB 2.0 connection is sufficient to see the Brick pairing up with most desktop and notebook computers, we would have liked to see a FireWire connector thrown in for good measure. After all, having another high-speed connection will only make the Brick more appealing and versatile.

More than just a single-minded external hard disk drive, the LaCie Brick comes with its over own LaCie backup software that empowers users to conveniently store and back up music, photos, videos, and files that are important to them. This makes the Brick an ideal backup unit for those who haven't always had utmost confidence in their Windows-powered boxes. However, if the process of backing up is just too lengthy for you, there's always the manual and quick process of simply dragging and dropping files into the Brick and retrieve it at a later time.

Regrettably, for a storage device that allows users to easily backup personal data of up to 500GB, the Brick disappoints by lacking password/encrypting feature. On a brighter note however, the LaCie Brick shone through HD Tach and PCMark04 benchmarks with high read and file copying speeds. As far as we're concerned, the Brick is not only a looker but also quite a performer too.

With its colorful appearance, large storage capacity (up to 500GB), and fast read/write rates, the new LaCie Brick desktop hard drive is sure to charm users who want to add a little spunk to their boring computing boxes. Oh, and did we forget to mention that these bricks are stackable too? Well, whoever said that we couldn't relive our childhood memories, have fun, and store all the files we want, all at the same time? In the "Brick", LaCie certainly does have a convincing reply.