GPS units used to be chunky, unattractive gadgets, but that has changed recently, as companies like Holux are streamlining their designs and making their GPS units more attractive. Garmin is the latest GPS maker to join the fray and this is the ultra-slim and sexy nuvi 3790T. 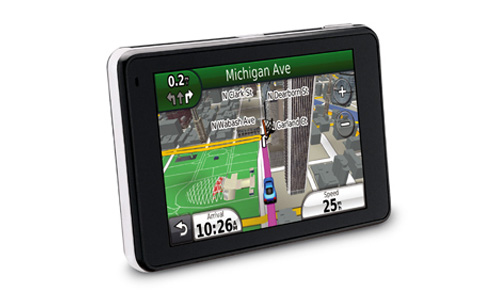 Looking at the Garmin nuvi 3790T, it does not take a genius to know where Garmin got their design cues from. Measuring less than a centimeter thick, and with its clean lines, minimalistic design and large 4.3-inch touchscreen, the nuvi 3790T looks like an upsized version of Apple’s iPod Touch. This is not a bad thing, for the nuvi 3790T looks really special and oozes class. It's a far cry from the days when GPS units were clunky and uninspired-looking devices.

One of the key features of this new navigation device is its multi-touch capable capacitive glass touchscreen, which we found to be very responsive and accurate. However, the nuvi 3790T showed signs of getting taxed when we were browsing and swiping across the map, no doubt due to the amount of detail it has to process since the maps, as we found, are pretty detailed.

Past Garmin devices have been famed for their ease of use and the nuvi 3790T is no different, employing the familiar proprietary operating system that we’ve seen on their older models. The unit also comes preloaded with maps of Singapore and Malaysia.

It was very easy to search for locations and it was equally easy for navigation. The nuvi 3790T features all the modern niceties you’d expect from a premium GPS device such as 3D maps, lane assist, and junction view. Lane assist helps guide you so that you know exactly which lane you need to be in for an upcoming turn, while junction view makes sure you take the right expressway way exit to reach your destination.

Above and beyond the usual navigation features, the nuvi 3790T also receives real-time traffic updates via its integrated FM receiver. For example, roads that are heavily congested will show up as red, while mildly congested roads turn up as yellow. The best thing about it is that it will automatically suggest a quicker route based on the data it has received.

However, this system is not perfect since the nuvi 3790T is only as clever as the data received, and in this case, traffic data is supplied by Singapore's Land Transport Authority (LTA), which, as most motorists can attest, isn't always accurate.

Another nifty thing about the nuvi 3790T is its support for voice commands, which lets you keep your hands on the wheels. This feature can be activated at any point and you can even speak aloud addresses to start navigating. Sadly, we found this to be quite unreliable as it had difficulty recognizing places such as Paya Lebar and Aljunied. Postal codes, on the other hand, were understood perfectly by the nuvi 3790T.

At S$579, the nuvi 3790T certainly comes at a premium price, but it's one of the best GPS devices we have used. All things considered, it looks fantastic, navigates well, and therefore deserves our hearty recommendation.