Vehicle navigation devices using GPS are growing in popularity, thanks to sleeker and more compact designs. Mention the Garmin brand and you'll likely to get a nod of recognition, as the brand has become synonymous with GPS devices. This brings us to our review of the day, the entry-level Garmin Nuvi 200W Personal Navigation Device. 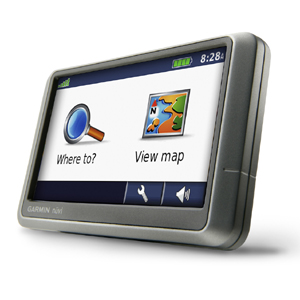 The Garmin 200W is equipped with a 4.3-inch wide touch screen and has sufficient brightness to combat the strong glaring sunlight one might experience in the great outdoors. With no obvious buttons except for the solitary power switch that also doubles as a Hold button, the interface is heavily dependent on the touch screen. The 200W weighs in at a rather light 173g and though it's meant to be an in-car unit, it is neither heavy nor bulky so you can easily carry it in the hands if you prefer.

On screen, the interface comes with minimal icons to keep things simple and clean. Two basic icons, "Where to?" and "View Map" are presented each time you start up the touch screen device. The user interface is extremely easy to use on top of a good general navigational experience with highly detailed maps and quick re-routing times. And being a GPS device first and foremost, the 200W performed well in obtaining and maintaining a clear GPS signal, even with an obscured view of the sky and it took us less than a minute to pick up a signal after switching on.

With up to five levels of map details, the 200W can show you additional information such as side streets that would normally not be visible without zooming. As mentioned, icons are minimal and also placed strategically to keep the map clean for viewing, and thus the zoom buttons (both '+' and '-') are located at the top of the screen. The on-screen keyboard is a breeze to use even with stubby fingers, making address search easy.

Usage mode (found within the Settings) can be edited for automobile, bicycle and pedestrian usage, while Route preferences can be changed to either 'Faster Time' or 'Shorter Distance'. You can even customize the directional cursor to either a car or an arrow.

Beyond its navigation usage, the 200W can also serve as a true traveler friendly device with an image viewer, calculator and currency converter. As expected, due to its status as an entry-level standalone GPS device, Garmin has omitted other features such as Bluetooth connectivity and music playback capabilities which you'll find on higher-end devices at a correspondingly higher price. This is for the better, as the omission of these features keeps the device small and easy on the battery life, where we experienced just a bit less than three hours of GPS connectivity from a full charge.

At a very wallet-friendly price of S$399, the Garmin Nuvi 200W is one of the more affordable GPS devices in the market today, especially when it includes a 1GB SD card preloaded with a Jerome Wee Singapore map which contains nearby locations such as places to eat, petrol stations and more, as well as a Malsing Peninsular Malaysia map. For price conscious users who require a simple GPS device that works with minimal hitches, this is as good as it gets.