With a name like 'Evercool', it's quite obvious what the company specializes in. We too are somewhat familiar with Evercool, having reviewed its Transformer 4 CPU cooler and its Zodiac notebook cooler previously. Despite the quad heatpipes on the Transformer 4, we weren't too impressed with its cooling prowess. Which is why we have our doubts about the Evercool Buffalo CPU cooler that just stomped into our lab. 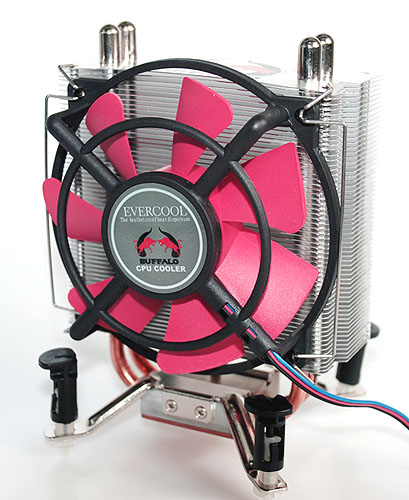 Yes, the Buffalo gets its name from the buffalo branding that puts us in the mind of Red Bull's logo. This buffalo imagery is also inscribed onto the top of the array of aluminum fins. Besides those aesthetic touches, this CPU cooler itself is rather typical of the heatsink fan combo that's common from third-party vendors.

First, there's the stack of aluminum fins, speared though by dual copper heatpipes that connect to the base, which has a copper layer that's in direct contact with the processor. Meanwhile, a 10cm cooling fan rated at a maximum speed of around 1800RPM drives the heat away from the fins. Evercool estimates the cooling fan to produce less than 23 decibels of noise and from our own experience, it's pretty quiet when spinning, at least in our test chassis which has four other system cooling fans.

The overall package of this cooler is relatively light compared to others we have seen, no doubt due to its fewer copper heatpipes. It's also surprisingly designed for just one socket - LGA1366. So it only works on this Core i7 platform, though Evercool apparently has a few other 'Buffalo' CPU coolers in its lineup, with one version meant for the LGA775 socket (Intel Core 2/Pentium D) and another for the AMD platform.

In short, this is not one of those all-in-one coolers that fit all platforms. The downside of course is that you're limited to one socket or platform, but the upside is that installation is very straightforward. More so when the fan comes already affixed to the aluminum fins and there's after all no need to change the retention bracket to suit the socket you're installing it to. Given that this Buffalo cooler supports Socket LGA1366, it comes with four push pins that's exactly what you'll find on an Intel stock cooler. While the installation process was simple enough, we found the push pins on our review unit to be painfully stiff and it took some force to push them down properly.

Finally, how did the Evercool Buffalo fare against its compatriot, the Transformer 4 and an Intel stock cooler? As the graph below shows, it was marginally less efficient than the Transformer 4, and a somewhat decent improvement over the stock. However, we weren't too impressed overall and those who are into overclocking should find a more capable cooler.

At around US$19 on Newegg, the Evercool Buffalo CPU cooler is sufficiently inexpensive but given its average cooling performance, we don't see it as being suitable for more demanding enthusiasts. It's no doubt a slight upgrade over the Intel stock cooler but Evercool should really do better than this.