Cooler Master’s Storm brand was conceived a few years ago in the hopes of providing gamers with specially designed hardware. Early in 2009, we reviewed the Cooler Master Storm Sniper casing, one of the first products of the Storm series. The Storm brand has since gone from strength to strength and the line-up of products now includes a wide range of gaming gear including mice, surfaces and even cooler fans, and one of the latest products to be included in the Storm stable is the Cooler Master Storm SF-19 USB 3.0 notebook cooler, which can only be described as a giant among notebook coolers. 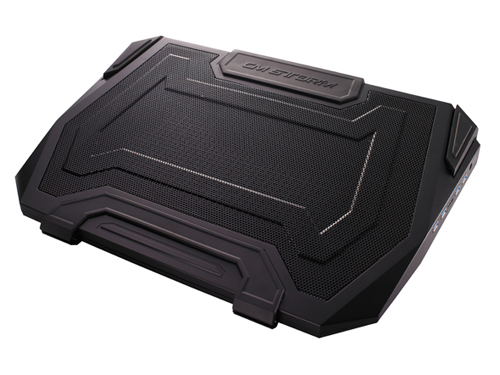 The design of the SF-19 is similar to that of other Storm products and so it has a military inspired design that gives it a rugged look. The "cold forge polygon mesh" dominates the top side of the notebook cooler and it was designed to alleviate thermal build-up spots and allows for high air flow. Five pieces of anti-slip rubber mats help to secure your notebook in place. However, the strips are located near the edge of the cooler and as this cooler is designed to accommodate larger notebooks up to 19 inches in size, smaller ones, such as a 15.6 inch model we tried with, wouldn’t even make contact with some of the rubber mats. Therefore, they might risk scratching the undersides of their chassis against the mesh.

Moving on, you’ll find four USB 3.0 ports on the right. Unlike most other notebooks coolers which are powered via USB, the SF-19 requires a separate DC-in for power. On the left you’ll find buttons to switch the LED lights on and off. You can change the LED color, of which there are seven to choose from, and there is also a dial to adjust the speed of the cooler fans.

Using a notebook with USB 3.0 support and an external USB 3.0 hard disk, we found that a 1.6GB video file takes roughly 38 seconds to transfer. We then connected the notebook to the notebook cooler’s integrated USB 3.0 hub and found that this video file took roughly the same amount of time to transfer. So rest assured that your expensive USB 3.0 storage devices won’t suffer from any loss of transfer speed when using the cooler’s built-in hub. Just how much faster is USB 3.0 you may wonder, well, transferring the same 1.6GB video file with a USB 2.0 notebook with an external USB 2.0 hard disk would take over two minutes.

Cooling performance was decent, though we expected better considering it has two giant fans. Using a Samsung RF510 notebook as our test mule, we found that with the notebook running Prime95  (a stress-test utility that calculates prime numbers) and the cooler’s fan speeds set to somewhere in the middle, the unit would manage around 73 degrees Celsius for the CPU temperature. Without the cooler, it would hover around 77 degrees Celsius. In real terms, with our hands on the palm rest, it did feel cooler to touch with the notebook cooler turned on, but only very slightly. Of course, your mileage may vary, but our own experience suggests that it does reduce your notebook's temperature.

The Cooler Master Storm SF-19 is a competent notebook cooler. However, we can’t help but get the feeling that it is overkill for most consumers. For one, it is simply too big for most notebooks, even 15-inch ones, to seat properly on. Furthermore, notebooks with USB 3.0 ports are still few and far between, but on the bright side, at least this notebook cooler is future-proof.

The way we see it, this notebook cooler is one for the desktop warriors or hardcore mobile gaming enthusiasts who frequent LAN parties with their behemoth 18.4-inch USB 3.0-ready desktop replacement systems. If you fit the above description and have S$129 to spare, the Cooler Master Storm SF-19 won’t disappoint.