One Day Everything Will Be 'Inspired By Jet Planes'

There's not much to differentiate notebook cooler pad designs - essentially, they're all just big fans (or a couple of little fans) that blow air up onto the bottom of your laptop. The Cooler Master X3 tries to change things up by throwing in a few extra design touches. The X3 supposedly draws design inspiration from jet planes, seen in the air intake front vents and the overall angular design. The pad is roughly X-shaped, which doesn't seem to have any particular design advantage, except to give the X3 its cool name. 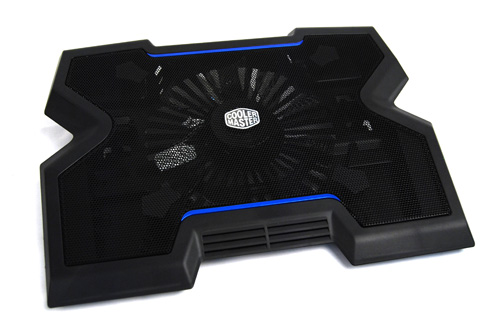 The  X3 supports notebooks sized between 9 and 17-inches and is quite sleek at just over 50mm at its thickest point. It's also fairly light, weighing just 900g, making it light enough to carry around in a notebook bag or backpack if you need a sizeable cooler.

The drawback to that lightness is its mostly plastic construction which makes it feel flimsy. Furthermore, the overall build quality could definitely be better - the joints between the top and bottom of the pad are quite noticeable, with some unsightly gaps visible in between.

"Give Them LED Lights, Everyone Loves LED Lights!"

The X3 has a few extra features, although they're all of varying usefulness.

On the left, front side, you'll find a control panel with an assortment of connections and buttons. A non-powered USB2.0 port replaces the one taken up on your notebook. Next to that, you'll find the Mini-USB port used to connect the X3 (a cable is included in the box).

Next to the USB ports is a dial for adjusting the speed of the X3's 200mm fan. While we liked the inclusion of a fan speed dial, even at full power, it didn't seem that strong, and remained fairly quiet. For something inspired by a jet plane, let's just say, we were somewhat disappointed - there's really no reason to set the fan to anything less than full. 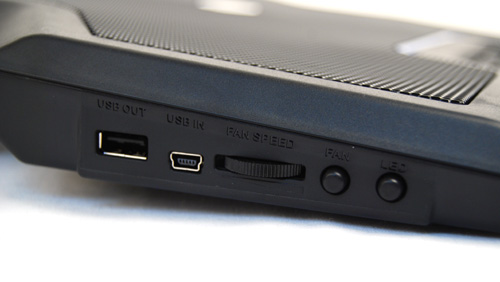 Four blue LED lights can also be turned on here, which shine onto the fan and look pretty cool, although you can't actually see them when there's anything bigger than an 11-inch notebook on top. If you turn off the room lights, you can see some of the blue light shining out the side, which looks quite nice. 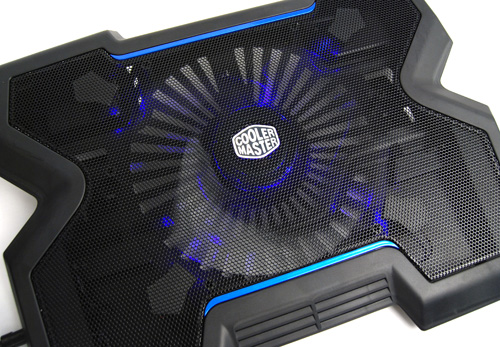 An array of vents at the front of the pad are designed to keep your hands cool by circulating air upwards towards the user, although, realistically they didn't seem to do anything - even when we waved our hands right in front of the vent, we couldn't really feel anything. 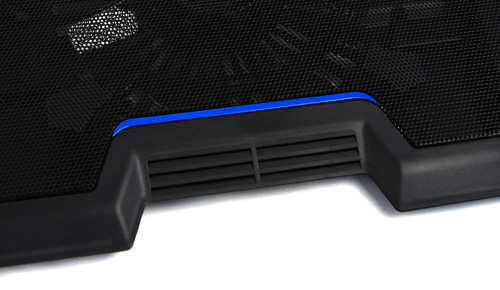 The base of the pad has cable management pillars like Cooler Master's NotePal Ergostand. But where the cables are easy to reach on the Ergostand (thanks to its elevated height), they're quite inaccessible on the short X3, pretty much requiring you to turn the whole thing over if you want to use them. Although two rubber feet at the rear allow for a small amount (about 20mm) of elevation, if you need a cooling pad with more elevation, consider the Cooler Master NotePal Ergostand. 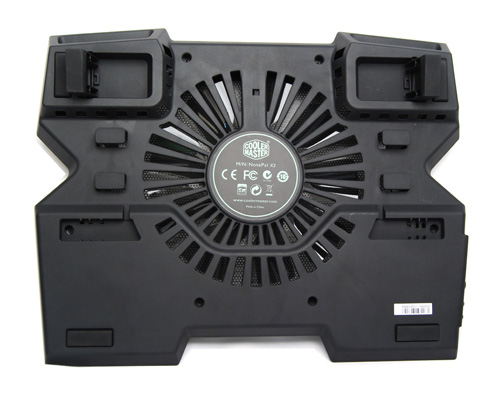