Canon's EOS M was the first mirrorless camera from the Japanese camera giant, and while it was a solid camera in terms of performance, many were skeptical about using the system, as it was a new system and there was a very limited number of lenses available for it. It also had a less than ideal autofocus system and suffered from a lack of stamina – 230 images per full charge to be exact.

Fast forward four years and two cameras later, and you have the Canon EOS M10, an entry-level mirrorless camera that's designed to be easy to use, without compromising on image quality and performance.

The M10 is equipped with an 18MP APS-C sensor, so you won't have to worry too much about ISO performance, but we'll elaborate on this later. More importantly, the camera uses Canon's Hybrid CMOS AF II autofocus system, so focusing is relatively fast and accurate. As for image processing, a single DIGIC 6 processor offers a continuous shooting speed of 5 fps, which should be sufficient for the average user.

As mentioned, the M10 is an entry-level mirrorless camera, so don't expect plenty of manual controls. Most of the settings are accessed via the 3-inch touchscreen and is adjusted by the single dial that surrounds the shutter button. While an odd place to place a dial, it does let you tweak settings pretty quickly, so no complaints there. 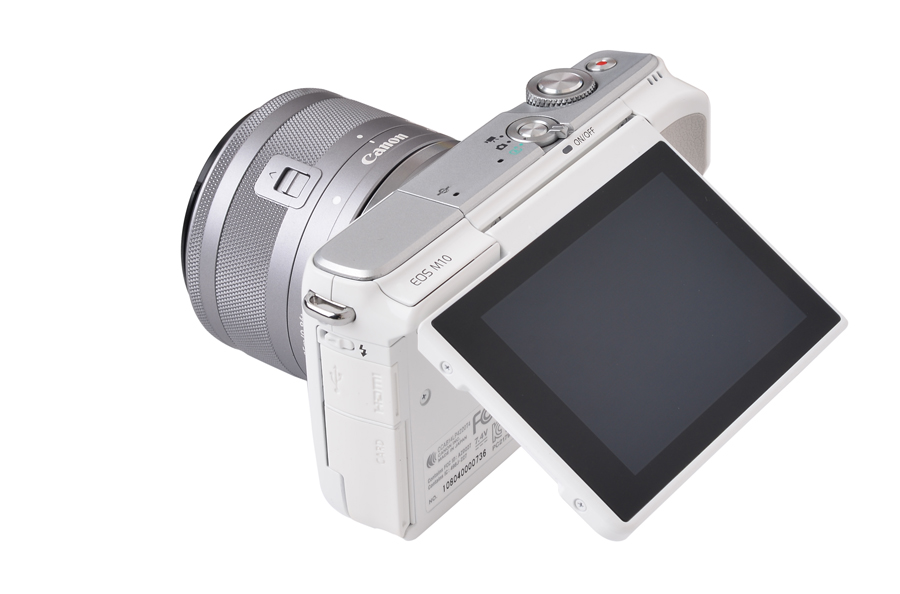 The 3-inch touchscreen can only be flipped 180 degrees upwards, making it easier to snap selfies or wefies. Once flipped, the camera automatically displays the Self Portrait mode, which lets you tweak some settings usually associated with selfies, like background blur, photo brightness, and of course, skin smoothness.

There's also a dedicated button on the right of the camera with an icon of a smartphone. Press this and the camera enters Wi-Fi mode to allow you to connect your smartphone to it. Once connected, you can remotely control the camera, and quickly transfer images from the camera to your phone.

In terms of design, the camera itself feels solidly built, and many would find it easy to carry around, as it weighs about 301g, sans lens. However, those with larger hands will likely wish for a more recessed grip at the front.

There are three settings on the mode dial. The top-most mode lets you shoot video, the middle gives you access to manual, aperture priority, shutter priority and program modes. The final mode puts the camera in Scene Intelligent Auto mode, which basically puts the camera in fully automatic. If you're a beginner, there's no harm in putting the camera in Scene Intelligent Auto mode, but for those who are more experienced, the Manual mode does give you more freedom over exposure settings, which is a great thing.