I've chosen the Predator Triton 500 and Aero 15 OLED XA to show how the GeForce RTX 2070 stacks up against its Max-Q variant. The Forge 15 Pro was also thrown in to provide an idea of how much more performance you're getting by opting for a GeForce RTX 2070 over a 2060.

How good is it for work?

Even in PCMark 10, it's clear that the dual-channel memory does make a difference. The dual-channel configuration was 5 percent faster in terms of overall scores, but it was roughly 8 and 9 percent ahead in the Essentials and Digital Content Creation benchmarks respectively. Furthermore, it's only the dual-channel setup that was able to compete with the other GeForce RTX 2070 Max-Q laptops. AS SSD uses incompressible and completely random data across all its benchmarks. The Intel SSD 660p 1TB in the ROG Strix Scar III was more or less on par with the 760p 512GB model in the Aero 15 OLED XA across all the tests, but where the Intel SSDs really fell short was in the higher queue depth workloads. With the exception of the synthetic 3DMark benchmark, the dual-channel memory configuration was significantly ahead in most of our in-game benchmarks. In fact, Metro Exodus was the only title that didn't show huge differences between the single- and dual-channel configurations. Having said that, even if the problem lies with the way specific games manage memory, I think ASUS should really step up to the plate and offer dual-channel memory by default on the Scar III, cost savings be damned.

In Deus Ex: Mankind Divided, the dual-channel setup was up to 32 percent faster at High settings, a mind-boggling difference. Similarly, in Shadow of the Tomb Raider and Division 2, the performance gap was 36 and 28 percent respectively. The gap also appears to be particularly glaring at less demanding settings.

The additional memory stick gives the Scar III a massive performance boost, where it even outstrips the GeForce RTX 2070 Max-Q laptops by quite a bit in Mankind Divided and Division 2. 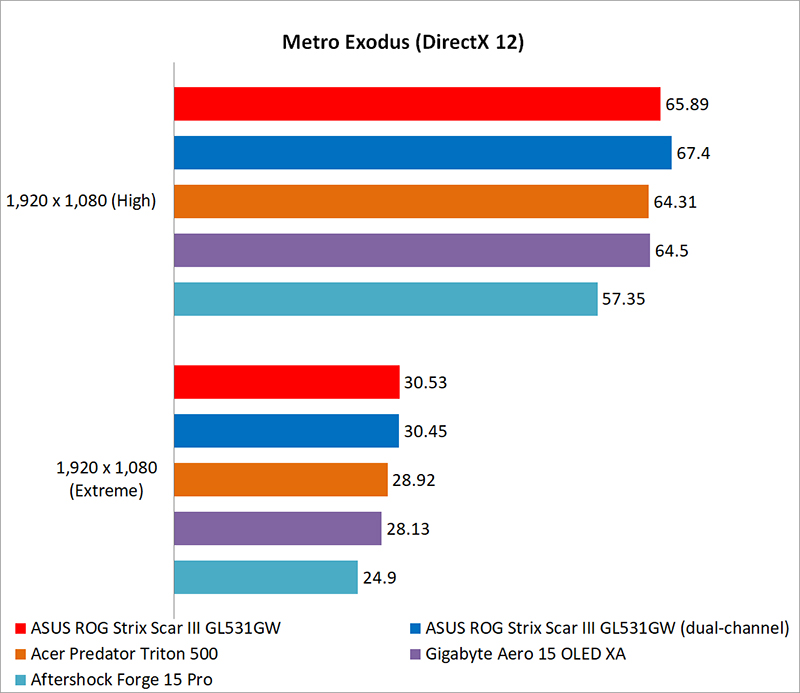