About two months ago, NVIDIA provided us with the GeForce GTX 1080 Ti for review, and needless to say, we were nothing short of impressed. This was a card that was more powerful, if not on par, with the current TITAN X (not to be confused with the TITAN Xp).

It’s sheer power and graphical prowess at running our set of benchmarks, and our list of triple-A titles looked practically effortless for it to maintain a high average frame rate across the board, and in 4K resolution to boot.

It is now May, and like clockwork, we received the first custom-cooled GeForce GTX 1080 Ti to review: the ASUS ROG Strix GeForce GTX 1080 Ti OC Edition. Just as we always do with all our graphics card reviews, we’ll briefly go through the card’s design aesthetics, its clock speeds, and finally jump straight into the card’s benchmark and real-world performance.

Just as it is with other third-party graphics card manufacturers, the aesthetics of the triple-fan ROG Strix custom cooler on this GTX 1080 Ti doesn’t stray very far from the current polygonal design that you see plastered across all of the cards. On top of that, it also has ASUS’ Aura Sync RGB lighting feature built into its backplate and the side. 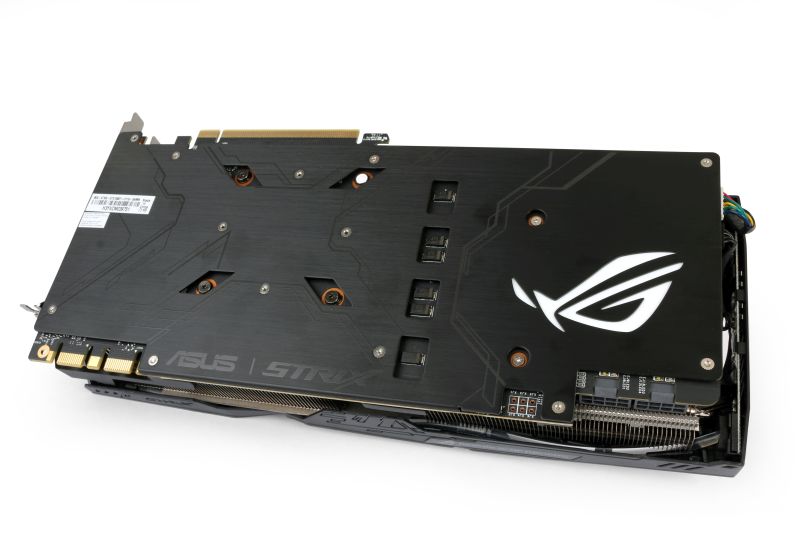 Laboring on the backplate, ASUS’ designers have been making a concerted effort in its design, essentially making it a mark of distinction for the brand and its line.

Specification-wise, the card is kitted out with the same 11GB of GDDR5X graphics memory, based on the GP102 Pascal architecture, with its memory clock set at 11,100MHz (11.1Gbps) in OC mode. Compared to the Founders Edition, however, the card’s base and boost clock speeds are rated at 1,594MHz and 1,708MHz, respectively. The slightly higher clock speed does give this card a slight edge over the Founders Edition variant in the performance department, but during our testing, we discovered that it was hindered by what we would describe as very limited overclocking headroom. For power, the card has two 8-pin PCIe power ports soldered into it, which would mean that the card would be a little more power hungry than the Founders Edition. But more on that later.

But if there’s one caveat that we would take issue with ASUS’ ROG Strix GeForce GTX 1080 Ti OC Edition, it’s the asking price of the card. At RM4,299, the card costs as much as a midrange PC built with hardware available in today’s market (give or take some additional hundreds of Ringgits added to the cost). Connectivity-wise, you get two DisplayPort 1.4, two HDMI 2.0b ports, and (surprise, surprise) a dual-link DVI port.

Write a Review
Compare This | Specifications
Performs as an enthusiast-class graphics card should
Triple-fan custom cooling looks good
Relatively silent, even on full load
Does not have a lot of overclocking headroom
Cost of card is as much as a mid-spec gaming PC