While the Pascal GPU architecture will soon be celebrating its second anniversary, it’s nearly impossible to deny that it is by far NVIDIA’s most popular and (currently) most venerated GPU architecture in the world of gaming.

In the case of the GeForce GTX 1070 Ti, the reason the card came to be wasn’t because NVIDIA wanted to replace its own GTX 1070 (alright, it wasn’t technically the primary reason), but rather, the card was essentially a response to AMD’s own Radeon RX Vega 56.

Back when we reviewed the Founders Edition of the card, its performance was as NVIDIA promised, going toe-to-toe with the Vega 56, both in the synthetic benchmark and gaming categories. On top of that, we had not even overclocked the card.

So then, the question is: if the Founders Edition of the card is capable of pulling off such a performance, how then would a custom-cooled version of the card, such as the ASUS ROG Strix GeForce GTX 1070 Ti, perform, especially once we cranked up the watts?

Where the Founders Edition of all NVIDIA’s GeForce GTX offerings have always sported its iconic polygonal, blower-style, cooler shroud, the ASUS’ ROG Strix Gaming coolers err towards the more extreme side of the design hyperbole. 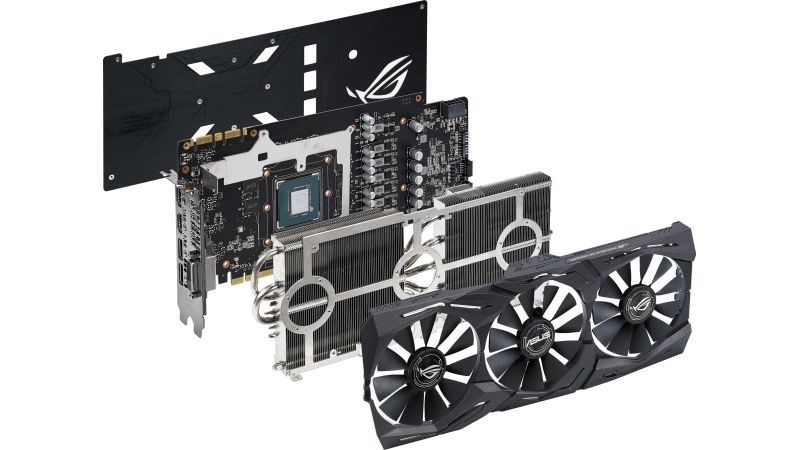 Like all its siblings, the ROG Strix Gaming GeForce GTX 1070 Ti is fitted with ASUS’ patented wing-blade, triple-fan and MaxContact heatsink cooling solution. The fans are also 0dB, which means that they don’t spin up until the card’s operating temperature reaches a specific number (for the ROG Strix GeForce GTX 1070 Ti, that magic number is 55-degree Celsius), and even then, we could barely hear it when we were gaming with it. Beyond that, everything about the card’s aesthetics is essentially a carbon copy (or template, if you’d rather) of all ASUS’ current enthusiast-level ROG Strix graphics cards: backplate, cooler shroud design, the number of ports, and even the heatsink. The specs of the card are identical to the Founders Edition variant (which we reviewed a month back), save for the boost GPU clock speed. With this card, ASUS had it overclocked slightly to 1,782MHz. And, to power it all up, the card only requires a single 8-pin PCIe power port.