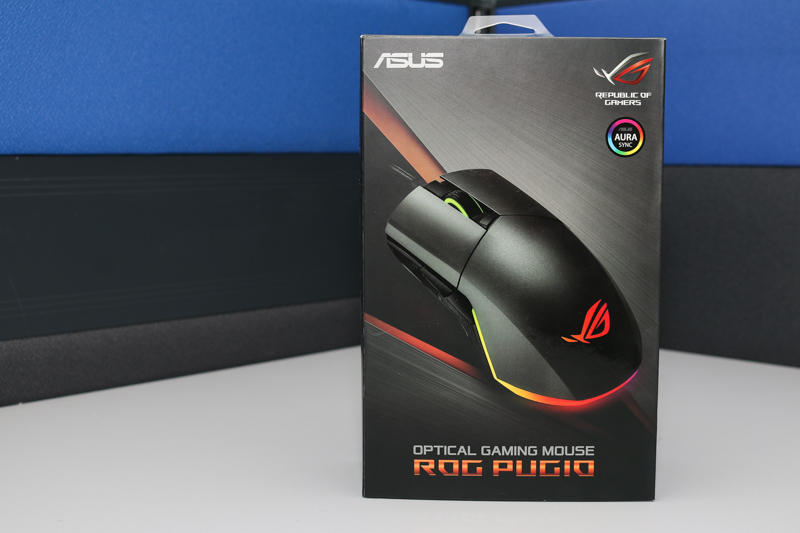 Even though ASUS has already established itself as a household brand when it comes to notebooks, PC components, and consumer networking solutions, there is still one burgeoning market segment that the Taiwanese company has yet to successfully leave a mark on: gaming peripherals.

Don’t get us wrong, ASUS does indeed have quite a comprehensive selection of gaming peripherals in its repertoire, but somehow or rather, they don’t seem to stand out or leave a lasting impression. Just ask yourself: "Is ASUS the first name that comes to mind when you’re looking for a new gaming mice or keyboard?" Probably not.

It’s not that ASUS makes terrible gaming peripherals either. It’s just that when you have to go up against the likes of Razer, Logitech, SteelSeries, and Corsair – who are arguably the Four Heavenly Kings of the gaming peripheral space – you will need to come up with something that’s thoroughly impressive to truly stand out from the crowd.

And ASUS hopes to do just that with the ROG Pugio – an ambidextrous gaming mouse with a laundry list of tricks up its sleeves. 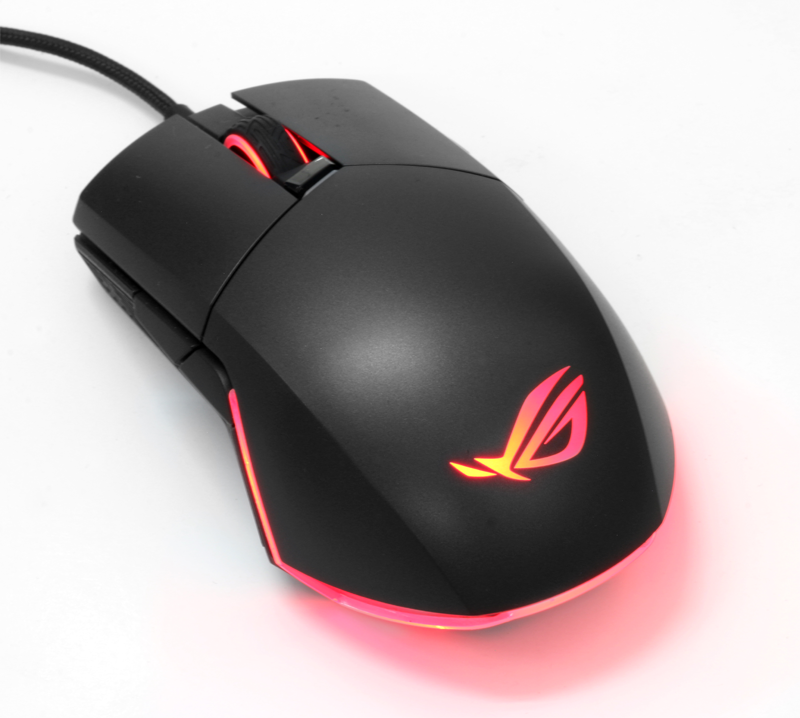 For those of you who are right-handed, you might be wondering: "Why should I even consider getting an ambidextrous gaming mouse, when some of the best gaming mice are inherently designed for right-handed use, and they tend to offer better ergonomics than their ambidextrous counterparts?"

Well, for starters, the ROG Pugio isn’t any ordinary ambidextrous gaming mouse. You see, the problem with most ambidextrous gaming mice is that they generally have thumb buttons on both their side grips to cater for both right and left-handers. Makes sense, until you realize such a layout would inadvertently lead to one too many unintentional button presses by your ring and little fingers, regardless of whether you’re left- or right-handed.

While you could remedy this issue by disabling the buttons through the mouse’s accompanying software, it won’t change the fact that the buttons will still be there, and you will be pressing them. But even though the ROG Pugio does actually have two customizable buttons on both its sides, you can easily swap them out for a blank cover to solve your button woes once and for all.

The interchangeable blank covers will snap into place magnetically, and are strong enough to keep themselves from popping out even when you’re wildly swiping the mouse around while playing Overwatch. You’ll need to intentionally dig them out with your fingernail to get them to come off. 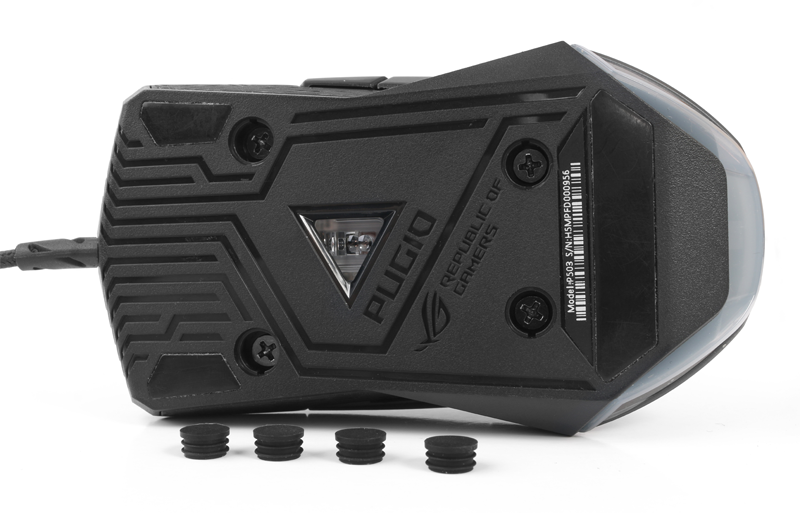 Don’t worry, the process is pretty straightforward, and you don’t necessarily need to have incredibly steady hands to get the job done. First, you’ll need to remove the four rubber covers on the base of the ROG Pugio, which will reveal four Philips screws. Remove the four screws using a Philips screwdriver, and you’ll be able to detach the top half of the ROG Pugio with a firm but gentle tug, revealing its innards. 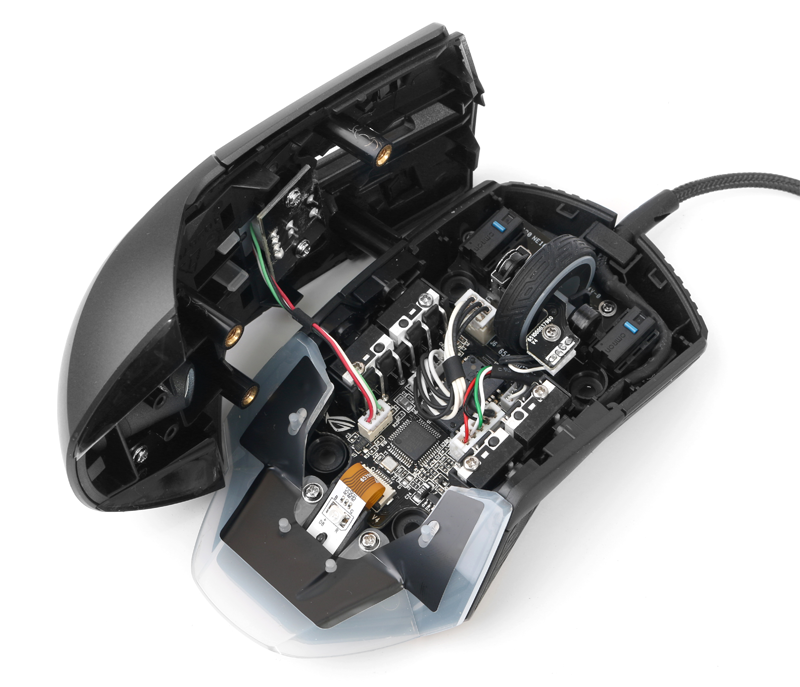 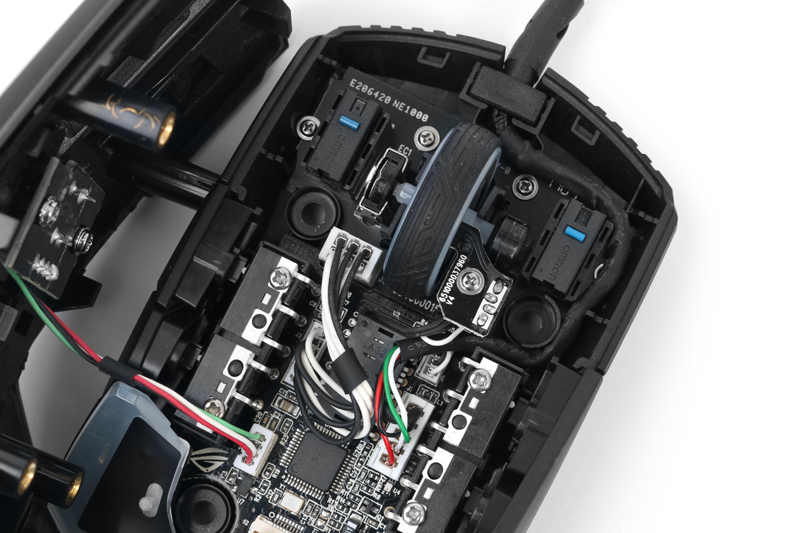 We naturally found ourselves using a claw-like grip to hold the ROG Pugio. It doesn’t have a noticeably high arch like the SteelSeries Rival 300, nor does it have the width or the broad side-grips of the HyperX Pulsefire FPS. Nonetheless, it does feel nice to hold, and we had absolutely no problems using it as our primary pointing device.

Like most other gaming mice, the ROG Pugio offers RGB lighting, which you can customize using its accompanying ROG Armoury software. There are three lighting zones and six lighting modes for you to play around with: Static, Breathing, Color Cycle, Reactive, Wave, and Comet. While you’re free to adjust the brightness of the lights to your liking, there doesn’t seem to be a way for you to adjust the speed of the lighting modes, which is a rather peculiar omission, we have to say. 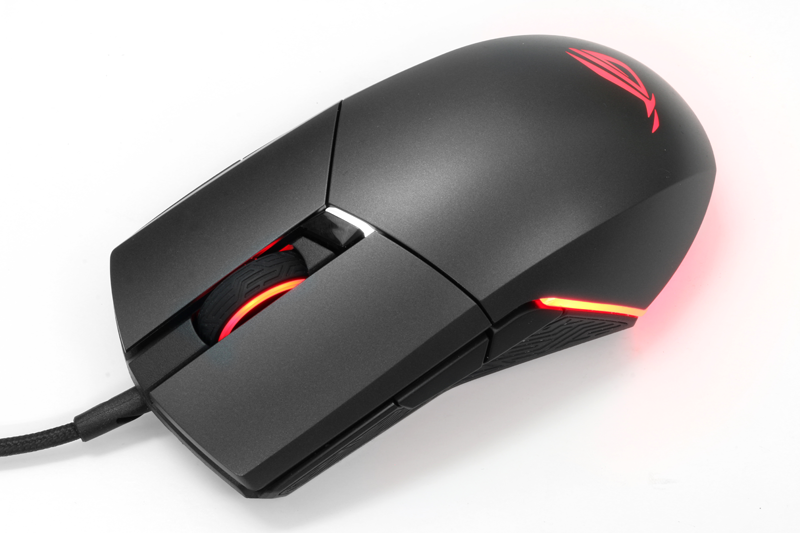 ASUS isn’t saying anything about the make and model of the ROG Pugio’s optical sensor, but did say that it has a maximum sensitivity of 7,200 DPI, a maximum tracking speed of 150 IPS, and a maximum acceleration of 30G – not that these numbers are going to matter all that much when you’re actually using the mouse, anyway.

But what you do need to know, is that it doesn't matter whether you’re casually browsing the web on Chrome, clicking your way through rows and columns of Excel spreadsheets, or decimating your enemies in Overwatch and DOOM – you’re bound to be pleased with the performance of the ROG Pugio. It had no problems tracking our movement, even the erratic wrist-flicks that we made while playing first-person shooters.

We did wish that it had a slightly more spacious side-grip, as there were times when our thumb would inadvertently end up clenching its side buttons while trying to lock onto our hyperactive opponents in Overwatch. And no, replacing the buttons with the blank covers we talked about earlier isn’t a proper solution. 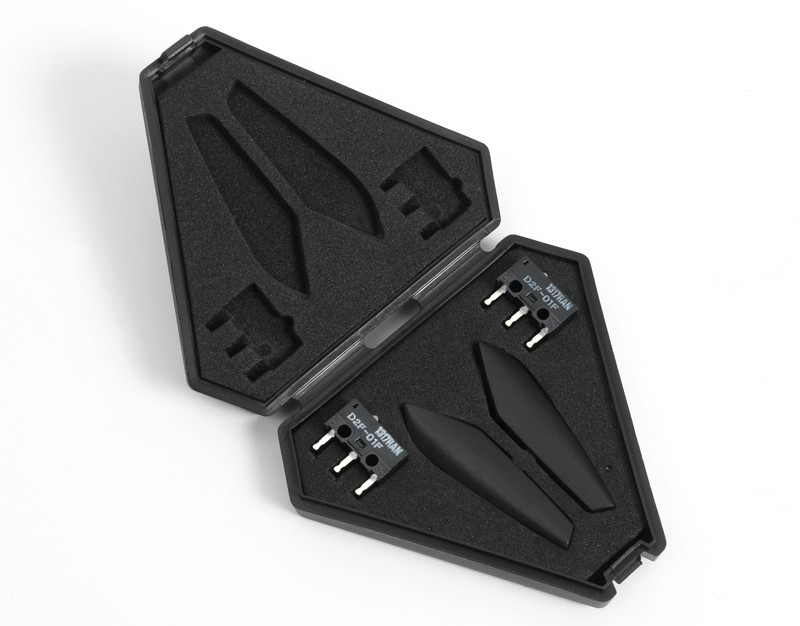 If you’re going to be playing plenty of first-person shooters, you might want to consider switching the default Omron D2FC-F-K switches of ROG Pugio with the Omron D2F-01F, because in our opinion, the latter feels more sensitive and snappy beneath the fingers – despite its marginally higher actuation force. They don’t have that pronounced a click as the as the D2FC-F-K switches, however.

With a recommended retail price of RM439, the ROG Pugio is pretty expensive for a gaming mouse, let alone an ambidextrous one. But it does somewhat make up for it with a noteworthy set of features, which includes modular buttons and switches, as well as RGB backlighting.

Bells and whistles aside, the ROG Pugio also offers solid, dependable performance – a decidedly more important criterion in our books. You don’t necessarily have to be playing games with the ROG Pugio to fully appreciate it merits, because it’s also comfortable and practical enough for general, everyday use. And when the time comes for you to duke it out on the digital battlefield, you can rest easy knowing that the ROG Pugio will always be up to the task.