To get a better understanding of the ROG G752VY’s performance, we decided to have it run the Work, Home, and Creative benchmarks of PCMark 8, which simulates a variety of day-to-day workloads – such as video editing, word processing, and web browsing – to determine how well the ROG G752VY is able to handle them. 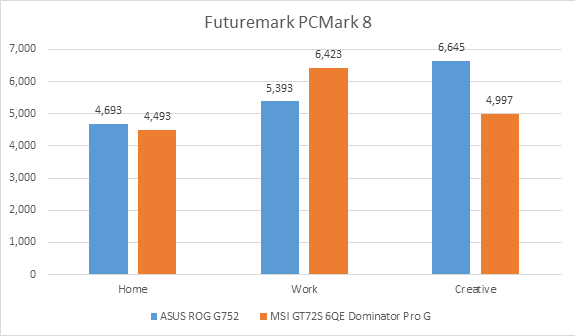 Surprisingly, despite having the better processor, the GT72S 6QE Dominator Pro G only managed to outperform the ROG G752VY in the Work benchmark of PCMark 8.

This is where it gets interesting, because contrary to what you might be thinking, the ROG G752VY and GT72S 6QE Dominator Pro G aren’t actually running on identical GPUs. Yes, they both are equipped with a NVIDIA GeForce GTX 980M, but if you were to look a little bit deeper, you’ll notice that the GTX 980M in the GT72S 6QE Dominator Pro G has 8GB of GDDR5 memory, while the one in the ROG G752VY only has 4GB of GDDR5 memory. Will the extra amount of memory grant MSI the advantage? Well, yes, though not by as significant a margin as you’d think. 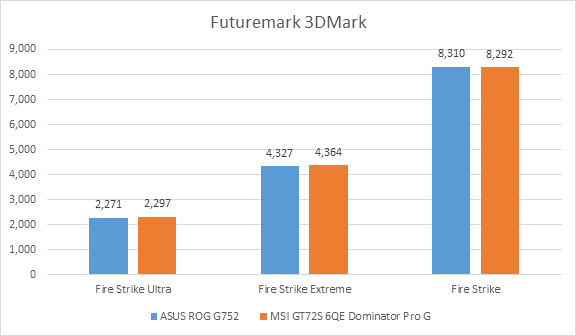 If you could kindly divert your attention to the chart above, you’ll notice that the GT72S 6QE Dominator Pro G only barely managed to surpass the ROG G752VY in both the Fire Strike Ultra and Fire Strike Extreme benchmarks. Though strangely enough, the ASUS managed to trump the MSI in the base Fire Strike benchmark.

The extra GPU memory certainly didn't do the GT72S 6QE Dominator Pro G any favors when it came to the Unigine Heaven benchmark, in that it charted a slightly lower average frame rate than the ROG G752VY. If you were wondering, we ran the benchmark on the Extreme preset, in Full HD (1,080 x 1,080), and with 8x anti-aliasing in place. 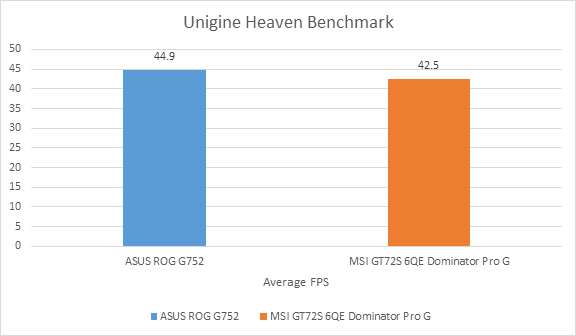 And that brings us to the component of the review that you’d probably be most interested in – how well the ROG G752VY runs the latest blockbuster games. Since we wanted to give the G752VY a good workout, we decided to go with some of the most resource-hungry titles there currently is, such as The Witcher 3: Wild Hunt, Rise of the Tomb Raider, Far Cry 4, and Fallout 4. To up the ante, we ran each of them with their graphics settings maxed out. 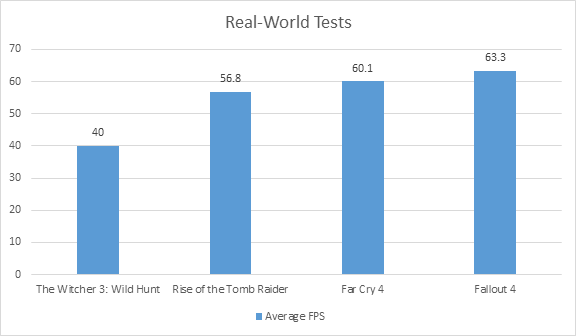 The ROG G752VY only felt the pressure when it came to running The Witcher 3: Wild Hunt, as it could only muster an average frame rate of 40 fps. Regardless, the game was still very much playable with minimal lag or jitter, no doubt thanks to the efforts of the ROG G752VY’s G-SYNC display.

The 8-cell, 6,000mAh 88WHrs battery of the ROG G752VY managed to loop PCMark 8’s Work benchmark for a good three hours and 24 minutes before needing to be recharged, which is pretty impressive.

So, is the ASUS ROG G752VY the gaming notebook for you? Well, if you’re looking for a gaming notebook that can effortlessly run almost every game there is despite having their graphics settings cranked up, then yes, by all means, go for it. It’s pretty much faultless in that regard.

Though you might want to consider thinking things through if you’re searching for a gaming notebook that packs both power and portability, because the ROG G752VY is by no means a portable machine. Even if you don’t mind putting up with its imposing weight, you’ll still need to be on the constant lookout for a table or any surface area that’s spacious enough to accommodate its very large footprint, because you definitely wouldn’t want to be using it on your lap.

This whole issue of portability can easily be averted if you’re going to mainly be using the ROG G752VY as a desktop replacement, but by doing so, you’d be introducing yourself to another problem – one that concerns its steep RM9,099 price tag. For that kind of money, you’ll probably be able to build yourself a fearsome desktop gaming rig of your own and have sufficient enough change to buy a bunch of games to test its mettle.