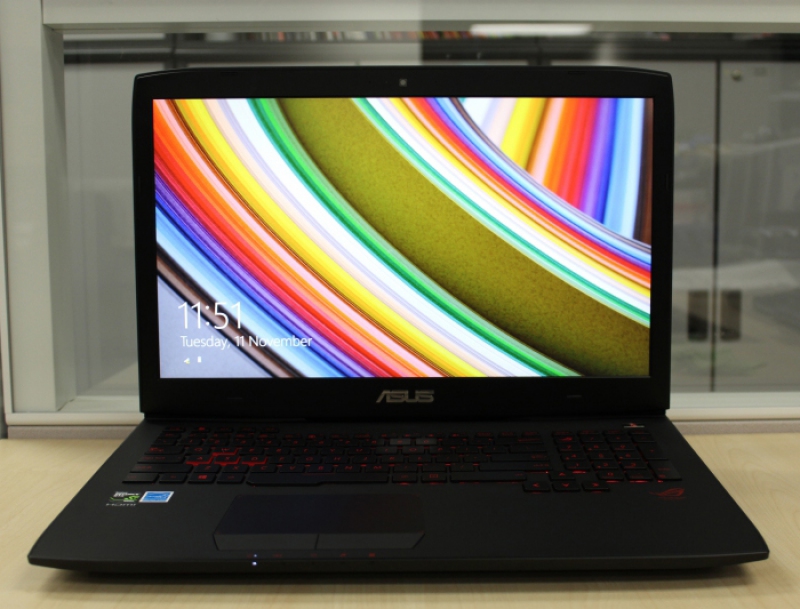 ASUS's ROG line of gaming notebooks is set to release another salvo in their never-ending battle to keep pushing out quality gaming machines. Their latest is the G751 series. Boasting the latest Intel mobile processor, it's also packing a punch with the NVIDIA GeForce GTX 900M series graphics chip. The 17.3-inch IPS screen has a resolution of 1,920 x 1,080 pixels and has a matte finish, which reduces glare and reflections. From these, we can tell that the machines in this series are capable and good looking.

This time around, we take a look at one of them, the G751JT. Costing slightly less than the other variant, the G751JY, it is equipped with an NVIDIA GeForce GTX 970M GPU and a hybrid HDD that would make it difficult to compete against speedier notebooks with a SSD and a top-of-the-line GeForce GTX 980M, such as its own ROG G751JY model. That said, the G751JT is more affordable than our expected G751GY model and that could really open the gateway for those who don't have steep pockets and yet want to indulge in a good gaming notebook. As such we pressed on with the review of the ASUS ROG G751JT.

Here's the table comparing stats for both variants of the ASUS ROG G751 notebooks; again, note that we're reviewing the 'JT' variant, the less powerful model in the right column that's available now:-

Although the two are identical on the outside - same chassis, display, ports, dimensions and weight - their innards are quite different. Crucially, the differences between the two can be traced to three crucial components - the graphics card, the amount of RAM and whether SSD storage is available.

On paper, it seems like a foregone conclusion, but how did the ASUS ROG G751JT fare in the real world?

There'll be no changes for the benchmark criteria in this review. As usual, we're going to be benchmarking the notebook through PCMark 8 (which tests general hardware performance), 3DMark 2013 (which tests the GPU's capability) and then gaming benchmarks using Middle-Earth: Shadow of Mordor and Tomb Raider. 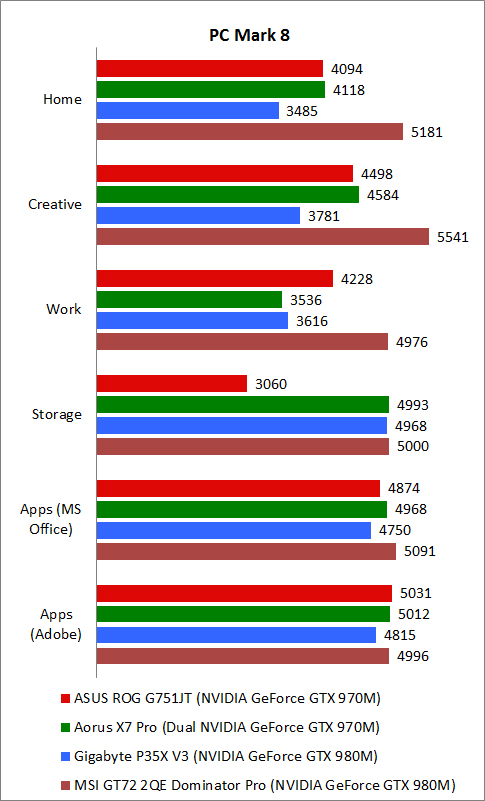 As we've mentioned earlier, PCMark 8 is a general hardware assessment test suite where it runs a set of benchmarks to assess common usage scenarios and then combines the results to give you a score. One thing you might notice is that the ASUS ROG G751JT performs admirably against the superior AORUS X7 Pro, especially considering the processor difference. Scores for the Gigabyte P35X V3 were published before so it wasn't a surprise it scored somewhat low but here you can finally see how it stacks up against the ROG G751JT that seems better tuned. The biggest blow to the ASUS ROG G751JT comes in the Storage benchmark. The other machines all have SSD storage, while the ROG G751JT is stuck with a hybrid drive. This is one of the reasons why we wanted to review the ASUS ROG G751JY instead as that variant has a SSD drive and would've made for a better comparison against the other machines. So apart from the expected poorer storage performance, the ASUS machine tested actually is in good standing at the moment. 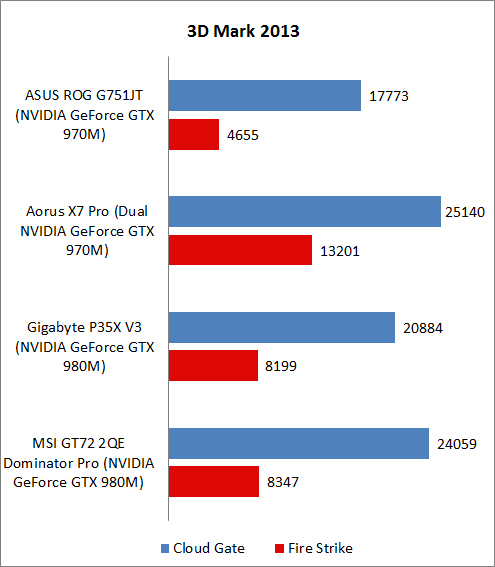 3DMark 2013 is primarily a GPU test and here's where the ASUS ROG G751JT falters against the comparisons for obvious reasons. Having only an NVIDIA GeForce 970M clearly is to its detriment here as the other compared notebooks overpower the ASUS ROG G751JT with little effort. Going by the scores alone, the ASUS ROG G751JT has a up to 70% lower score in the Fire Strike benchmark than the Gigabyte P35X V3 that's running the same CPU but faster GTX 980M GPU. 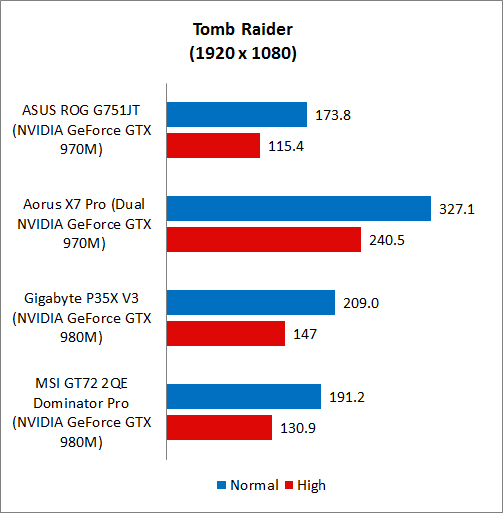 Tomb Raider might not be the most updated benchmark to depict gaming performance as it was meant to run on a different generation of hardware. That's why all the numbers in the graph look mighty impressive. However, it's still a serviceable benchmark and if you look close though, you can see that the differences in notebook hardware do add up for the vast differences in scores. Of course, with even the lowest frame rate numbering upwards of a hundred, it might seem trivial and honestly speaking, at such frame rates you won't be able to tell the difference in actual gameplay. 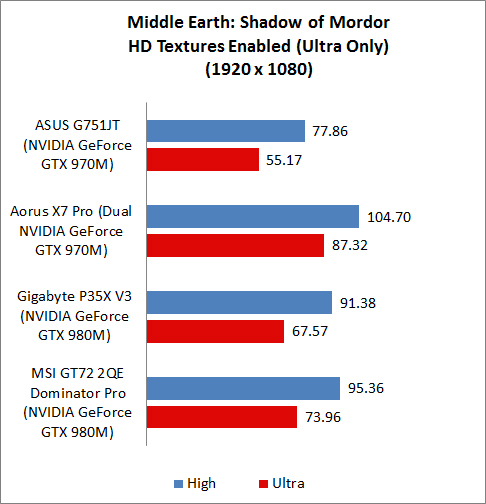 Middle-Earth: Shadow of Mordor is a better gauge for the capabilities of a fairly high-end gaming machine. It's just a few months old, which makes it relatively new, thus making better use of the hardware in the newer machines. The NVIDIA GeForce GTX 970M in the ASUS ROG G751JT clearly couldn't compete against all the higher tier gaming notebooks. It didn't even achieve 80 FPS on High settings and barely broke the 55 FPS mark on Ultra mode. The Gigabyte P35X V3 might lead it by just 12 frames per second on Ultra, but bear in mind that this actually translates to a rather significant 21% performance advantage. Furthermore, this puts the Gigabyte P35X V3 pass the sweet 60 FPS mark. 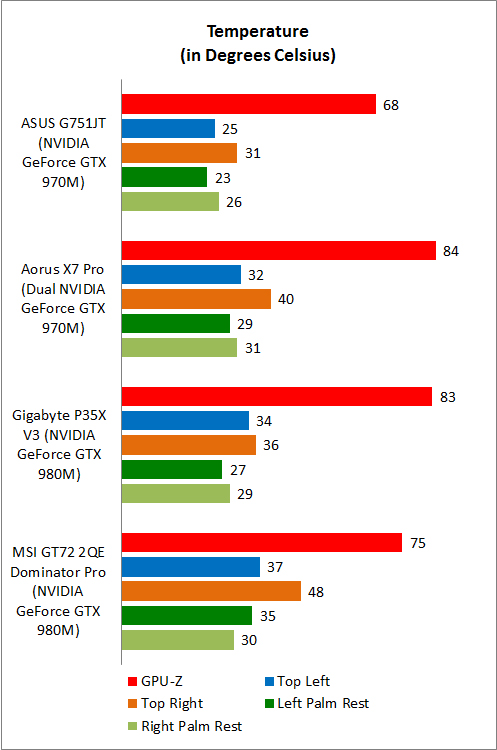 Thanks to its chassis design (and possibly the large exhaust vents in the back) the ASUS ROG G751JT beat out all the other contenders in both the GPU-Z temperature test as well as the manual measurements we noted by a large margin. It recorded just 68 degrees Celsius on GPU-Z, which is a fair bit lower than the other notebooks here. While all this sounds good, the important differentiating factor to keep in mind is the notebook's less powerful GPU that would have helped achieve the temperature figures.

Now that we've seen the hardware put through their paces, the next section will focus on power consumption and other related aspects of the ASUS ROG G751JT.