As a point of reiteration, the 1800X is merely one of three of the Ryzen 7 CPUs that will be available globally at the time of this review. Specifically, the Ryzen 7 range of CPUs include the 1800X, 1700X, and the 1700. Each of the three CPUs are (technically) designed to go head-to-head with an Intel CPU of equivalent value and power, but all three of them are based on AMD’s all-new 14nm Zen CPU architecture and lithography.

There are several features that will be pointed out regarding Ryzen, but we’ll start by informing you (if you didn’t already know about it) that all of AMD’s Ryzen processor are unlocked and can be overclocked. To be clear, it’s not just the CPU under the Ryzen 7 SKUs that will be overclockable, but each and every CPU that is and will be available within the year.

Long story short, all CPUs under the Ryzen 7 and the soon to be released Ryzen 5 and Ryzen 3 line will all be unlocked for overclocking.

Like its predecessors, the 1800X physical designs uses the same PGA (Pin Grid Array) layout, in which the pin connectors are attached to the CPU, as opposed to Intel’s use of the LGA (Land Grid Array) that places the pins for Intel CPUs directly on to the motherboard.

There’s also AMD’s new SenseMI (pronounced as Sense Em Ai, and not Sense Mee), a new feature comprising five sensors and adaptive prediction technologies, baked directly into its Zen architecture. The takeaway highlight of SenseMI, however, is the Extended Frequency Range feature, or simply XFR. Essentially a built-in overclocker, it is this particular feature that is what helped AMD to make this 1800X capable of coming up to par with the competition’s own high-end CPUs. But more of that on the benchmark page.

We won’t talk too much about SenseMI in this page as we’ve already written about this technology in an earlier post. So, if you want to know more about it, you can simply visit that page. 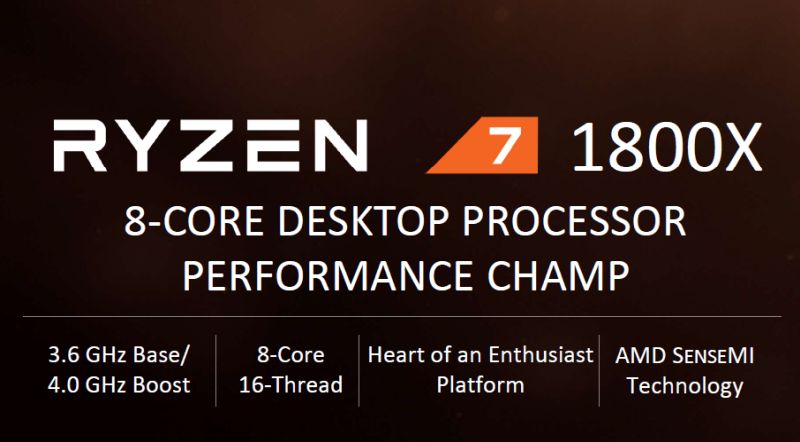 Getting back to the Ryzen 7 1800X that we have: as mentioned earlier, this is Team Red’s top-of-the-line CPU that sits at the top of its Ryzen 7 pedestal.

Like its predecessors, the 1800X physical designs uses the same PGA (Pin Grid Array) layout, in which the pin connectors are attached to the CPU, as opposed to Intel’s use of the LGA (Land Grid Array) that places the pins for Intel CPUs directly on to the motherboard.

Out of the box, the 1800X has a default clockspeed of 3.6GHz at base, and a boost clockspeed between 4.0GHz and 4.1GHz. On paper, AMD claims the latter boost, but during testing and running it as is (before overclocking it), we noticed that the 1800X was actually capable of hitting the 4.1GHz marker without any trouble. One of the many pride points AMD has with its new CPU architecture is how it had actually exceeded the company's initial expectations with the CPU. In comparison to the now archaic Excavator core architecture, AMD states that Zen was achieving 52 percent more IPC (Instructions per Clock) than its last generation CPU architecture.

In particular, the 1800X’s architecture is driven by an 8-core, 16-thread setup, and each core drives up to two threads per core, thanks to Simultaneous Multi-threading (SMT). It also a bigger 8MB L3 cache that drives the on-board CPU Complex (CCX).

Lastly, before we jump into the benchmarks, the 1800X is also relatively power-efficient, with a TDP rated at 95W. This is an incredibly impressive feat on AMD’s part, especially for those of us who remember its equally, incredibly power-hungry FX 9590 CPU and its voracious 220W TDP.