So, at last, we get to the main course of the reviews: benchmark and performance numbers.

Now, for those of you who have already made pre-orders of your Ryzen 7 1800X CPU, we’ve noted in our event coverage of AMD’s Ryzen tech day (that is, if your vendor hasn't already informed you) that this crème de la crème CPU does not come bundle with either of AMD’s new Wraith RGB coolers. In fact, AMD has stated that only its Ryzen 7 1700X and 1700 CPUs will be bundled with its Wraith Spire cooler, and not its Wraith Max cooler.

That’s because AMD is shipping out the 1800X under the pretense that those of you who are getting the CPU intend to use a custom cooler for it. On that note, there will (and should) be several third-party coolers already available at launch, with Noctua, Corsair, and Cooler Master being several of the brands that have manufactured custom coolers for AMD’s new AM4 layout.

In our case, we tested the 1800X with the sample kit that was provided to us, along with several of our own components:

We ran our usual set of benchmarks to see how the CPU fares on a synthetic level:

We also ran a few game titles in order to also see how the 1800X handled itself in real-time:

Lastly, we manually overclocked the 1800X’s clockspeed from 3.6GHz to 4.05GHz, and increased its core voltage from 1.2V up to 1.45V. It should be mentioned that AMD had provided us with a sample of its new Ryzen Master CPU overclocking utility for a less tedious overclocking experience, but when we overclocked the processor, we did so via the on-board BIOS of the motherboard. We also overclocked the two Intel CPUs clockspeed, increasing them by just as much as we did with the 1800X.

Be advised, however, that if you intend to manually overclock the CPU, the aforementioned XFR function will disable itself until you return the CPU back to its optimized default state. On that note, this is the only way you will be able to disable the XFR feature. Love it or leave it, XFR is on by default and cannot be disabled, even if you have no intention of overclocking.

As you can see from the charts, the 1800X either outperformed or matched both Intel CPUs in almost each and every benchmark. On the 3DMark tests, the 1800X clearly outpaced both the Core i7-5960X and Core i7-7700K. 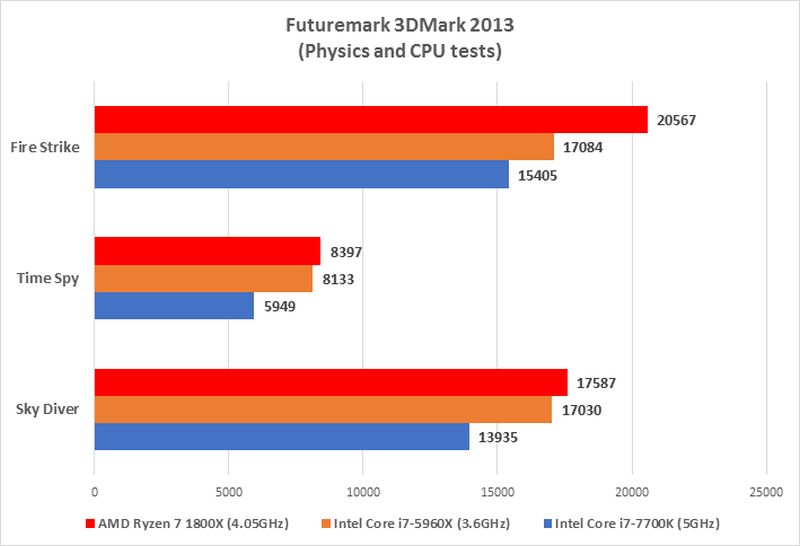 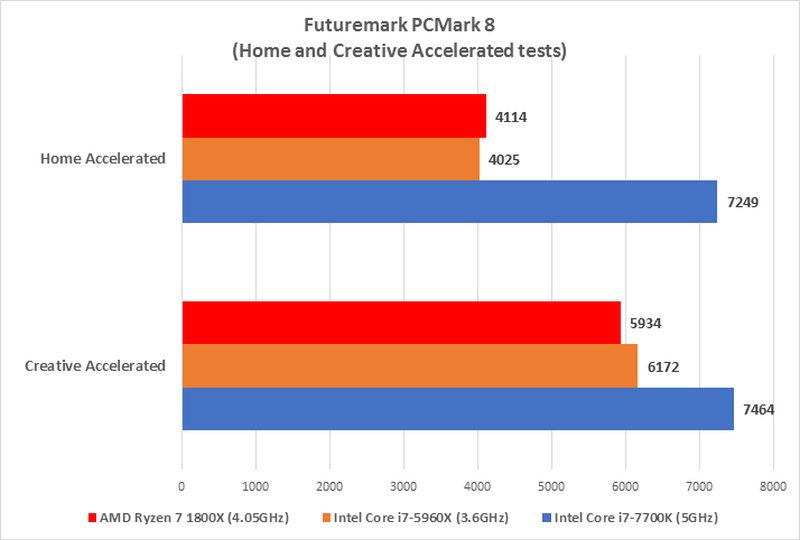 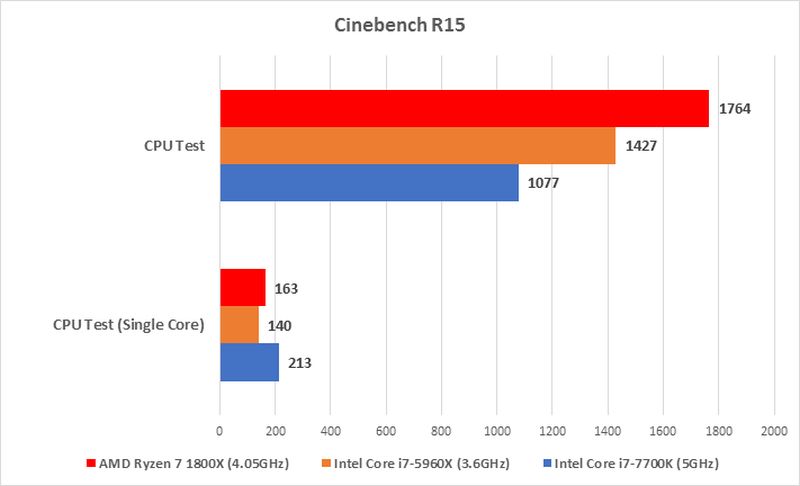 Also, as we’ve mentioned, we’ve been using an ASUS ROG Strix Gaming RX 480 graphics card, in a spirit of keeping this test an ‘all AMD’ build.

It is in this section that the 1800X surprised us yet again, outpacing both Intel CPUs in the majority of our list, as well as in WQHD and Full HD resolutions, but it wasn’t without some trouble with a couple of games.

Ashes of the Singularity initially didn’t run on the DirectX 12 API for all the CPUs, but we still managed to get it to run after that. Doom was the second game to trouble us during testing in the initial phases, crashing several times whenever we changed resolutions on the fly, specifically with the 1800X. We initially thought that it was an issue with the GPU, but the issue never came up while testing it with the Intel CPUs. 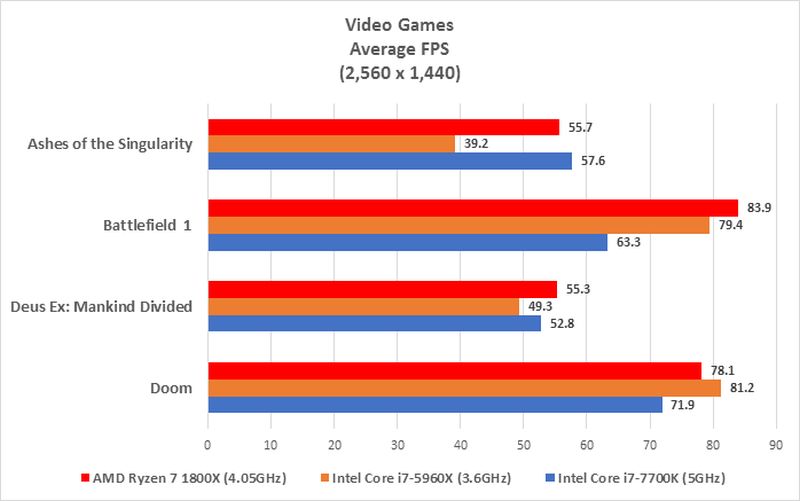 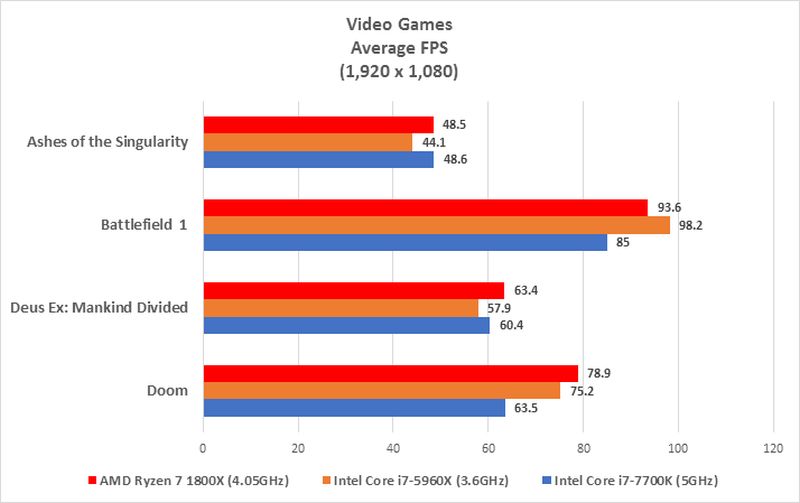 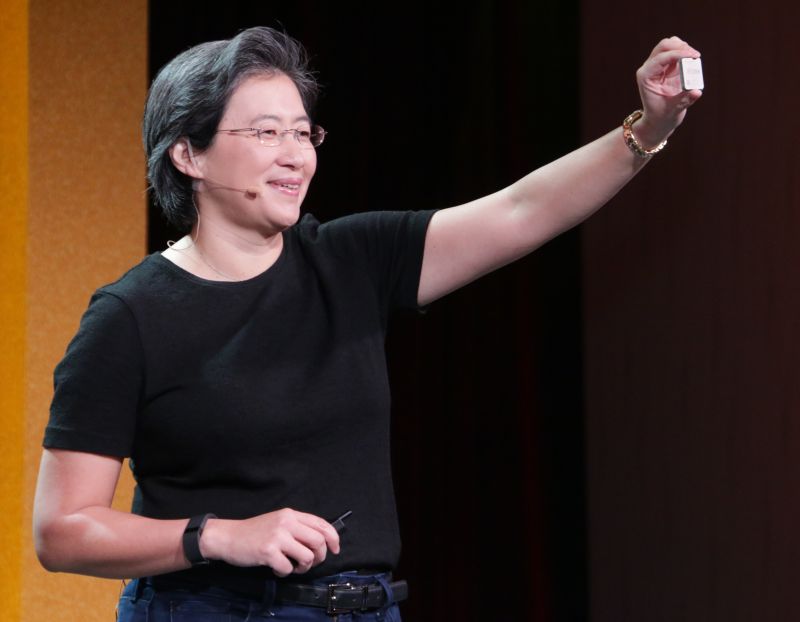 At a price point of RM2,599, the Ryzen 7 1800X is not cheap by any definitive measure, but there is no denying that it’s still an arm and a leg less costly than one of Intel’s top-of-the-line Extreme CPU (even with the recent price cuts).

The overall performance of the 1800X is breathtakingly impressive, and it’s a feeling that we’ve not seen done with an AMD CPU in a very long time. The new XFR feature shows great promise too, and the fact that it is able to prevent down throttling below the 3.6GHz by default is something that we think gamers will appreciate.

If there was one gripe about the 1800X that we have, it’s that we couldn’t push it past beyond the 4.1GHz mark. Despite our fervent efforts (and increasing the core voltage way past what AMD recommended), the system would still reset itself the very minute we try to run our benchmarks at that speed.

AMD has been waiting to make a comeback in the CPU department for years. If our performance of the 1800X is anything to go by, it’s highly likely that Ryzen is going to help the company regain the trust and support of the consumer market, as well as the PC gaming market. Suffice to say, we definitely can’t wait to see what sort of performance number AMD will be presenting with its yet-to-be-announced Ryzen 5 and Ryzen 3 CPU lineup.