Acer Predator 21 X: Gaming notebook with all the trimmings 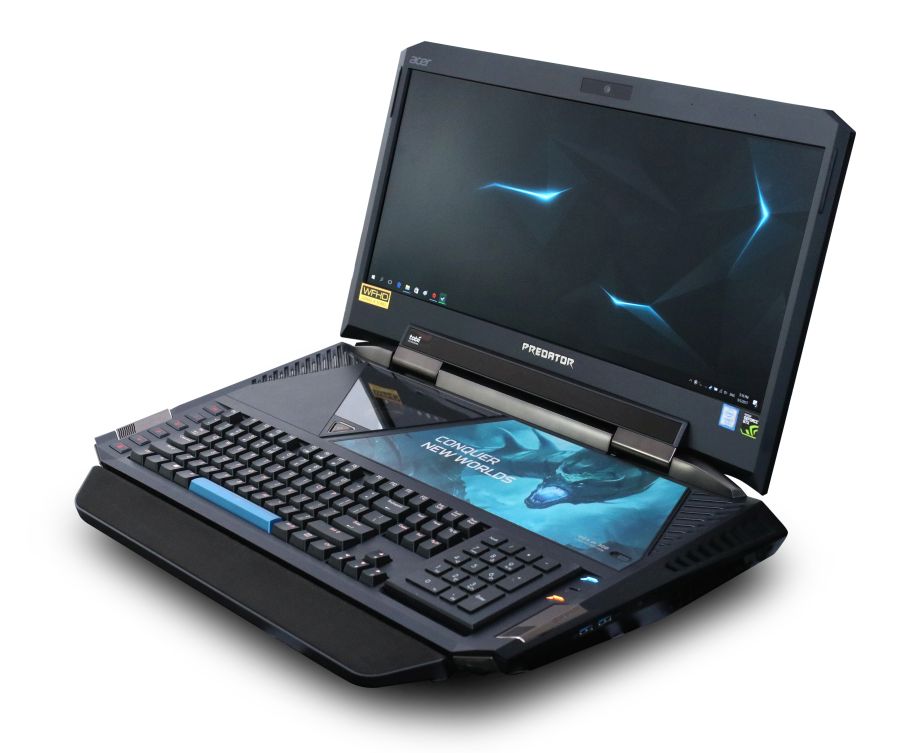 In an era where almost every notebook manufacturer has their own dedicated lineup of gaming notebooks, it can be pretty hard to stand out from the crowd without taking a leap of faith and defying conventions. And that is exactly what Acer decided to do with the Predator 21 X – the first notebook in the world to have a curved display. But before we could indulge ourselves in the monstrosity that is the Predator 21 X, we first had to free it from its imposing ultra-durable, hard-shell Pelican carrying case, which is literally big enough to contain a small child or two. And in case you were wondering, every Predator 21 X comes shipped inside its own customized Pelican case.

Let’s not beat around the bush here: the Predator 21 X is a genuinely massive gaming notebook. It weighs a whopping 8.5 kg, and has a thickness of 83mm – definitely not something you would want to carry around often, if at all.

There are a number of factors that contribute to the big and burly stature of the Predator 21 X, with one of them being its expansive 21-inch curved NVIDIA G-SYNC IPS display, which has a resolution of 2,560 x 1,080, a refresh rate of 120Hz, and a 4ms gray-to-gray response time. It’s worth mentioning that the 2,000R curvature of the display isn’t as drastic as you might imagine it to be. We would say it looks tastefully subtle, which isn’t necessarily a bad thing. 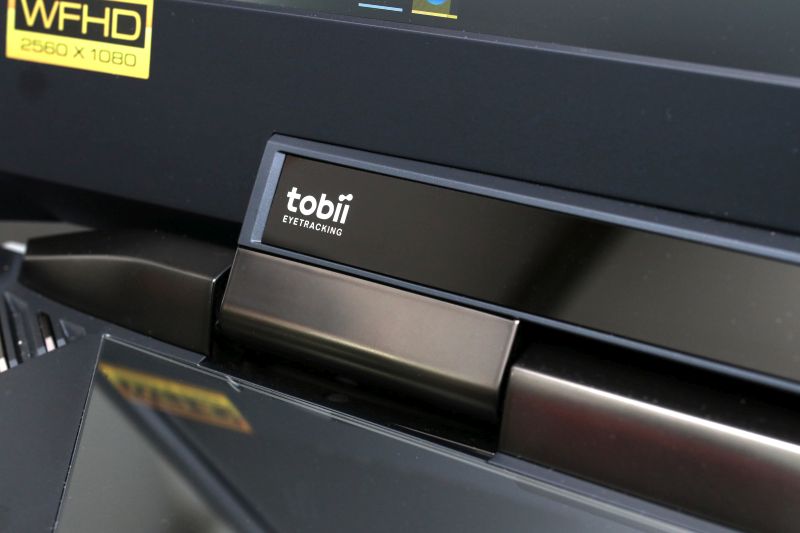 Then there’s its hardware: the Predator 21 X is powered by an overclockable 7th generation Intel Core i7-7820HK processor, and is accompanied by two NVIDIA GeForce GTX 1080 graphics cards running in SLI, 64GB of DDR4-2400 RAM, two 512GB NVMe SSDs running in RAID 0 configuration, and a 1TB 7,200RPM hard drive. Considering the sheer size (and price) of the Predator 21 X, we honestly weren’t expecting anything less.

The Predator 21 X isn’t all about performance. It’s loaded to the gills with an assortment of nifty features as well, including an RGB backlit mechanical keyboard with Cherry MX Brown switches that puts the chiclet keys of all other notebooks to shame. As you would expect, typing and gaming on the mechanical keyboard of the Predator 21 X was a thoroughly enjoyable experience, and we would gladly do so continuously for hours on end.

Look to the left of the Predator 21 X’s mechanical keyboard and you’ll notice a column of programmable shortcut keys. These keys can be customized using the Acer PredatorSense software to perform a variety of different functions, like launching a specific program, enabling or disabling a particular setting, or cracking up the cooling fans to run at their maximum speed. There are three color groups and five shortcut keys in total, effectively allowing you to assign 15 different shortcuts.

The PredatorSense software is also where you can overclock the Core i7-7820HK processor and dual GeForce GTX 1080 GPUs of the Predator 21 X with literally just a single click – handy for those of you who aren’t too familiar with the inherent complexities of overclocking. 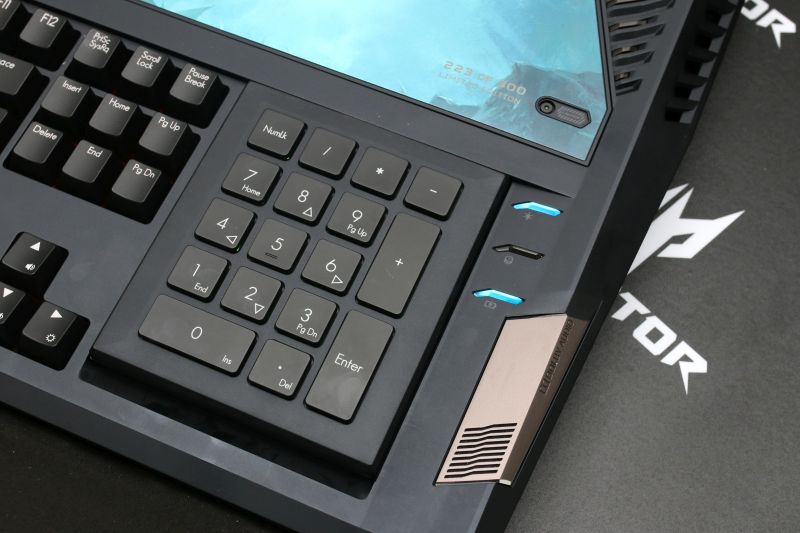 The Predator 21 X is big on audio quality as well, thanks to its combination of four speakers and two subwoofers that sounds incredibly loud and full-bodied, so much so that you probably won’t need to resort to using an external speaker setup. You can customize the sound signature of the Predator 21 X to your preference by playing around with the various audio presets of its Dolby Audio Premium software. And yes, there’s actually a perceivable difference between the presets.

With such a chunky chassis, the Predator 21 X has no trouble accommodating all the connectivity ports that you could possibly need, including four USB 3.0 ports (one with power-off charging), one USB 3.1 Type-C Gen 2 Thunderbolt 3 port, an SD card reader, an audio in/out port, two DisplayPorts, one HDMI port, and of course, the all-important Ethernet port.

For a machine with such formidable hardware purring underneath its hood, we were quite surprised that the surface of the Predator 21 X never felt uncomfortably hot to the touch, even while it was running benchmarks and games. We believe this has something to do with its five system fans (three of which are AeroBlade metal fans) and nine heat pipes working their cooling magic. 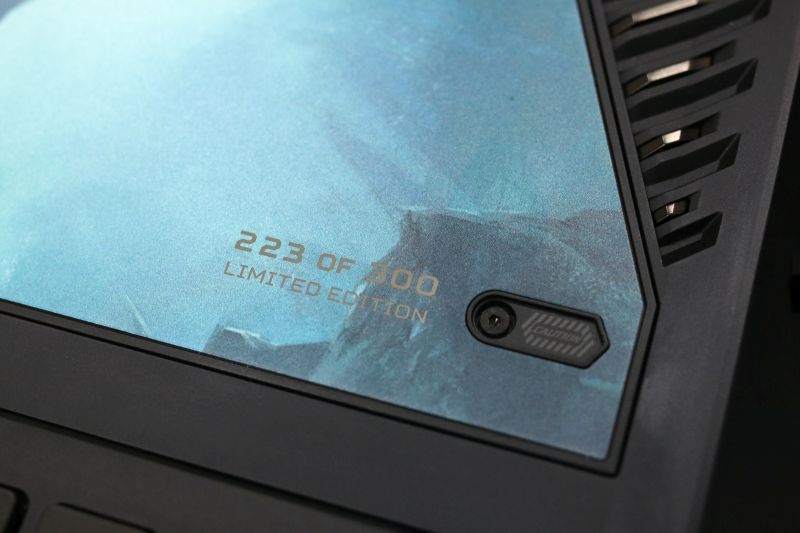 For a better look at this notebook, you can check out our video below: