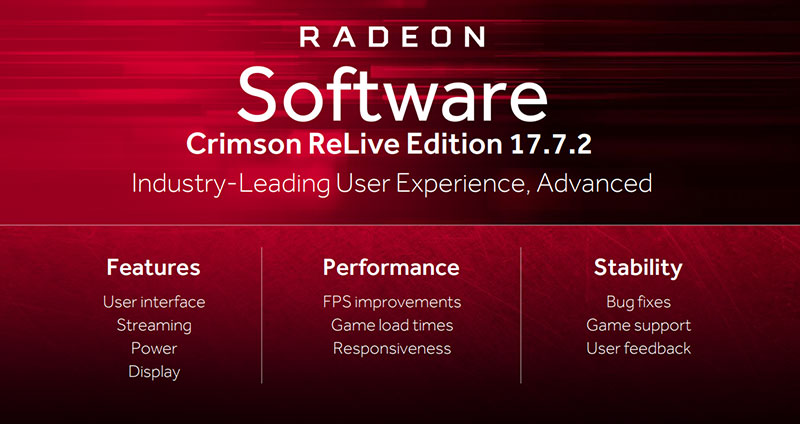 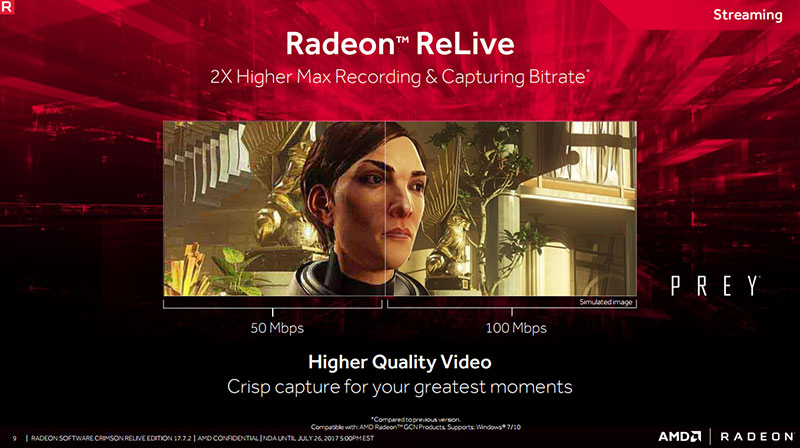 One of the biggest features of the original ReLive Edition release was the built-in stream capture tool, and version 17.7.2 increases the quality of your recordings by doubling the maximum bitrate, from 50Mbps to 100Mbps.

This means greater graphical fidelity, which will enable you to create higher quality streams and videos.

In addition, new controls have been added for video overlay transparency. In the case that your webcam image obscures particular elements of the heads-up display (HUD) in the game, you can increase the transparency for improved visibility of key details. 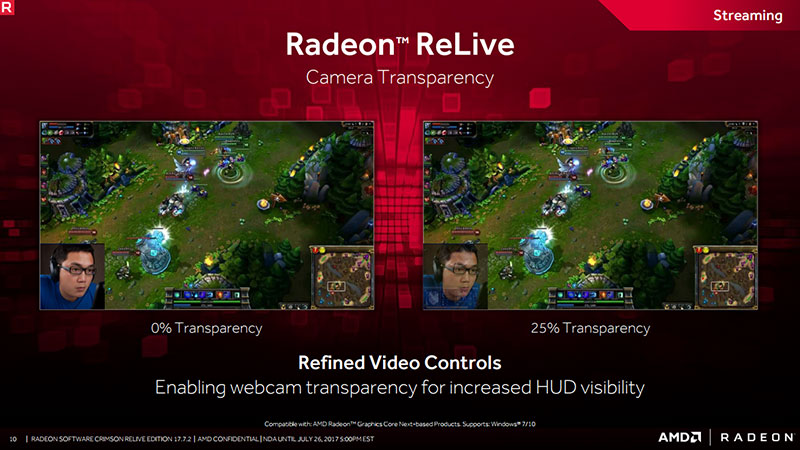 On top of that, there are a couple of under-the-hood tweaks to improve performance while streaming or recording. AMD says memory usage has been further optimized, which will help cards with smaller VRAM. It has worked to minimize the FPS overhead as well, in order to reduce the footprint of the capture software. 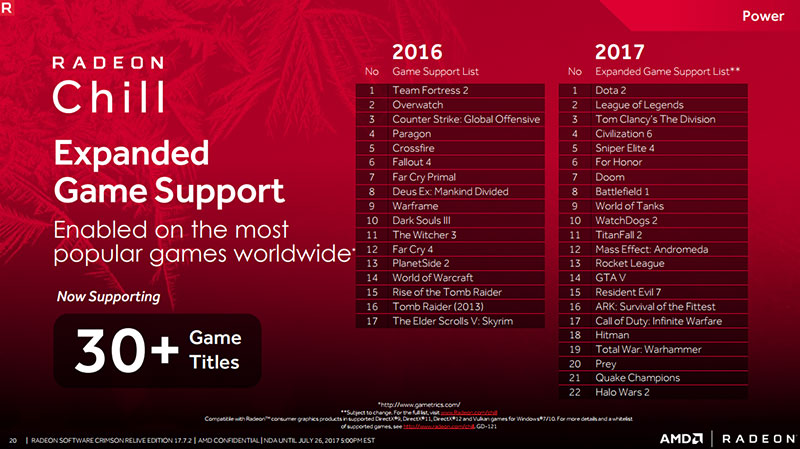 When it was first introduced late last year, AMD’s Radeon Chill came across as quite an interesting feature. It worked by dynamically regulating frame rates according to your in-game movements – if you were just standing still and holding an angle in Counter-Strike: Global Offensive, Radeon Chill would lower your FPS to save power.

Of course, there’s a minimum frame rate of 40 (you can set this higher, if you wish), so you never get a choppy, unsavory experience. But once the firefight begins, frame rates will ramp back up instantly.

However, it’s understandable that gamers will be wary of any mention of frame rate drops, so you can still turn it off on a per-game basis. Twitch reaction shooters like Counter-Strike require maximum fluidity and the highest possible frame rates, so you’ll probably want Chill off in that game.

This time, however, AMD has expanded support for Chill to cover a wider range of hardware, games, and APIs.

Radeon Chill will work with AMD’s Radeon XConnect technology, so notebooks will be able to benefit when used with a compatible dock and external GPU. There is also support for mobile graphics cards, which looks like it should help with battery life.

Furthermore, multi-GPU configurations will benefit from Chill, with AMD claiming up to a 29-percent reduction in average power draw with dual Radeon RX 580s in Overwatch.

Finally, AMD added support for low-level APIs like DirectX 12 and Vulkan, an improvement over its initial compatibility with just DirectX 9 and DirectX 11 titles. You’ll also notice that Radeon Chill controls have been moved from WattMan to Radeon Settings, which is easier to access.

WattMan functionality has been enhanced as well, with tools for memory underclocking and GPU power state controls. 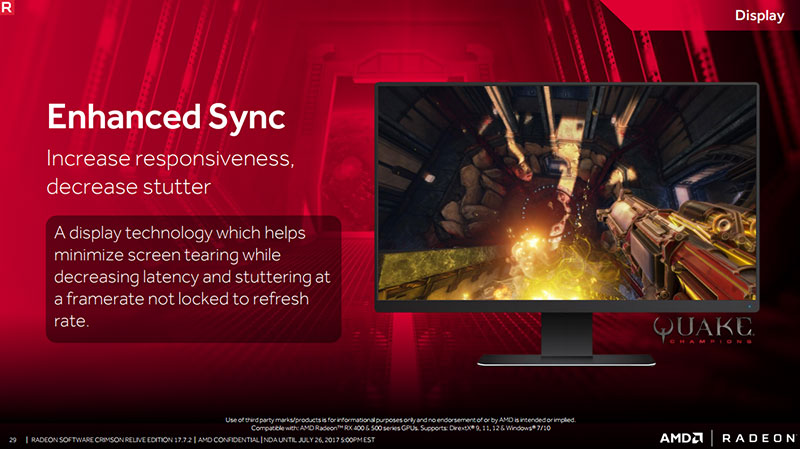 In a nutshell, Enhanced Sync allows the GPU to run as fast as it can without any frame rate cap. If this sounds the same as keeping VSync off, it’s not. Without VSync, the front and back frame buffers will flip as soon as the GPU finishes rendering a new frame, even if the monitor hasn’t finished drawing that frame on screen. This results in low latency, but it's also what introduces tearing, where portions of two or more frames are shown on screen at the same time.

However, each time the monitor prepares to draw a new frame (or when it would ordinarily grab a frame from the front buffer), Enhanced Sync tells it to display only the most recently completed frame. 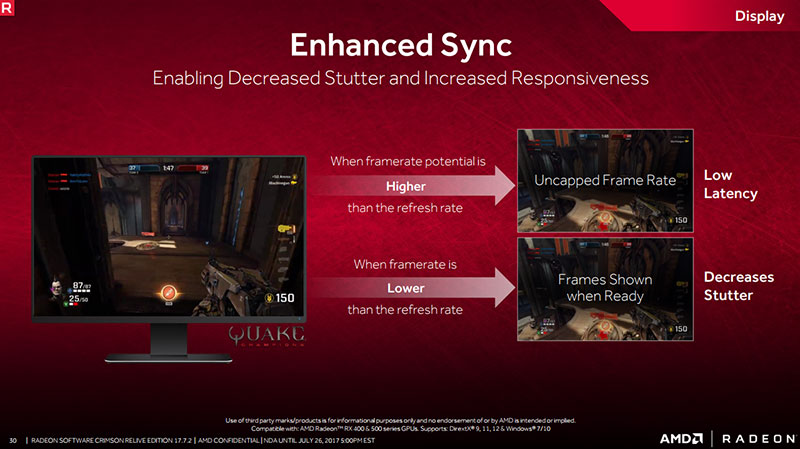 Some older frames may be dropped as a result if they are not needed, so the GPU can work as fast as it can, filling up the frame buffers without having to wait for the next refresh cycle to begin rendering a new frame.

AMD says this approach maintains fluid animations, reduces tearing, and cuts down on input lag compared to VSync, especially when frame rates exceed the refresh rate. This actually sounds quite like NVIDIA’s Fast Sync, and we wouldn't be surprised if the two approaches are similar, which is to say, some variant of triple buffering.

However, there’s still marginally higher latency, with AMD claiming an 84.7ms response time with Enhanced Sync, compared to 72.7ms with VSync off. Still, these numbers are markedly lower than keeping VSync on, so you get an overall more responsive experience, while also minimizing tearing.

When frame rates fall below the refresh rate, however, Enhanced Sync will accept a certain amount of tearing to reduce stuttering. VSync causes stuttering in the latter scenario because it introduces a new, lower frame rate cap, such as 30fps, and doesn’t allow any number between that and the maximum 60fps for a 60Hz monitor. These sudden, sharp drops in FPS results in very obvious stutter, but Enhanced Sync avoids this because it lacks a frame rate cap of any sort.

In the slide below, you can see that leaving VSync on leads to fairly large variations in frame time, or the time taken to render each frame, so gameplay is anything but smooth. However, Enhanced Sync evens out the disparity by simply displaying the frames as they are ready, leading to an overall more consistent experience. 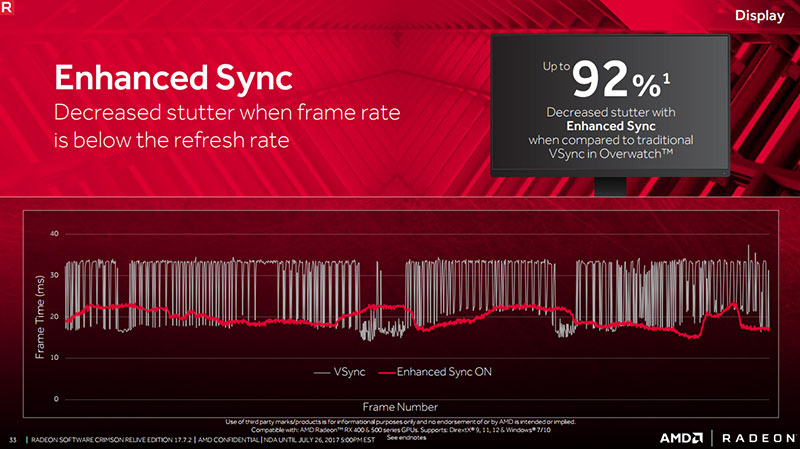 The good news is that Enhanced Sync will work with any display, so you don’t need any new hardware, other than a Radeon RX 400- or 500-series GPU. It will also complement FreeSync, by kicking into action and help reduce tearing if frame rates exceed the monitor’s refresh rate.