Ever wondered how a similarly configured AMD and Intel platform based notebook would fare? While this topic has been touched upon every once in a while, it's time to pit them together to see how both these platform providers stack up and that's the main talking point in this article. Before we jump in, we backtrack a bit to highlight the progression of the notebook scene and our segment of comparison today.

Two years ago, netbooks got consumers all hot and bothered with their ultra affordability and mobility. Mainstream notebooks weren't neglected either as consumers still lapped them up to overtake worldwide desktop PC shipments. However brisk sales of the cheaper and less functional netbooks did make OEMs and platform manufacturers to take note of new forms of consumer needs. In a bid to capture a relatively new segment of thin and light notebooks with the full performance functionality of traditional mainstream notebooks, Intel leapt in with its introduction of Consumer Ultra Low Voltage (CULV) processor based notebooks early last year.

Essentially, the CULV processors were the same Core 2 Duo processors but were thoroughly tested for much lower voltage operation, thus enabling notebook designs to cater to the lower TDP of the platform running within. This meant, thinner, lighter and swankier designs for the relatively newer CULV platform based notebooks, which also performed far better than netbooks and were almost as capable as traditional notebooks. While manufacturers have had previously offered similar ultraportable notebooks, these were extremely expensive and mostly aimed at the business segment. The CULV based notebooks were however targeted at mainstream consumers and offered much of the portability as high-end business notebooks, but at a much lower price point.

Now an interesting point here is that Intel wanted to anxiously compete in this special 'new' segment mostly because their competitor, AMD made their move first in this range of notebooks. While AMD didn't have an answer to the popular netbook segment because it wasn't concentrating its efforts to produce a chip specific to this segment, they did however improvise with their existing mobile processor line-up, tweaked them for even lower power consumption and got in to the whole marketing of providing a better experience with their thin and light notebooks than a limited netbook could offer.

When we evaluated the first iteration of AMD's thin and light notebook solution last year, the Yukon platform with its Neo single-core processor didn't seem impressive, but it did score better than an Intel based netbook by a good degree. The Congo platform with its dual-core processor however, seemed more in line as a modern ultra-thin laptop platform. Having had the opportunity to test some Congo-based AMD ultra-thin notebooks (such as the Acer Ferrari One), we did find some performance improvements but still not quite in the same playing field as Intel's CULV platform equivalents. However, AMD notebooks do have the advantage of featuring better integrated graphics thanks to them owning ATI and using an ATI integrated graphics processor (IGP).

Thus far, Intel based notebooks have managed better performance numbers for crunching productivity and content creation tasks while managing better power consumption figures. AMD's platform has an interesting proposition with better multimedia performance thanks to its integrated graphics engine, but Intel has improved theirs by a fair bit since the Montevina update came along; so is AMD still leading in this aspect? And which notebook platform has the upper hand when factoring all of these aspects including value? 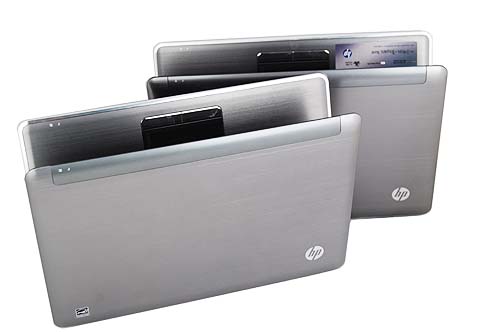 So far, we've tested various notebook models running on Intel CULV and AMD Congo platforms, but for this article we managed to obtain two almost identical notebooks for both platforms using the HP Pavilion dm3 series. We previously reviewed the Intel version that boasts of a Core 2 Duo SU7300 (1.3GHz) dual-core processor and the Intel GS45 chipset which has Intel's GMA 4500MHD integrated graphics engine (the first to fully handle 1080p Blu-ray video playback properly on an Intel mobile chipset) and is priced at about S$1599. We'll pit this against the more recently acquired AMD M780G platform based HP Pavilion dm3 notebook running a Turion Neo X2 L625 (1.6GHz) dual-core processor. Priced cheaper at S$1499, it even boasts of an ATI Mobility Radeon HD 4330 discrete graphics chip. So for a lower price point, we can tell you'll be getting better graphics capabilities, but what about better overall performance? Let's find out.