By now, surely everyone has heard of the Major All Stars Dota 2 tournament held recently at Stadium Malawati, Shah Alam. The tourney faced more than its fair share of problems on Day 1, but managed to make quite the comeback for the second and third day, bringing the whole event to a satisfactory, if not optimal, close.

Being an international tournament, the presence of big names from far away – such as Na’Vi and Team Empire – were a given. Another team from the same distant neighborhood was here too for a cut of the US$100,000 prize pool: Ninjas in Pyjamas. We managed to catch the team in between matches to find out what the Swedish team thought of Malaysia and Major All Stars. 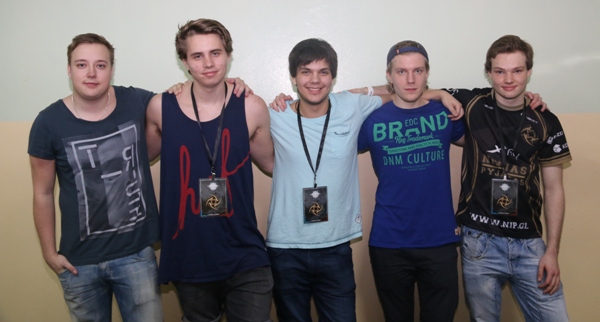 How do you find Malaysia?

Era: Extremely warm, but very warm and welcoming as well, I’d say. People are very nice and kind, they ask you like, “You’re okay?”, “Do you need any help?”, stuff like that. At least, that’s the impression I’ve got so far. Really nice people, yeah.

Anything else you like about Malaysia? You guys have said that the weather is hot…

Era: Well, it’s a bit too hot because we’re used to the Nordic weather.

Handsken: And also, it seems like religion is very important here. That’s not really how it is in Sweden.

Era: Yeah, it’s a bit different from how it works in Sweden.

How do you find the food here? Have you guys had the chance to sample the local cuisine?

Sealkid: I think it’s real nice and spicy, and I like it.

Considering that you guys are facing teams from all around the world – I mean, you guys do this all the time – is it any different this time?

Era: This time is a little bit different because we haven’t really… I mean, we’ve heard about the names that we faced and stuff like that but we haven’t really looked up on them. Teams like Rave and Invictus Gaming, of course, we’ve seen those names on some streams like Beyond the Summit from time to time, but we’ve never played against them before, so it’s a bit different. It’s not like we’re facing CIS teams or European teams. I mean, Na’Vi is a recognizable face for us, but Rave, CSW, Invasion and Redemption… Those are new teams to us, they play very differently from what we do, so yeah, we have to adapt somewhat, but it’s not that big of a deal.

Handsken: It’s just the second time we’re in Asia as a team, so we haven’t really played with any Asian teams.

Now that we’ve gone through all three days of the tournament, how do you find it? The first day was… how it was, but how did you find the second day yesterday, and today?

Handsken: I think they improved on a lot of things. We had a meeting with all the team captains and some of the organizers, and we brought up all the problems. And that really helped. I’m really impressed with how well they recovered from Day 1. They set up a meeting with all of us, asked all of our concerns and everything that they could’ve done better, and said they would fix everything they could for the next day. We were told that they didn’t sleep or anything; they just wanted to make sure to fix everything. Personally I’m really impressed with how well they did.

All things considered, if Malaysia were to have another tournament of this scale, would you guys be happy to come again? Or do you guys have reservations, considering the first day?

Era: Like if there’s any other tournaments going on at the same time, we would have like a debate on which one to go for, and stuff like that, but yeah, if the schedule isn’t packed, for sure we would come back again.

So what happened during Day 1 would not deter you guys from coming again?

Era: No! As Simon (Handsken) said, considering how well the tournament recovered, we wouldn’t even consider it being like Day 1.

Is there anything else you would like to add to this session?

Handsken: I’d like to take this opportunity to give a shout-out to “fUzi,” a former teammate back when “Sealkid,” “jonassomfan” and I were still in the Heroes of Newerth scene.