Shootout: And the best smartwatch is... The Moto 360 Sport is basically a fitness-friendly version of Motorola’s second-generation Moto 360 smartwatch with mostly the same internals, but with a different design, display, and most importantly, built-in GPS.

The Sport ditches the luxury stainless steel and Horween leather of the original Moto 360, replacing it with a rubber one-piece case and band. The strap isn’t removable so you’re stuck with whatever color you buy. Like the regular Moto 360, there’s a button at the 2 o’clock position that’s used to dim the display and access the app menu. It’s worth noting that while the 360 Sport looks more rugged than the regular Moto 360, it has the same IP67 rating, which means you can’t use it while swimming. The main watch body is quite large, with a 45mm diameter, and is also pretty chunky at 11.5mm thick. The 1.37-inch display has a 360 x 325 pixels resolution (263ppi) and uses a new type of LCD technology called AnyLight, which switches between a full color LCD display under most lighting conditions and a monochrome transflective-style display that looks similar to the E-paper display popularized by Pebble (RIP) and Kindle when it's very bright, or when the watch is idle and just displaying the time. This gives you the benefits of an always-on display so you can always see the time, without draining your battery. Unfortunately the display still has an unsightly flat tire at the bottom where the ambient light sensor is located.

The 360 Sport’s built-in GPS means you can go running without your smartphone, tracking your route and distance with Moto’s pre-installed Moto Body software, which will also track calories burned and steps taken. While running you can swipe through various screens, showing basic metrics on distance, pace and heart rate data. You can free run, or set yourself various goals to achieve.

Specs-wise the 360 Sport is what we’ve come to expect from Android Wear smartwatches, with a Qualcomm Snapdragon 400 processor with 512MB of RAM and 4GB of storage. The 300mAh battery inside it will last about a day on a full charge, but with GPS turned on, expect about three or four hours at the most. We expected more with the new AnyLight LCD technology implemented for its screen. There are two Samsung Gear S3 models: the Classic and the Frontier. The Frontier has a sportier design with a gunmetal case and markings around the bezel. It also comes with a more rugged silicone strap. The Classic is a cleaner look, with a leather strap and a brushed stainless steel case. Both models are significantly bigger than 2015's Gear S2, with a new bulky, oversized 46mm case. Like the S2, both S3 models are IP68 dust and water resistant, however Samsung does state that they’re not suitable for swimming or diving. 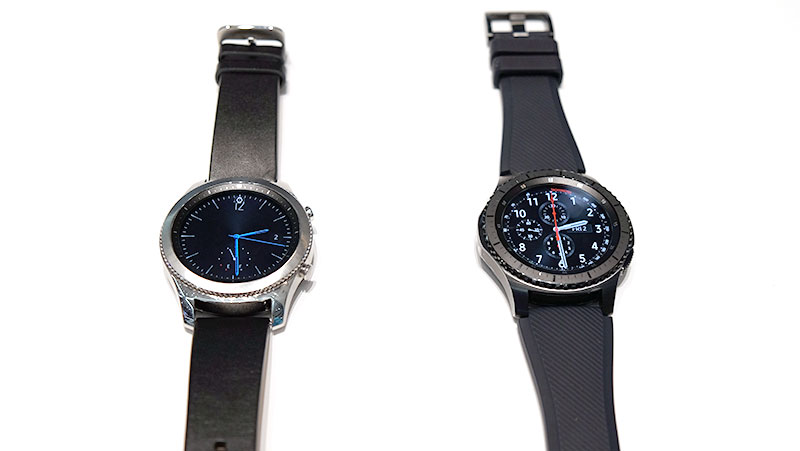 The S3 has a 1.3-inch Super AMOLED screen with a 360 x 360 pixels resolution (278ppi). The display is bright, with deep contrast and vibrant colors. Best of all, it’s now an always-on display, which means that the screen dims, but leaves a watch face visible at all times. And unlike the Moto 360’s always-on display, the S3’s always-on watchface is full color.

There are two buttons on the right side of the S3, the top one is the back button and the second is the home button. But the main way you’ll navigate menus is through the rotating bezel. The notched bezel on the Gear S3 rotates left and right, with a satisfying click when you rotate it, letting you easily scroll through its circular menus. When you get to what you want, you just tap the screen to select it. We loved this navigation system when we first saw it on the Gear S2 and it’s just as good now. It’s still the most intuitive way to control a smartwatch. 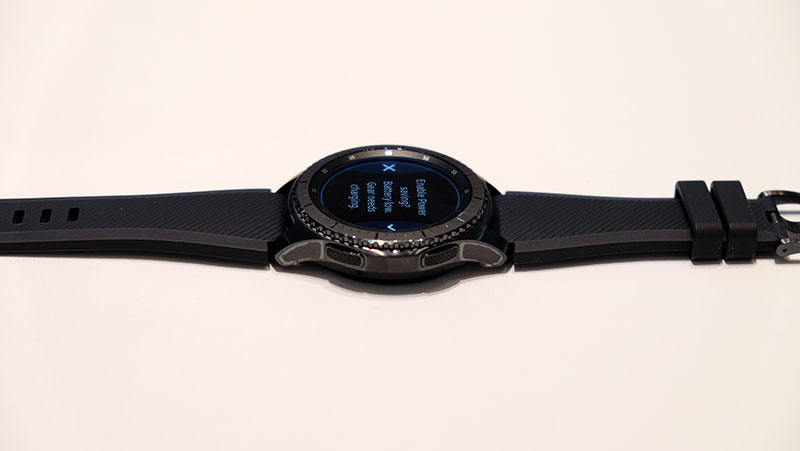 The S3 runs on Samsung’s own Tizen OS instead of Android Wear, which means its app ecosystem isn’t as robust but, for the most part, Samsung fills the gaps with its own apps. Samsung’s S Health app covers most of your exercise essentials and the Gear S3 packs a ton of sensors for tracking your workout including an altimeter, barometer, accelerometer, built-in GPS, and an optical heart rate monitor on the back.

The Gear S3 has a 380mAh battery, which gives it about a day and a half of battery life. If you have GPS on though, expect significantly less than that. 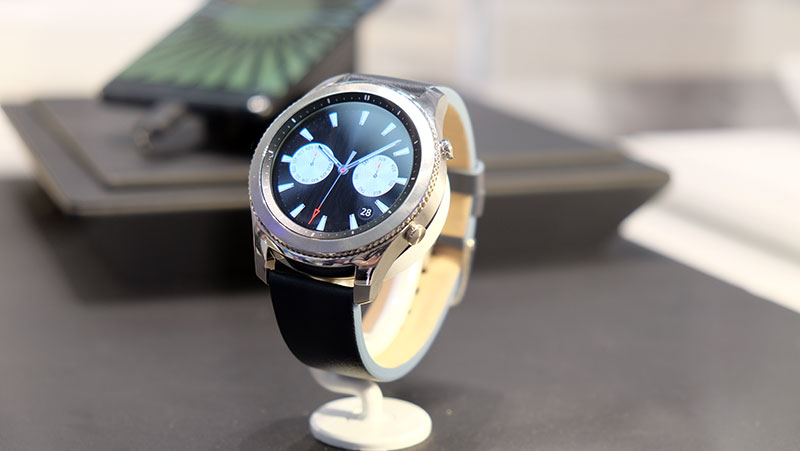