Review: The Invisible Man is a fresh and creative take on an old horror story

Review: The Invisible Man is a fresh and creative take on an old horror story

Note: This article was first published on 5 March 2020. The Invisible Man is another entry in United International Picture’s ever-expanding library of monster movies. Dracula Untold and the Mummy might not have turned out so great, but the Invisible Man proves that there’s still some life in these classic horror villains. Not only is it a great horror movie in its own right and filled to the brim with grit-your-teeth levels of suspense - it’s also got a great #metoo twist.

Get ready for some spooks Before I go on, I want to address one thing. The trailers for this movie are absolutely awful. They basically spoil everything about this movie - except for its ending. If you haven’t seen them, I’d advise you not to look them up, and just go watch the movie. Rest assured, this is a very good horror flick.

The Invisible Man follows Cecelia Kass (Elisabeth Moss), a woman who breaks free from an extremely abusive relationship with her boyfriend - Adrian Griffin (Oliver Jackson-Cohen). She then lies low at her childhood friend James’ house with his daughter, living in constant fear that Adrian will find her again. In a strange twist, her sister Emily brings her some not-so-tragic news: Adrian has been found dead in their old house, and the police think he committed suicide.

At first, this is a relief. Cecelia is finally free! Her evil ex-boyfriend is dead, and she doesn't live in constant fear anymore. She can leave the house, make friends and finally live a full life - one that he has kept her from living for years. Then, of course, strange phenomena starts occurring around the house. She feels like she’s being watched, wherever she goes. That bacon she was cooking on the stove suddenly catches fire. She wakes up at night, and a floating phone is taking pictures of her and James’ daughter Sydney.

She’s being stalked by something unseen, and no one will believe her. I mean... who would?

Who’s that behind you? No one? Are you… sure?

I have to give credit to Leigh Whannell here. After the director’s cyberpunk-y revenge thriller Upgrade, it was clear that he had a lot to offer - but this film is just on another level. He makes a lot of interesting choices which end up bolstering the film as a whole, whether it’s the invisible opening credits or the anxiety-inducing long takes. Whannell previously wrote Saw and Insidious, so his knack for crafting a good horror story shouldn’t be too surprising.

The cast is excellent as well. Fans of Mad Men and the Handmaid’s Tale know that Elisabeth Moss can pull off a fantastic performance when she has to, and she does so again here. Cecelia spends a lot of time in this film desperately trying to get other people to believe that someone is stalking and violating her - and the only possible suspect is her dead ex-boyfriend. That’s a pretty demanding role, but Moss makes it look easy.

The rest of the main cast are really great as well. Though he appears minimally here (duh), the Haunting of Hill House’s Oliver Jackson-Cohen is fantastic as Adrian Griffin - Cecelia’s depraved, controlling and possibly Invisible Man of an ex-boyfriend. You come into this movie at the tail-end of his and Cecelia’s relationship, but you’ll have no trouble believing it wasn’t a happy one.

More horror films need to be made like this 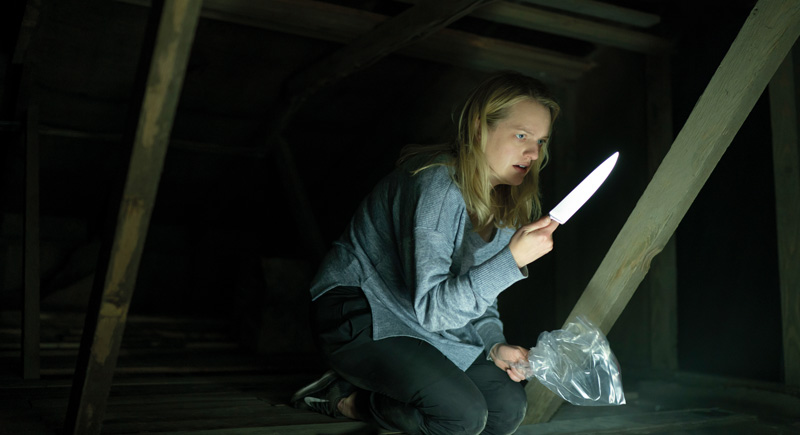 Something I really appreciated about The Invisible Man is that it took the slowly-building suspenseful route of horror movies like Hereditary and (I would argue) the Conjuring, instead of resorting to cheap jump scares every five minutes to wake the audience up. Don’t get me wrong though, this film still isn’t a slow-burn by any means. The very first scene in the Invisible Man is an extremely tense escape sequence, with Cecelia enacting a cleverly-thought out plan to get out of Adrian’s house without alerting him. The film never once lets up on that tension afterwards - but it does take a couple twists and turns to keep things unpredictable.

Cecelia is also, to my delight, a smart horror protagonist. That’s a sad thing to note in any movie, but horror fans know how rare characters like these are in the genre. Watching idiots with the intelligence of hockey pucks take turns to get slaughtered gets boring pretty quickly, after all. It warms my heart to see horror movies like Halloween (2018), Ready or Not and the Invisible Man actually have clever protagonists thinking their way out of horrifying situations instead of doing the dumbest thing they can at every turn.

What you see is what you get The Invisible Man is an absolutely thrilling horror film, though its let down by more than a few spoiler-filled trailers and a predictable twist or two. An ominous score by Benjamin Wallfisch helps set the tone almost immediately for this film in its opening credits - filling you with dread for what you haven't even seen yet.

Elisabeth Moss does a fantastic job portraying Cecelia - a survivor of abuse who refuses to give in to her fate. It’s a tricky balancing act to mix these timely themes with a spooky thriller - but The Invisible Man succeeds at it for the most part. This is a fresh take on an old horror story, and one worth seeing.