More than just a CPU upgrade 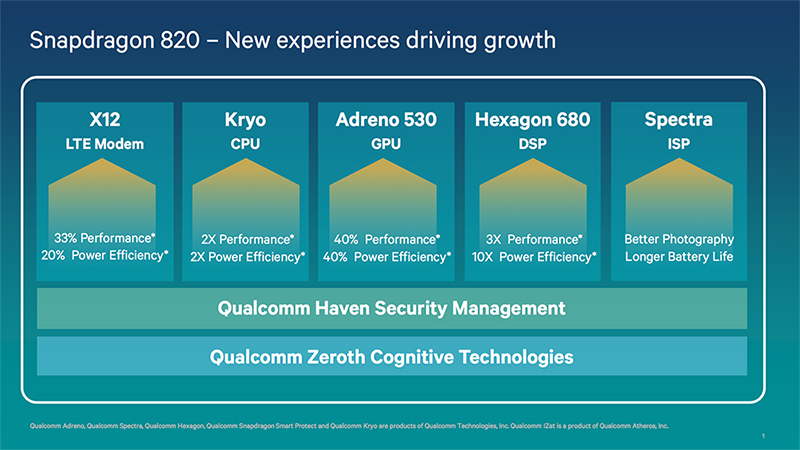 But while the CPU cores may comprise the meat of the Snapdragon 820’s performance improvements, the entire Snapdragon 820 SoC includes far more than just a swanky new custom CPU. In fact, it is intended to bring about new user experiences – better security, advanced imaging, and virtual reality to name just a few – by taking advantage of heterogeneous compute capabilities.

In a word, Qualcomm’s latest SoC features a brand new Adreno 530 GPU, a Hexagon 680 DSP for advanced input processing, a Spectra image signal processor (ISP), and a speedy X12 LTE modem, all of which enable important new capabilities and applications in the upcoming generation of smartphones.

Several of these new capabilities are only possible because of Zeroth, a software and hardware architecture designed to offer high-performance on-device cognitive capabilities by tapping directly into the Snapdragon chip’s heterogeneous compute capabilities. Zeroth also comprises machine learning algorithms and things like low-power sensor processing.

The applications of the Zeroth cognitive computing platform are vast and wide-ranging. It can lead to things like smarter virtual assistants, which takes a lot more than just a more powerful processor. Cognitive technologies are all about context, patterns, and the ability to tease meaning from them and learn about them. Many of these algorithms are actually inspired by the human brain, and could potentially exceed what our gray matter is capable of.

Taken to its logical conclusion, cognitive technologies like machine learning, computer vision, always-on sensing and intelligent connectivity will essentially expand our abilities by being able to sense and respond to the environment and various cues. Another key benefit is better privacy and security. Because processing can be done locally on the device, data is a lot less vulnerable as there’s no need to go through a third-party server. When mature, these technologies could also use data gathered from our daily routines to make our lives easier by personalizing our mobile experiences with intuitive predictions and other help. Given the highly sensitive nature of user data of this sort, the added security of on-device computing is even more appealing.

While we’re not quite at that stage yet, Qualcomm’s Zeroth platform is part of the first wave of processors to support cognitive computing, and the Snapdragon 820 is an integral part of this push. As a sign of things to come, Qualcomm has also announced something called Snapdragon Smart Protect, a malware behavior analysis feature that allows mobile devices to respond more effectively to incursions and adapt to a burgeoning mobile threat landscape. In a nutshell, Smart Protect can fight malware in real-time, thus addressing a key weakness in many anti-virus and anti-malware applications today – their reliance on databases of known threats.

There is naturally a delay between when a threat emerges, when it is detected, and when a solution is finally released. Phones are vulnerable to brand new threats, but Smart Protect can effectively sniff out abnormal or suspicious behavior in real-time. 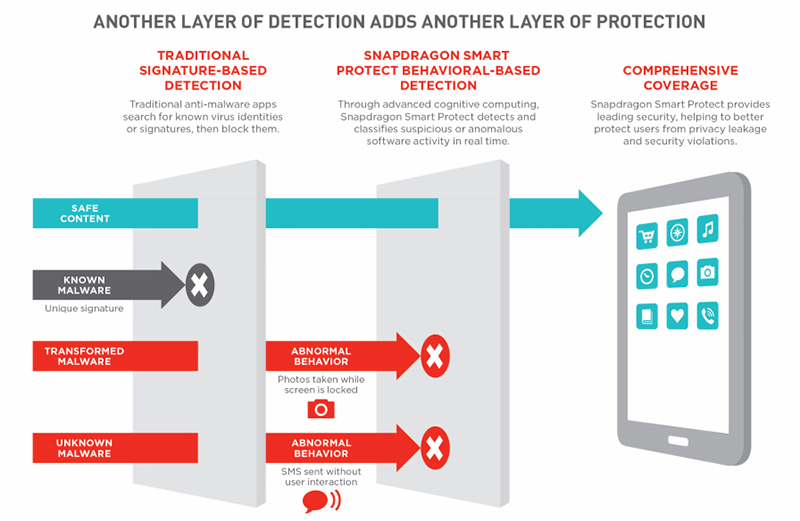 Another example is Qualcomm’s Scene Detect technology, which applies Zeroth to the field of computer vision and image recognition. By taking advantage of the heterogeneous computing architecture on the Snapdragon 820, Scene Detect can automatically analyze and classify images in the fraction of a second. Neural networks are employed for things like pattern matching, scene detection, and object recognition. Eventually, we could even see use in applications like automatic photo tagging and sorting or even augmented reality.

Smart Protect and Scene Detect are just the tip of the iceberg though. The onus is on developers to get on board with the Zeroth platform to create applications that can exploit the heterogeneous computing capabilities of the Snapdragon 820. Till then, a lot of the possibilities we talked about (however exciting they may be) are just that, possibilities.