The sum of the parts 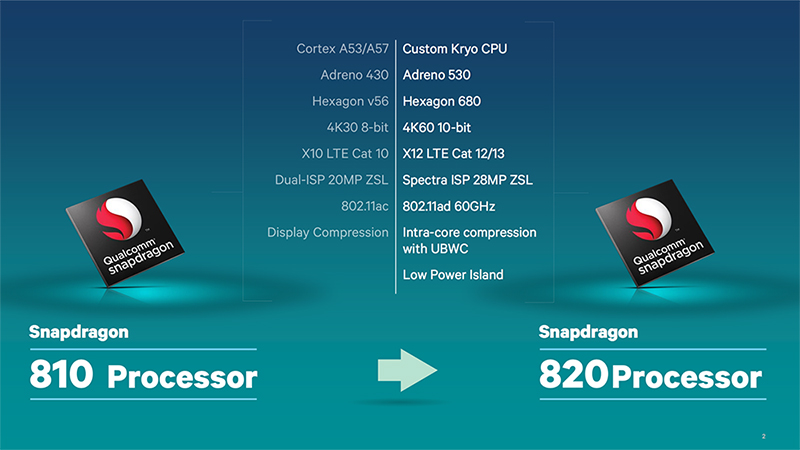 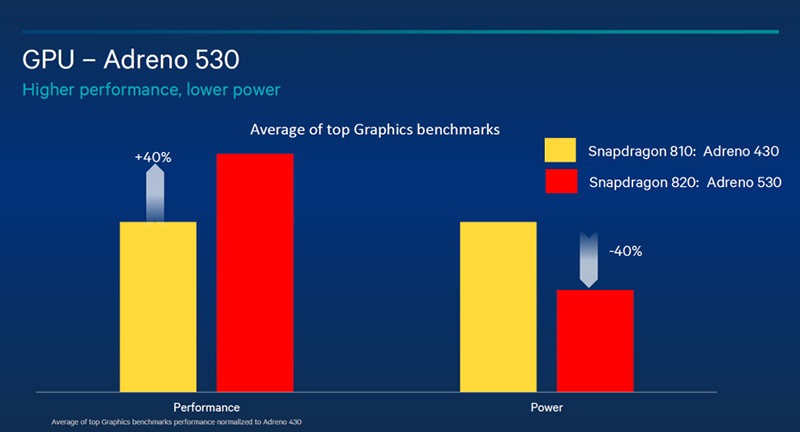 As expected, Qualcomm has been sparse on the details concerning the Adreno 530 GPU found in the Snapdragon 820 SoC. This is Qualcomm’s highest performing GPU, designed to deliver up to 40 percent more performance compared to the Adreno 430 found on the Snapdragon 810. Qualcomm is also claiming a commensurate reduction in power consumption compared to the previous generation chip, which should translate into the ability to run more demanding games for longer.

Other details that we do have is the fact that the GPU operates at a frequency range of 133MHz to 634MHz. Furthermore, it is reportedly not a complete redesign over the Adreno 430, and instead features small architectural tweaks throughout for incremental improvements. For instance, it now makes better use of data compression when handling and moving data around in order to lower power consumption. Video processing is also another area where Qualcomm demonstrated marked increases in compute performance, up to 2.5x better than the Adreno 400 series GPU.

Qualcomm also highlighted that the Adreno 530 GPU will support Vulkan 1.0, the recently-released cross-platform, open-source API. Vulkan gives game and application developers explicit control over the GPU’s resources and allows them to leverage multi-threaded architectures more effectively. Support for Vulkan will thus position Snapdragon 820-equipped phones to enjoy the improved performance and experience offered by applications that use Vulkan. 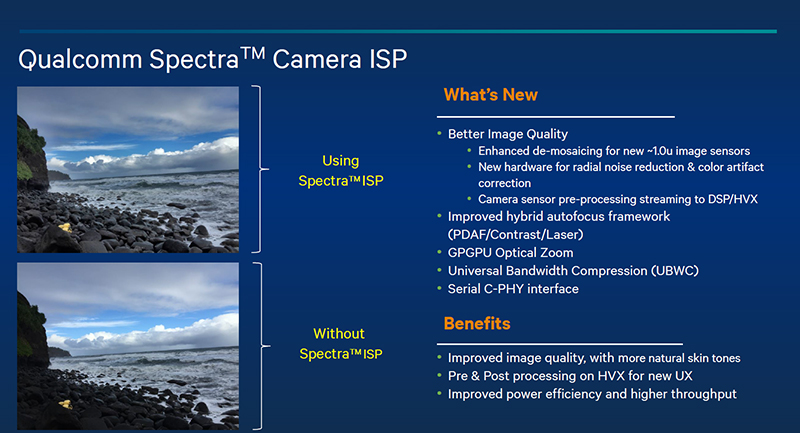 Imaging prowess is one of the most important aspects of any phone, and the Spectra ISP supports three simultaneous cameras (one front, two rear) at up to 25-megapixels and at 30fps with no shutter lag. Qualcomm has again been sparse on the details, but we do know that Spectra features 14-bit dual ISPs that reportedly offer more natural skin tones while photo taking.

It also utilizes a flexible hybrid autofocus framework and multi-sensor fusion algorithms for the next generation of computational photography – a term for the processing techniques that use digital computation in digital image capture. There is also support for technologies like dynamic Local Tone Mapping that remaps tones upon each other to simulate the appearance of high dynamic range (HDR) images and boost detail in scenes with a wide dynamic range.

Other benefits include better power efficiency, improved noise reduction, and higher throughput thanks to advanced compression techniques and the higher-bandwidth C-PHY serial interface that connects the camera module to the application processor. 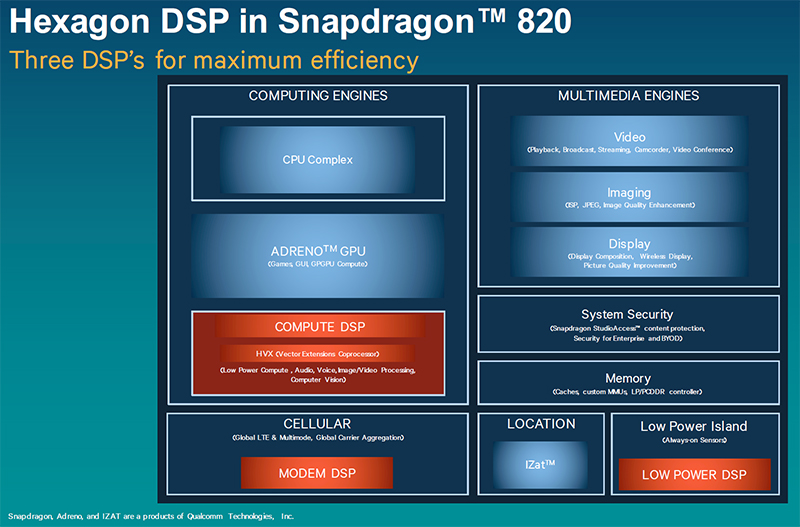 The Hexagon 680 DSP handles applications like voice and audio processing, in addition to other input processing. As a specialized processor, it can do these tasks much faster and more efficiently than a conventional CPU, which is why the Snapdragon processor offloads specific tasks to the DSP to save power.

The new DSP actually comprises three parts – one for processing audio, voice, images and other low-power compute tasks, a “low-power island” for specially designated sensors, and a third modem DSP that deals with global LTE and tasks like carrier aggregation. In fact, this is the first time Qualcomm has gone with a completely separate DSP for sensor processing in the form of the “lower power island”, which can potentially improve battery life of devices during always-on scenarios, for instance when it is being used as a step tracker.

In addition, Qualcomm is citing extra horsepower thanks to something called Hexagon Vector eXtensions, or HVX for short. HVX supports advanced imaging and computer vision when paired with the Qualcomm Spectra camera ISP. So if you wanted to snap a picture in a poorly-lit room, the Snapdragon 820 would use both the ISP and DSP to brighten areas of both photos and videos on-the-fly that would otherwise be too dark. Working in tandem with the ISP, the Hexagon 680 DSP enables the Snapdragon 820 to perform this adaptive brightening several times more quickly and still use less power.

The Hexagon 680 DSP actually works much like a multi-core CPU, with a multi-thread programmable compute engine that allows parallel execution of both audio and imaging tasks. Overall, this should further increase battery life and performance because processes are more efficient and can be completely more quickly.

We’ve already covered the new modem in greater detail in a separate article, and you can head there to find out more. But just to recap, there are a couple of major upgrades that really stand out – 4x4 MIMO and support for 256-QAM (quadrature amplitude modulation) for download. We’d go into the details, but all you really need to know is that they both enable more data to be transmitted at any one time, effectively increasing your potential throughput.

Of course, getting a Snapdragon 820-equipped phone will not magically increase your mobile download speeds. A lot of it depends on things like carrier infrastructure and support for Qualcomm’s new technologies, and we’ve to also bear in mind that the global average for LTE download speeds is just 13.5Mbps.

Qualcomm may have raced even further ahead with its X16 Gigabit-class modem, but we’ll have to content ourselves with talking about mere possibilities for now.