Level Up KL 2016: The quest to level up South East Asia’s gaming industry

Level Up KL 2016: The quest to level up South East Asia’s gaming industry It has been a very thought-provoking day at the Level Up KL 2016 game developers conference, where esteemed experts from the video game industry gathered together under one roof to share their knowledge and passion about everything pertaining to the development of video games.

Level Up KL 2016 kicked off with a keynote by Alexander Fernandez, the Chief Executive Officer of Streamline Studios. For the uninitiated, Streamline Studios has played a significant role in the development of several AAA games across various platforms, such as Bioshock Infinite, Street Fighter V, and Final Fantasy XV. Fernandez gave an insightful talk about what makes a video game development studio successful, which, contrary to what you might be thinking, doesn’t just involve coming up with good games – it also involves building a company.

“I have met so many people over the past 15 years who have basically came up to me and said ‘Hey check out my game’, but what I’d rather see is this person saying ‘Hey check out my studio that’s making a lot of games because I’m building a company that’s built to last,’” said Fernandez.

“The reality is 65-percent of the people working in the games industry right now have been in it for less than five years. Why is that? Because it’s brutal and unforgiving. But the ones that last were the ones that realized that they were building a studio, not just a game,” Fernandez pointed out. Building a studio is more than just about hiring a team of developers and designers and leaving them to their own devices – you’ll also need to nurture them along the way to ensure that they always performing at their best.

“You have got to get the best talents.” Fernandez said during his keynote.

“You’re going to sit down and develop and invest in your people. Nothing will pay more than dividends than you investing in your people. The more you show them, the more they can do, and the better off you are in terms of being able to execute a project. More importantly, it shows to your potential partners that you’re serious about the growth of your company.” 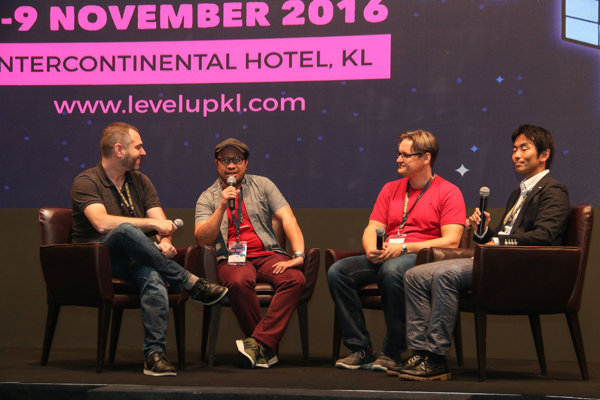 Level Up KL 2016 was not short of panel discussions either.

Sheetal kicked off the discussion by posing a question about the ‘value’ of an IP, and how video game developers can leverage on it.

Hazmer responded by talking about the successes of Final Fantasy and how iconic the franchise is, but admitted that it has begun to lose its luster in recent years.

“Final Fantasy has sold more than 150 million copies worldwide. And it is one of the highest selling franchises around. However, we admit that Final Fantasy has been losing relevance as of recent years,” said Hazmer.

In an attempt to overcome this growing problem, Hazmer restructured his development team to make it more cohesive, and even made the development of Final Fantasy XV more open and transparent to the fans.

“We released the demo of Final Fantasy XV one year ago, which is something unusual for the Final Fantasy IP. Not only that, we actually engaged a lot of external parties like Florence and the Machine as well as Afrojack to compose the music for Final Fantasy. This was unthinkable many years ago, but we want to bring more relevance to the IP, and we have been working hard for the past three years to do that,” he said.

“And that’s how you increase the value of the IP,” Hazmer added. Then we have the second panel discussion of the day, titled “How Accelerators Grow Game Studios”. Kadri Ugand, Co-founder of GameFounders; Jana Palm, General Manager of Stugan; and Gerald Tock, Chief Executive Officer of Inzen Studio contributed to the discussion, with Muhundhan Kamarapullai, the Head of Startup & Entrepreneurship of the Malaysia Digital Economy Corporation (MDEC) acting as moderator.

The discussion began with a brief introduction to accelerators.

“For me, an accelerator is basically a program that helps connect game studios with mentors,” said Ugand.

“It also provides funding to studios so that they will only need a short period of time to figure out if their product flies or not,” she added.

Wondering if you’re eligible to participate in an accelerator program? Both Kadri and Palm have shared what they’re looking for in potential candidates.

“If you want to be a part of Stugan, you’ll need to send us an application video and a 90-second-long pitch. We also want to see your team and the experience that they have, as well as how unique and creative your game is. You don’t need to have a company, but your game needs to be more than just an idea,” said Palm.

Kadri, on the other hand, has a slightly different set of expectations.

“We have three criteria: Team, team, and team,” she said.

“First of all, we’ll look at the team. It’s important that every member has a different skill set. The second thing about the team which we’ll look into is the games that they have built so far, so that we can know whether their definition of a good quality game aligns with our expectations. The third thing that we’ll look at is the vision of the team. We’ll ask very simple questions, like how will they launch the game, how much do you think it’s going to make, and what are you going to do next? What is your plan?” mentioned Kadri. Do bear in mind that these were just snippets of the talks that we attended during the first day of Level UP KL 2016. If we were to chronicle everything that been said right down to the last word, this feature would probably have the length – and readability – of a thesis. So we’ll keep things short and sweet.

We’ll be heading back to the conference halls of Level Up KL 2016 tomorrow. Do stay tuned for our coverage of day two!