Level Up KL 2016: Of failure and Final Fantasy XV

Level Up KL 2016: Of failure and Final Fantasy XV 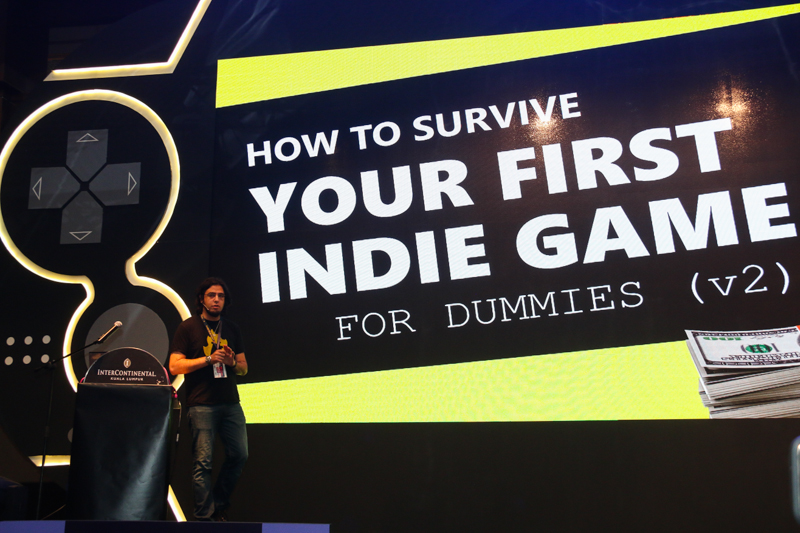 If you missed our coverage of the first day of Level Up KL 2016, you can click here to bring yourself up to speed with everything that happened.

Without further ado, let’s dive into the details.

Today’s program kicked off with a keynote by Rami Ismail, the Business and Development Guy at the Dutch independent game studio, Vlambeer. If the name sounds unfamiliar to you, perhaps you would be more acquainted with their work, which includes LUFTRAUSERS and Ridiculous Fishing.

Ismail’s presentation was titled 'How to Survive your First Indie Game', and he started it on a rather grim note.

As demoralizing as that sounds, that unfortunately is the case. You might argue that you’ve heard about many indie studios making it big with their work, but that’s the problem – you only hear about the success stories, and not the failures.

But Ismail did stressed that it doesn’t mean that you shouldn’t try.

“It just means that you truly, deeply understand that this industry is really hard, and that your chances are really slim. You really need to come to terms with the fact it very likely wouldn’t work out.”

If you’re feeling deterred already, don’t be. Ismail mentioned that we shouldn’t be too scared about failing, but instead learn how to embrace it.

“The thing is, all of us make mistakes. All of us have made mistakes before. The problem isn’t failing – the problem is the ability to get yourself back up and continue.” “I want you to prepare for failure more than anything else, so that if things go wrong – which they will – you’ll be ready for it. Build a community around your work. Find fans who love your art style. Find people who love your design. Build a space around you, whether it’s a Twitter community or a forum on Steam – find people who like what you do, so that even when you fail, you can reach out to them in the future.”

Ismail then highlighted the various possibilities why certain video games (and the development studio behind them) fail to succeed. It could be that their budget is too small, the size of the team is too big, the game is too ambitious, the design of the game is not up to par, or that the art style of the game is incoherent. Then came the turn of Wan Hazmer, Lead Game Designer of Final Fantasy XV, to take the stage after Ismail’s hard-hitting speech.

Hazmer elaborated on how Square Enix was trying to reinvigorate the Final Fantasy franchise, which, according to him, has “lost its resonance and relevance in the past years”.

If you’ve read yesterday’s coverage of Level Up KL 2016, you would notice that Hazmer briefly spoke about this during a panel discussion that he was involved. Today, he elaborated on why this is the case.

“Why are we losing this relevance? Why is Final Fantasy losing its meaning in the society of modern gamers?” he asked.

According to him, it was because of something called the “Final Fantasy disease.”

What exactly is a ‘Final Fantasy disease’, you might be asking.

For starters, Hazmer mentioned that one of its symptoms is “not having the ability to think outside of Final Fantasy.”

Diehard fans of the Final Fantasy franchise are most susceptible to catching this disease.

As an example, if your immediate reaction to Final Fantasy XV being set in an open-world was to raise your fist in the air and swear like a pirate – you have unfortunately caught the ‘Final Fantasy disease.’

Simply put, the ‘Final Fantasy disease’ is the inability to accept changes that have been made to the core gameplay mechanics of the franchise.

“It’s all about clinging to nostalgia. Fans want us to create the feelings of old, but yet they also want us to evolve. It’s a very complicated matter.” said Hazmer.

It’s not just the fans who are prone to contracting this disease – the developers of Final Fantasy aren’t spared either.

“Our production team members also have the disease, and it is a very dangerous. For example, when we wanted to turn Final Fantasy to an action battle-based game, they would say ‘No, Final Fantasy has always been turn-based, do not change it.’”

“Final Fantasy is always trying to evolve, and we need our team members to understand that,” added Hazmer.

According to Hazmer, in attempt to cure this disease, Hajime Tabata the Director of Final Fantasy XV, assembled a team of developers and came up with an elaborate three-part solution. The first, was to realize that the biggest challenge that they faced was themselves, hence the decision to restructure the entire development team.

One of the steps involved is creating a flat hierarchy.

“We made sure that there’s no complicated boss-slave relationship. Everyone works together,” said Hazmer.

Then there was the act of dividing the entire development team, and assigning them to work on a specific feature of Final Fantasy XV.

“I’m the lead game designer for the ‘culture’ team, which takes care of towns and settlements. So all the programmers, game designers, 3D modelers, 3D animators and artists that are related to towns are all in my team.”

“There’s also a battle team, and a buddy AI team. We also have a team to take care of Noctis running down a hill and walking up a hill. We have many teams based on specific features.” The second part of the solution was to become more open and transparent with the development process of Final Fantasy XV. “We have to tell our fans that we are listening to them. We released Episode Duscae one and a half years before the game is out, we opened a forum on our website for fans to provide their feedback, we also uploaded constant progress reports on YouTube,” said Hazmer. The final part of the solution was to welcome collaboration with external parties like Florence + the Machine, Afrojack, and Epic Meal Time, as well as with commercial brands like Audi and Coleman.

“Afrojack is a very big fan of Final Fantasy. He actually composed a song for us out of goodwill. We created a trailer based on his music, and voilà – he shares the video on his own YouTube channel, Final Fantasy XV gets exposed to music fans as well.” Of course, there were several other sessions that we attended earlier today, and they were each as inspiring as the other. But regrettably, sharing everything we have learnt would simply be too time consuming.

Perhaps this would indirectly encourage you to register for the next iteration of Level Up KL, which, if all goes according to plan, will be returning for the third time next year. It honestly doesn’t matter if you’re a video game developer seeking sagely advice, or are just eager to learn more about the latest trends in the video game industry – Level Up KL is undoubtedly the best platform for you to do so.