Before His Dark Materials even made its debut, I was more excited for its second season than its first. The second of Philip Pullman’s series of novels is finally getting adapted in live-action form (the first did get a mediocre movie, after all), and we’re finally past all the world-building and lore-spewing of the first season. That can only mean good things for the show, moving forward.

The first season of this BBC/HBO co-production ended with the reckless Lord Asriel cracking open his world, revealing the existence of other dimensions beyond theirs. Suddenly, the fantasy world of His Dark Materials - one where every human is partnered with an animal-like manifestation of their soul - is just one of many. Other worlds exist, including one just like ours, a shining beacon of technological achievement and countless bad decisions.

It only took ten episodes, but all the main players have finally realised their very small place in a very large multiverse. We’ve seen the first five episodes of Season 2, and let me tell you: you ain’t seen nothing yet.

On the run from everyone imaginable 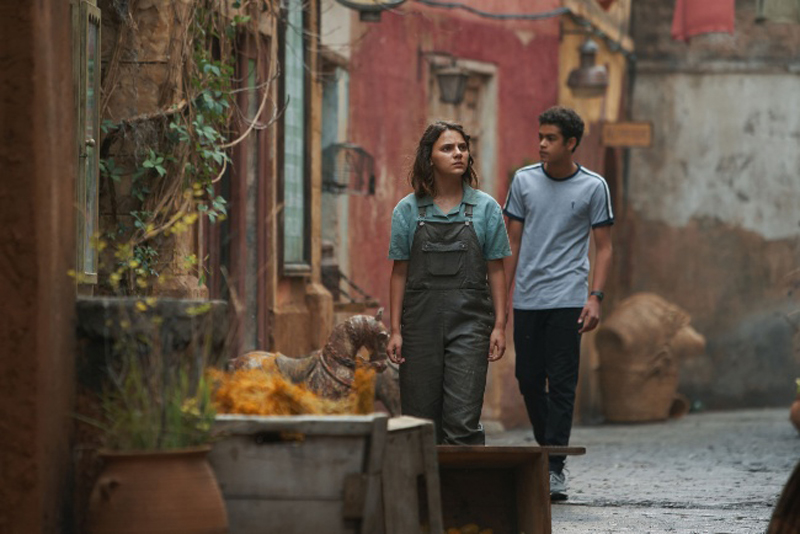 Series protagonist Lyra Belacqua begins this season in a pretty lonely place. Her father, Lord Asriel, killed her best friend to open a door to another world. On the run from the Magisterium and her mother, Marisa Coulter, she chased after her father only to end up in a world entirely foreign to her. No allies to be found either, besides her daemon Pan. It’s a depressing place to begin the season, but then again, she isn’t the only one on the run.

Will Parry came from a world much like ours, but ended up having to kill a man out of self-defence sent by people from Lyra’s world. A fugitive from the law, he stumbled onto a portal to another world, and somehow ends up in the same place Lyra finds herself now. When the two meet, they don’t get along immediately - despite Will’s best efforts. Lyra has just lost her best friend, after all. She’s not looking for another.

It becomes clear fairly quickly however, that Will and Lyra’s relationship is central to the story His Dark Materials is trying to tell. Will has a big part to play in saving the universe, and Lyra has so much more to learn about ‘dust’, a mysterious substance that becomes a lot less mysterious this season. Watching the two slowly and cautiously warm up to each other is a treat, considering that we're finally seeing them meet. It’s been a long time coming, and actors Dafne Keen (Lyra) and Amir Wilson (Will) are more than talented enough to do their journey justice. Lyra and Will aren’t the only ones with problems, however. Aeronaut Lee Scoresby (Lin-Manuel Miranda) was tasked with protecting Lyra, but lost her to an entirely different dimension. The two don’t cross paths again (at least, in the first five episodes I’ve seen), but that doesn’t mean Scoresby lounges around doing nothing for the rest of this season.

He sets out on a whole new adventure to find Lyra that leads him into run-ins with the magisterium and more than one gunfight, before finally coming across John Parry - Will’s father. The brilliant Andrew Scott plays John, a man who’s escaped his own world to become a shaman in Scoresby’s. As someone who adores Hamilton and Fleabag in equal measure, watching Scott and Miranda share so much screen time together does not disappoint. Phoebe Waller-Bridge even plays John’s daemon, bringing a mini-Fleabag reunion into the mix.

While James McAvoy’s Asriel seems to have disappeared into the void this season, we do get more of Marisa Coulter (Ruth Wilson) - who continues to be a villain you love to hate. There are no lengths she wouldn’t go to to find her daughter, which puts her horrific efforts in a strangely sympathetic place. The Magisterium continues to fumble over the existence of other worlds, and the religious themes here are thinly veiled at best - as they should be. Carlo Boreal (Ariyon Bakare) continues to flit between Lyra’s world and Will’s, acting as Coulter’s love-struck right hand man.

It seems like this season has no shortage of villains; only a shortage of allies for Lyra and Will. The few friends they have are scattered across worlds they can’t return to, and the new friends they make this season aren’t exactly reliable. At least Lyra’s daemon doesn’t go anywhere - a constantly-morphing creature that comes to life with some truly impressive CG work. Pan morphs into an adorable red panda sometimes, and it’s so lifelike sometimes that I wonder just how much money HBO is pumping into this show. His Dark Materials is better this season. Though its colourful cast of characters are barely together, their storylines are branching out and intersecting in all sorts of interesting ways. Lyra and Will’s almost effortless connection makes them a duo that’s hard to root against, which lends this season a lot more heart than the last. The story feels larger in scope now, as it's no longer rooted in one place. Scenes can bounce from Lyra’s home of Oxford to the modern world, to the barren ghost city of Cittàgazze in a matter of minutes.

Despite how much more interesting this season has been to watch, it admittedly does start slow. It reminds me a lot of Game of Thrones’ later seasons - with so many characters doing so many different things, you’re bound to feel attached to one journey more than the others. With His Dark Materials, I found myself glued to the screen whenever Lyra and Will explored the mysteries of Cittàgazze, or Scoresby and John talked about the latter’s past life. And then I would grow bored whenever Father MacPhail (Will Keen) hustled about the Magisterium, endlessly toiling over the same problems episode after episode.

Season 2 continues to bring the show's locations and creatures to dazzling life with some really impressive production quality. CG work is still astounding, and the show’s cinematography brings places like Cittàgazze to breathtaking life. As characters cross between dimensions, the tone might often veer into sci-fi territory more than fantasy, but everything still feels in keeping with the tone it’s established. On one hand, you have talking armoured polar bears fighting each other for power. On the other, you have scientists studying dark matter in a lab. It’s His Dark Materials, man. Anything can happen! His Dark Materials is done playing around this season. The walls are closing in around Lyra and Will, and they can only hope that the forces of the Magisterium don’t find their new home in Cittàgazze. The stakes are higher than ever before too, as the Subtle Knife - a tool used to open doors into other dimensions - enters the fray. If you enjoyed Season 1, rest assured that Lyra and Will’s multiversal adventure only gets better from there.

His Dark Materials will premiere on November 17 on HBO.