When Samsung launched the GALAXY S4 last year, we found many of its software features to be innovative, but ultimately gimmicky and unnecessary for the majority of people. Samsung seems to recognize that many felt the same way, and for the S5, has re-focused attention on functionality and features that people actually use.

“With the GALAXY S5, Samsung is going back to basics to focus on delivering the capabilities that matter most to our consumers,” said J.K. Shin, President and Head of IT & Mobile Communications Division at Samsung. “Consumers are looking for mobile tools that inspire and support them as they improve their everyday lives. The GALAXY S5 represents an iconic design with essential and useful features to focus on delivering the ultimate smartphone on the market today through people inspired innovation.

The Samsung product manager we spoke to highlighted five key areas that Samsung has targeted with the S5:

By the way, if you were one of the people that did find the S4's features useful, you'll be happy to know that everything the S4 did, from Air Gestures to Smart Scroll, the S5 can do as well.

The GALAXY S5 will be available in 150 countries on 11th April. Malaysia has yet to be confirmed as one of them, but it seems likely. Before we start, here's a quick look at how the S5 stacks up against last year's S4:

Well... it's slightly bigger. At 5.1-inches, the GALAXY S5 gains an inch on last year's model. It's also 0.2mm thicker (not that you can tell) and 15g heavier than the S4 at 145g. Design-wise, other than being a bit taller, it looks much the same as last year's S4 with rounded corners and 'brushed' edges. One nice design improvement is that the S5 is IP67 rated, which gives it fairly robust protection against dust and water resistant - the trade-off is that the Micro-USB port is now covered by a sealed cover. 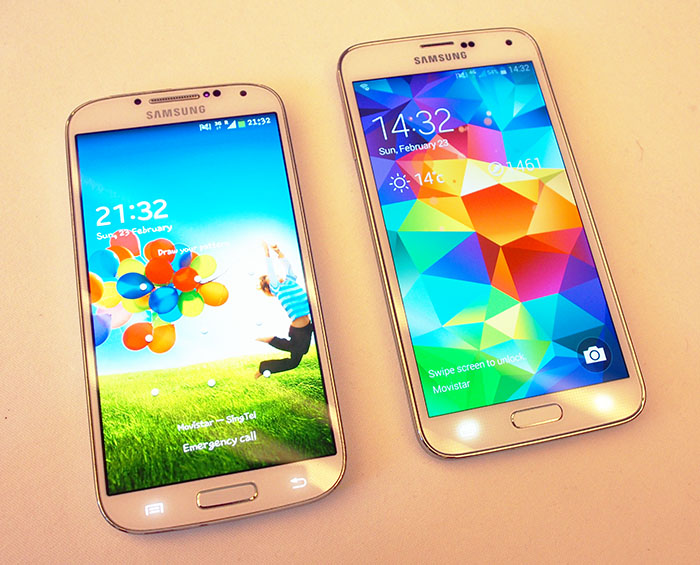 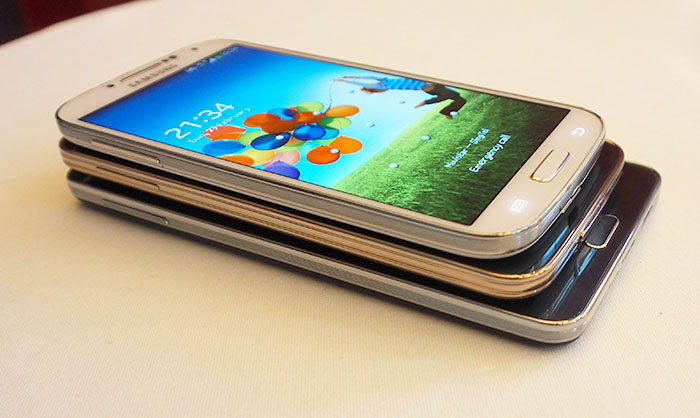 Those hoping for a radical, bezel-less, premium metal build will be disappointed, as unfortunately, Samsung hasn't changed anything here, and the S5 remains unapologetically 'polycarbonate' - although at least, Samsung has opted to ditch the glossy plastic for a dimpled semi-matte plastic finish - it's still plastic, but it feels nicer in hand and provides a bit more grip as well. 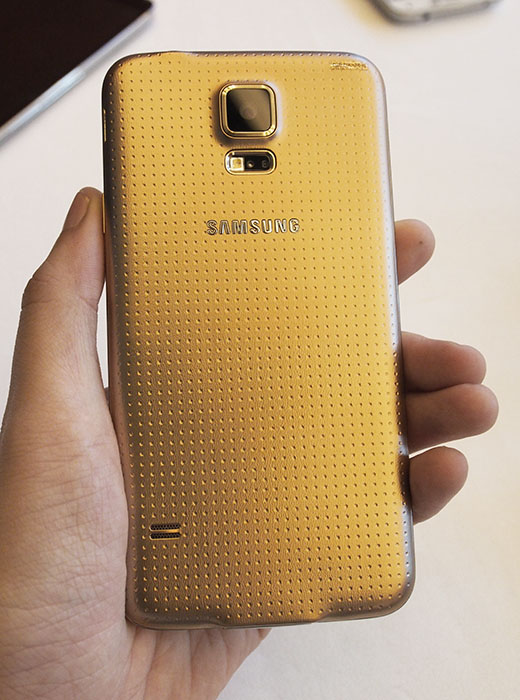 The S5 will be available in four colors at launch: Charcoal Black, Shimmery White, Electric Blue, and what seems to be everyone's color-du-jour right now, Copper Gold. The gold model has matching gold edges, while the other three have silver edges. The front of the gold, black and blue models is black, while the front of the white model is white. 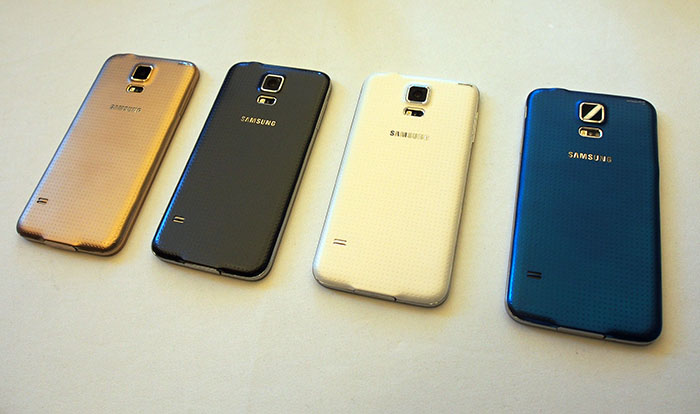 While the screen size has grown bigger, the screen resolution hasn't, and the S5 is fitted with a Full HD 1920 x 1080 pixel resolution Super AMOLED display - which actually gives it a slightly lower 432 ppi than its predecessor's 441 ppi. The difference in clarity is indistinguishable in person, but you never like to see a spec go down.

The S5 will be powered by Qualcomm's new 2.5GHz Snapdragon 805 processor and 2GB RAM. It will be available in both 16GB and 32GB storage options and will come with Android 4.4 KitKat pre-installed. 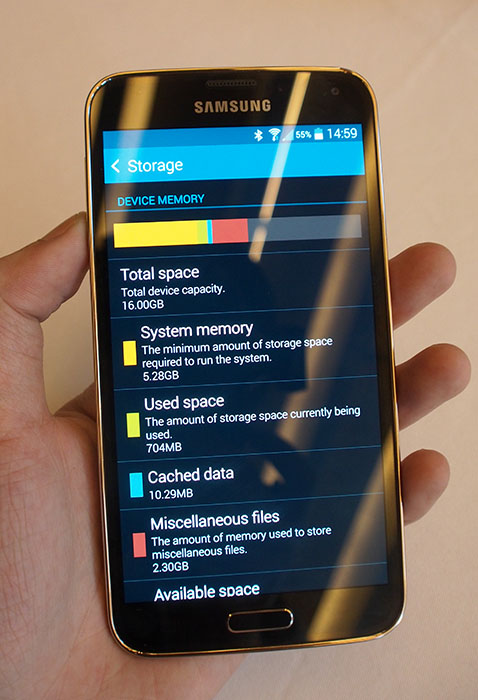 The Samsung product manager we spoke to told us that Samsung wants the S5 to be the best camera phone in the world. No small boast considering the competition out there. To help it in its task, the S5 is armed with a new and improved 16MP rear shooter with an f/2.2 aperture lens, with what Samsung tells us is the fastest auto focus ever seen on a camera phone, thanks to phase detection technology, at up to 0.3 seconds. The front camera is a much less impressive 2.0MP, which we suspect is the same front camera as on the S4.

In our brief testing, the rear camera did focus very quickly, but a few times it would focus on something in the distance rather than what we put right in front of it. Nevertheless, even in quite poor lighting, the auto focus speed was indeed impressive.

The S5's camera is also the first camera phone to boast real-time HDR settings, which will show you exactly what your picture will look like before you take it. This feature worked well and allowed us to take a picture of a bright room without losing any details in the shadows or blowing out highlights. 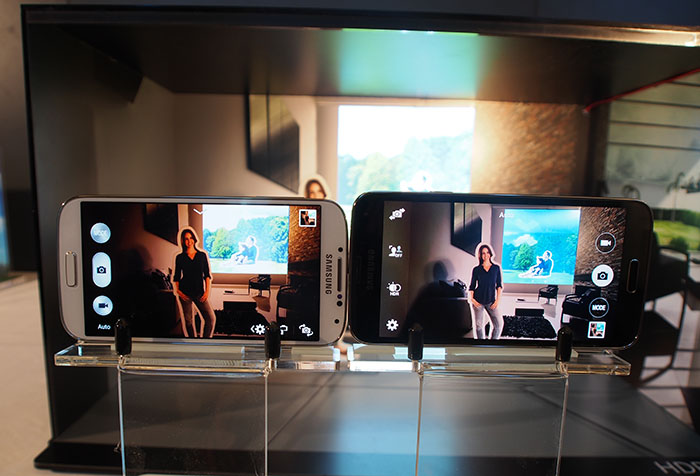 Another camera feature showing great potential, but perhaps in need of a bit of fine tuning, is the S5's selective focus mode, which in theory, lets you take a shot and then select your focal plane later on. It's supposed to allow you to easily create shallow depth of field effects, and it works by taking a series of shots at different focal distances, and then lets you choose the best one later. In practice it didn't work all that well, as it sometimes failed to correctly focus between foreground and background objects unless they were very far apart, and it won't work at all for moving subjects, as you need to hold the camera steady while it's taking the shots. Even so, there's definitely great promise here, and we hope Samsung can refine it before launch. 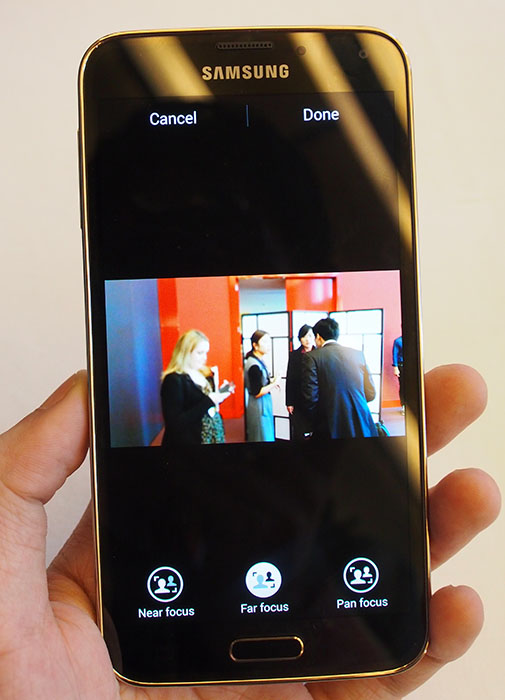 Like the S4, the S5 is compatible with 802.11ac Wi-Fi networks, and also boasts MIMO support, which will be good news for those with compatible routers. Even if you're not up to date with the latest router technology, the S5 also boasts an interesting feature called Download Booster, which utilizes both LTE and WiFi simultaneously to speed up data downloads - unfortunately we weren't able to see it in practice. The S5 is also compatible with 21 LTE bands worldwide, which Samsung tells us is currently the most of any smartphone.

The S5 is fitted with a heart rate monitor at the rear, just under the camera module - in fact, it appears to be the IR blaster/receiver that doubles up as the heart rate monitor. Put your finger over it and it can track your heart rate. It's not as elegant a solution as a fitness band or smartwatch like the Samsung Gear 2, but it does the job in a pinch if you're not wearing yours at the time. 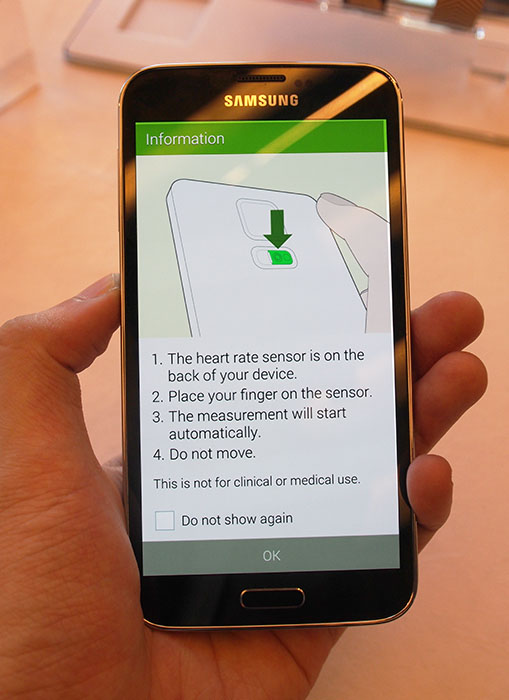 To complement the heart rate monitor, the S5 comes pre-installed with a number of fitness apps and trackers, including a calorie counter and pedometer. 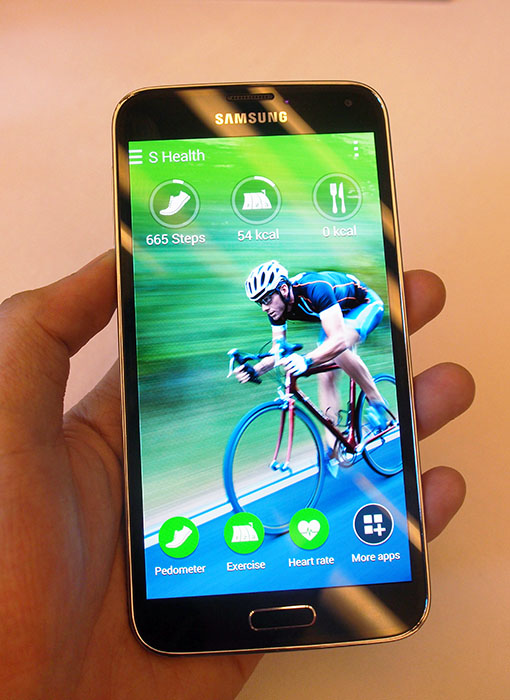 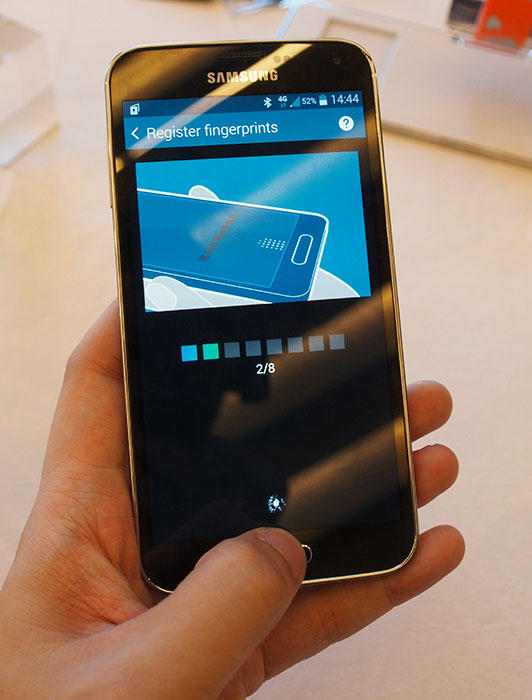 Unlike Apple, Samsung intends to let users use their fingerprint sensor for more than just unlocking their phone. Samsung has partnered with PayPal to allow for fingerprint activated web store checkout in more than 26 countries.

Samsung claims that the S5 will have 20% more battery power than the S4. We sneakily pried the back off of one of the display models to take a look for ourselves and found that the S5 is packing a 3.85V, 2,800mAh battery, slightly larger than the 3.8V, 2,600mAh battery of the S4. Will that translate into 20% more battery life? That remains to be seen, but in case it doesn't, Samsung has also introduced a new Ultra Power Saving Mode, which will dim the display and turn it black and white for the most aggressive power saving mode - useful if you're just barely holding on and you're not sure if you're going to be able to make it back to the nearest power plug. 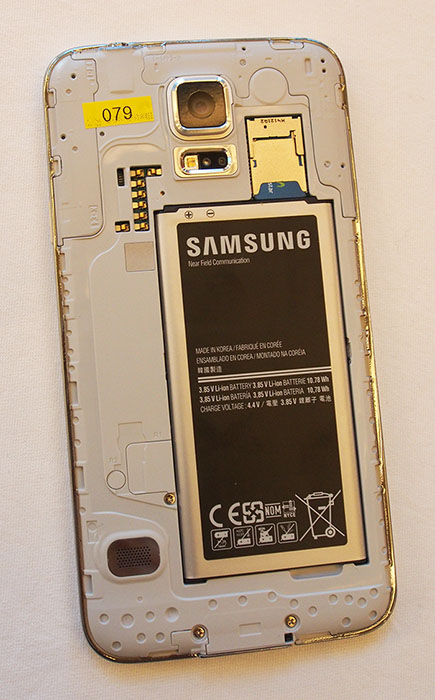 We're glad to see that Samsung has clearly put a lot more thought into what software features people will actually use on their phone and we expect many people will make good use of features like Download Booster, fingerprint checkout and real-time HDR mode. Even so, we were hoping for more from the S5, which, to borrow a naming convention from Apple, really resembles an S4S in many ways - a half step up from a previous model. Samsung may be playing it safe with the S5 by going 'back to basics', but with premium quadcore smartphones from emerging manufacturers like Xiaomi and Oppo hitting the market at even lower prices, Samsung will need more than just 'basics' and the latest hardware to stay on top of the game.

Prior to MWC 2014, many S5 rumors actually pointed towards a far higher spec smartphone, boasting a metal build and a QHD 2560 x 1440 display. Did this phone ever exist or was it all just a rumor? Samsung is undoubtedly capable of delivering an S5 Premium, and given its recent track record and enthusiasm for releasing numerous variants of existing models, it doesn't seem all that unlikely that such a phone may still be on the way. It's certainly an intriguing possibility.