From unlocking the crowd behavior of social animals to constellation simulation, GPGPU computing is entrenching itself in realms of science in ways that were unthinkable just a few years ago. At GTC 2012, there are many showcase examples of the company's strong interest in human advancement through practical application of its Fermi and Kepler GPUs. The adoption of GPU computing based on NVIDIA's solutions points to a recognition of the company's vision by the scientific community.

The video shown during CEO Huang's opening keynote address at GTC 2012. The software algorithm was actually refactored and optimized in order to take advantage of the parallel computing capabilities of Kepler. More specifically, by leveraging on the one of the newly-announced features of the GPU core, its Dynamic Parallelism feature, the tree hierarchy interaction algorithm behind this simulation was ported over in approximately 48 hours, which is a very short period in terms of software engineering timeline. We will discuss the new features of Kepler GPU core that has been revealed on top of the existing ones in a later article very soon. 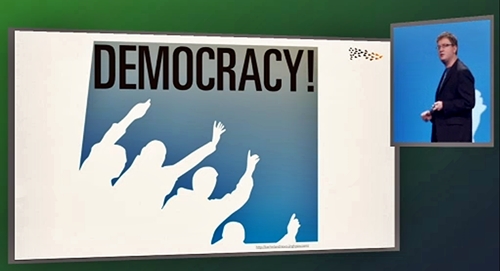 From the outer realms of our galaxy to our humble blue planet, NVIDIA graphical technology is also applied by scientists to understand and model the behavior of social animals. There were also studies conducted on the microscopic level, with research by the medical community to better understand cancer cells. Without the parallel processing power of the NVIDIA Kepler GPU processing, these very scientific simulations undertaken by those researchers takes minutes instead of hours. NVIDIA CEO Jen-Hsun Huang said that the company wants to be recognized by the scientific community, with these new features of the Kepler GPU core and its adoption showcased at GTC 2012, we believe that the recognition is not only apparent and is expected to grow in strength.