At just 2.15kg, the Dyson V8 Slim is its lightest vacuum cleaner yet
Shootouts

Clash of the SSD giants: Intel vs. SanDisk vs. Samsung

We have mentioned many times in previous SSD reviews that the market for SSDs is extremely competitive and price-sensitive. And the only way to remain competitive is to own your NAND production facilities or intellectual property in the form of the SSD controller or firmware. True enough, the best SSDs in the market today come from companies who fulfill the above mentioned criteria. 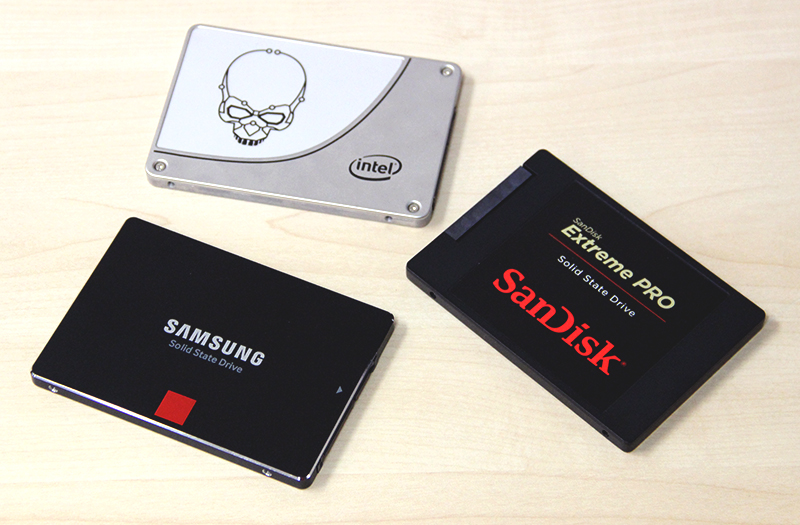 The most dominant company in the SSD business today is Samsung. They are number one in terms of NAND production and sales. Their drives are also very popular amongst users and OEMs. It should come as no surprise then that Samsung is one of a handful of companies that has successfully integrated all aspects of SSD manufacturing - NAND, controller and firmware.

Another company to do so is Intel. Intel has traditionally been very strong in SSDs and their early SandForce driven offerings in the form of the SSD 520 Series was very well-received. And although they have been quiet on the consumer scene for the past year or so, they still have a tremendous presence in the enterprise market.

SanDisk is another giant in the flash scene and because of their partnership with Toshiba, is one of the few SSD brands to have their own NAND production facility and therefore access to top quality NAND chips. And even though they do not have an in-house controller of their own, they make up for that by developing their own firmware for the third-party controller solutions that they use.

And so today, we are rounding up the flagship drives from these three companies to see which is best. It’s a three-way showdown featuring some of the biggest names in the consumer SSD scene - Samsung’s SSD 850 Pro, Intel’s SSD 730 Series and SanDisk’s Extreme Pro SSD.

Intel has been focusing on the more lucrative enterprise market in the past year or so, but launched its new Intel SSD 730 Series early last year. The SSD 730 Series is the company’s newest flagship consumer drive and it is an interesting drive for a few reasons. 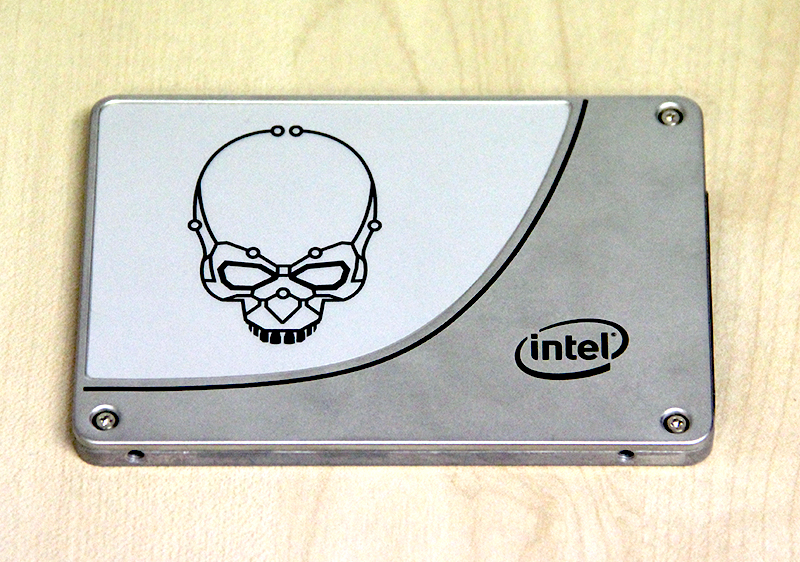 To begin, this is the first SSD since the older SSD 320 Series from 2011 to be fully developed in-house by Intel. This means that SSD 730 Series does not employ a SandForce controller, like the older SSD 520 and SSD 530 Series, nor is it driven by a Marvell controller. Inside the SSD 730 Series is in fact Intel’s own “Third-Generation controller.” This is the same controller used in Intel’s S3500 and S3700 enterprise-class SSD. It has an eight-channel design, but is running at 50% higher clock speeds in the SSD 730 Series than in the S3500 and S3700 - 600MHz as compared to 400MHz.

NAND comes in the form of Intel’s own 20nm MLC NAND part, but it is of the 128Gbit variety. This is an odd choice as we usually see 128Gbit NAND employed in drives targeted at entry-level and mainstream users and not high-end models. The reason for this is that higher density memory invariably leads to inferior write performance because the lesser dies and packages are required to make up the capacity, as a result the controller, which can write to multiple packages simultaneously, becomes under utilized.

And if one peels open the SSD 730 Series, they will find an extra die of NAND flash. This extra die appears on both 240GB and 480GB models and is used for over-provisioning and reserved exclusively for the controller to use. The reason for this is to provide better endurance as Intel has claimed that even the 240GB model is good for up to 50GB of writes a day and has a rated lifespan of 91TB of writes - most consumer SSDs of this capacity top out at 80TB. And as we have mentioned before, 50GB of writes a day is actually very high for mainstream users - even the most heavy mainstream users should only see around 20GB of writes per day typically. 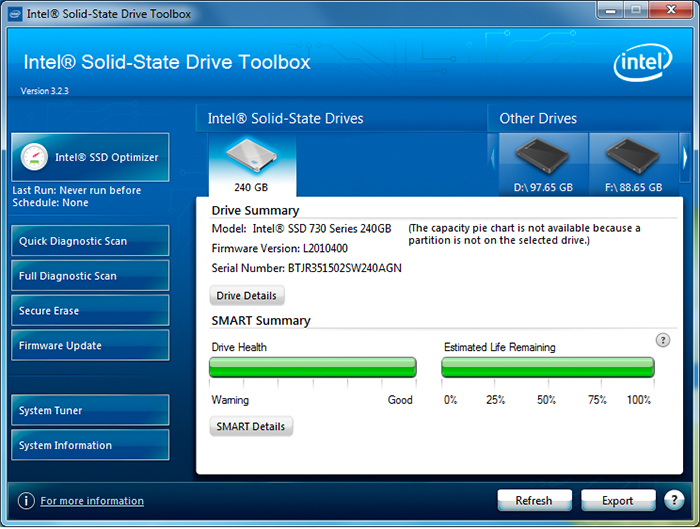 The SSD 730 Series is compatible with Intel’s Data Migration Software as well as SSD Toolbox, a utility that helps to optimize and monitor the drive and also update its firmware. It also supports 256-bit AES encryption, but not TGC Opal 2.0 nor IEEE1667. The drive comes as is with no other accessories. It supports the SATA 6Gbps interface. 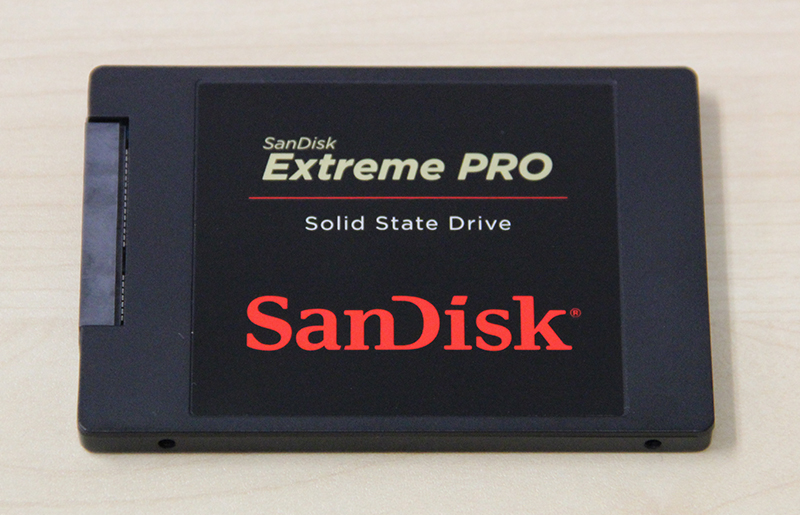 The Extreme Pro builds on the successes of its predecessor by using the same tried-and-tested Marvell 88SS9187 controller, but with updated NAND memory and firmware. NAND memory comes in the form of the SanDisk’s second-generation 19nm 64Gbit MLC NAND, which is essentially the same as Toshiba’s since both companies have a unique partnership with regard to NAND production. Interestingly, despite having the same rated endurance as its predecessor (80TB or roughly 20GB a day), SanDisk is offering the new Extreme Pro with 10-year long warranties. This is no doubt a marketing move, but one that is much welcomed since it improves vastly on the previous standard of 5-year warranties for flagship consumer drives.

This also means it has the same advantages and disadvantages of the older Extreme II SSD. To begin, the Extreme Pro SSD features an improved version of SanDisk’s nCache SLC caching technology called nCache Pro. This works by dedicating a portion of the NAND die to operate in SLC mode to improve random write performance. As for disadvantages, this means that like its predecessor, the Extreme Pro SSD does not support any form of encryption for security. 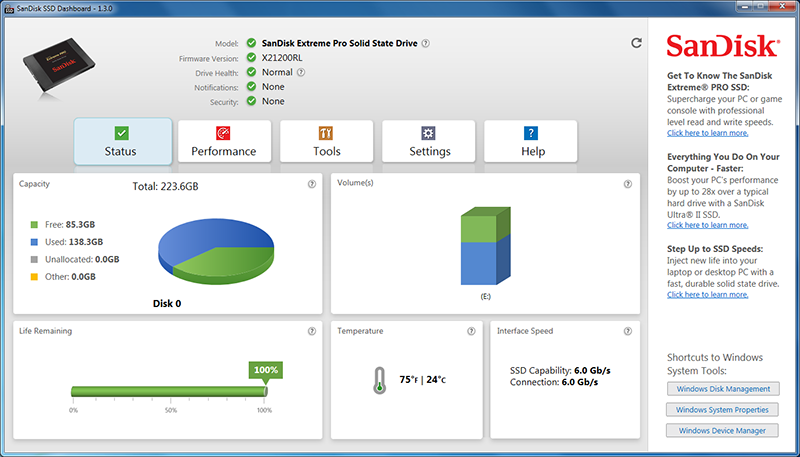 The Extreme Pro SSD is fully compatible with SanDisk’s SSD Dashboard utility, which lets users monitor and optimize the drive, and also allows for quick and easy updating of the drive’s firmware. The drive only comes with a 2mm bumper for installation. It supports the SATA 6Gbps interface.

Samsung’s SSD 850 Pro should be no stranger to frequent readers here. It is arguably the most important drive of last year, thanks to its use of innovative 3D V-NAND. 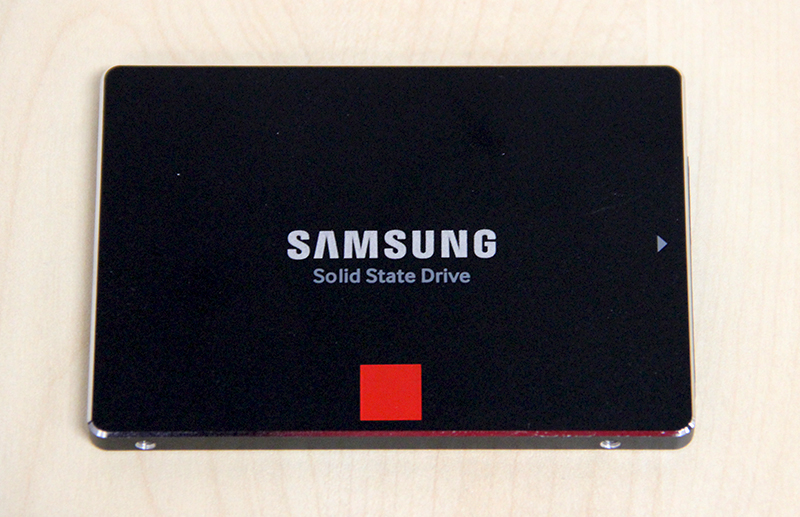 3D V-NAND stacks memory cells on top of each other in order to overcome the problem of squeezing cells closer and closer together. It’s an elegant and advantageous solution. Not only does this mean more cells can now be squeezed into a fixed area, stacking cells also improves performance, endurance and power efficiency.

Thanks to its high-tech 32-layer 3D V-NAND memory, the 256GB variant of the Samsung SSD 850 Pro has a rated lifespan of 150TB, more than double that of the SanDisk Extreme Pro and over 60% more than the Intel SSD 730. The Samsung SSD 850 Pro is powered by the in-house developed 3-core MEX controller and supports 256-bit AES, TCG Opal 2.0 and IEEE1667 encryption. It uses the SATA 6Gbps interface. The SSD 850 Pro also supports Samsung’s excellent Magician SSD utility, which lets users optimize the drive, monitor its status and also update firmware. The Magician utility also lets users enable RAPID Mode on the drive, a caching technology that makes use of spare system memory and CPU cycles to dramatically boost performance. We have tested it out before and found it to work very well. Samsung also provides a handy data migration software to enable users to quickly clone and setup their SSDs.

The three drives will be tested on our dedicated storage testbed:

Our revised benchmark ditches older benchmarks such as HD Tune and also includes an all new timing test to better evaluate the drive’s real world performance. The list of benchmarks used are as follows:

It will be interesting to see how the Samsung SSD 850 Pro fares against the flagship consumer drives from Intel and SanDisk. We have also included results of other popular drives such as the Crucial M550 and the recently reviewed Samsung SSD 850 Evo.