The Canon EXPO, held every five years, ended its four-city tour after New York, Paris and Tokyo last year to finish in Shanghai, China from 19 to 22 May 2011. Held at the Shanghai International Convention Center, the event was a showcase (or a reminder somewhat) of where Canon was (the very first 1934 Kwanon camera, 1956 Cine 8T 8mm camcorder and its first 1959 SLR camera the Canon Flex were on display) and where Canon is today.

We put up a short highlights video of the EXPO on HWZ TV last week, but in case you've missed it, here it is again: 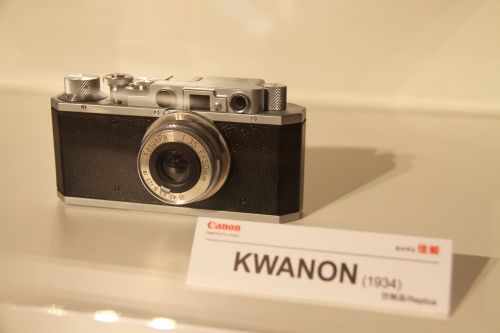 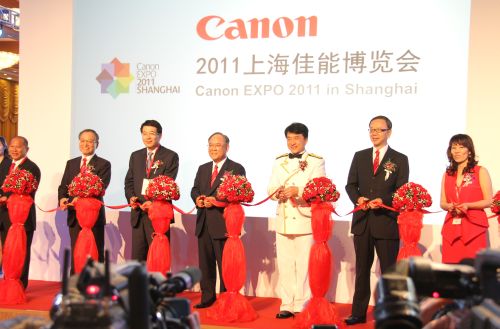 While the bulk of the exhibition covered just about everything we know of Canon as an imaging company today -- yes, it started off with the IXUS and PowerShot booths, PIXMA and SELPHY printer series, EOS DSLR cameras and lenses (including the highly coveted and recently announced EF 200-400mm f4L IM USM 1.4x Extender telephoto lens), Business Office solutions (ImageRunner series as well as distribution/printing solutions (part of its acquisition of Dutch firm Océ last year)), Medical solutions (X-ray and ophthalmic equipment) and remote surveillance cameras (a network version, which allows you to remotely control and view via a networked portable device like a tablet is planned for 2012), the EXPO has revealed the company's future goals, at least in a sense of where it's charting its course. 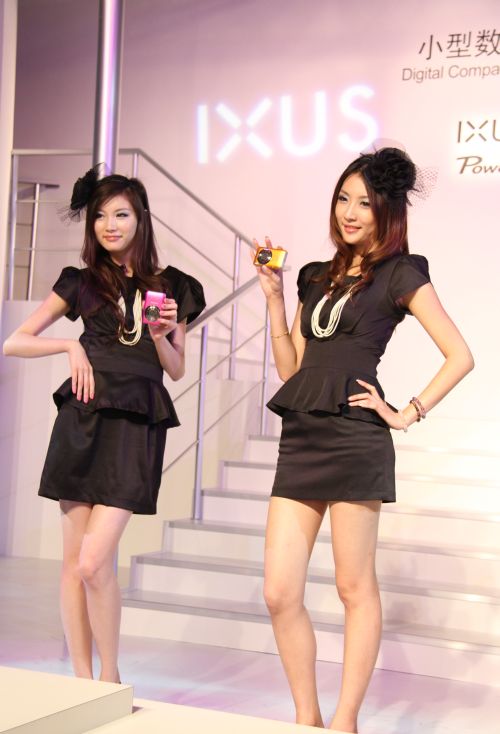 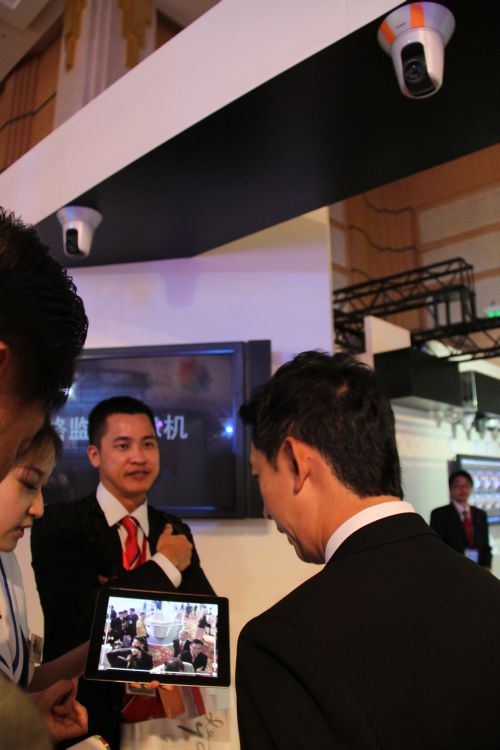 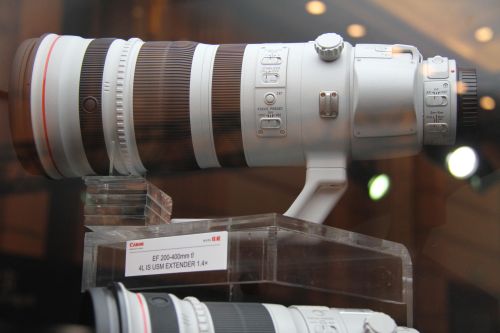 For instance, at an EXPO segment called Imaging Future, the company demo-ed a prototype but functioning 4K 8-megapixel multipurpose camera that employs a 2/3-inch CMOS sensor and a redesigned electronically controlled lens drive system. Not only does it shoot 4K moving images in access of 60 frames per second, it has a 24-480mm zoom lens (35mm equivalent), 20x optical zoom and aperture settings of F1.8 to F3.8. It is also encased in a bio-based plastic instead of certain petroleum-based plastic. 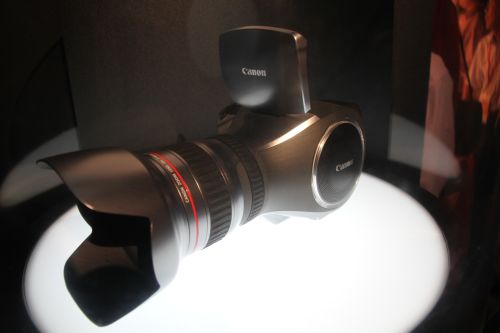 The resulting videos and images we saw (displayed on both a professional grade 30" 8 Megapixel-supported LCD screen and a 4K-resolution projection screen (powered by four WUXGA WUX4000 LCOS projectors). Other future technologies we saw included the Mixed Reality showcases, where visitors donned head-mounted glasses and viewed an augmented reality world to interact with. Different experiential scenarios included entertaining dinosaurs, a 3-dimensional cut-out of a DSLR camera, photocopier and the ability to use a special pen and palette indicators to draw, mix and match a shape or object in virtual space. The applications for this is tremendous for the creative and education industries. 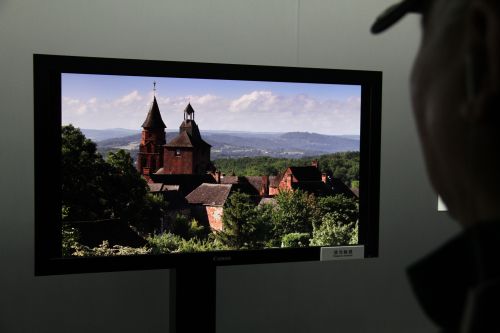 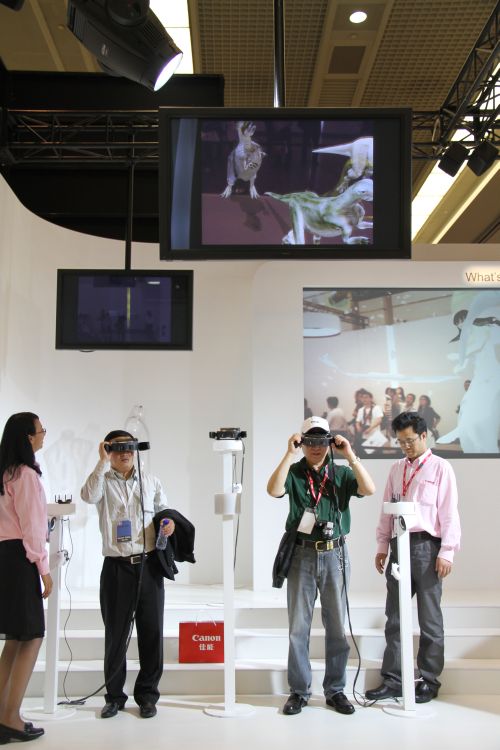 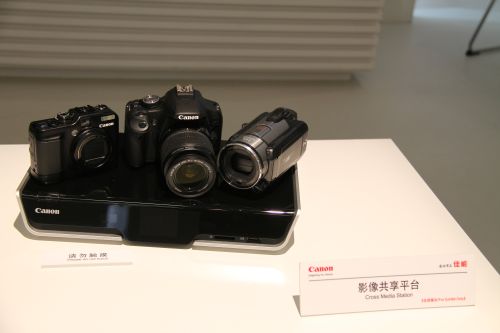 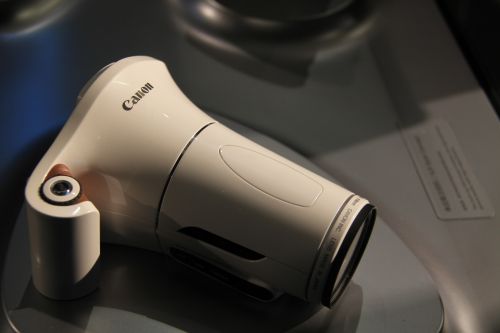 In our conversations and interviews with Canon executives, we learned that the company has no firmed plans for mirrorless technology-based cameras at the moment (something that's on everyone's minds however). What it does want to do is explore the possibility of making the DSLR camera body smaller and enhance features on existing imaging technologies like HD video recording and more intuitive navigation on cameras and camcorders.

The company is also embarking on an aggressive branding campaign across specific growth and emerging markets like China, India, Indonesia, Thailand and Vietnam. According to Mr. Hideki Ozawa, President and CEO of Canon China (and President of Canon Asia Marketing Group), Canon should move beyond just being known as an imaging company. He wants users of Canon products and services to view Canon as a personable friendly persona. This shift in branding strategy beyond just products and services is perhaps the Japanese company's biggest challenge, in light of increased competition in mindshare among the various industries and countries it is in (or has plans to enter). 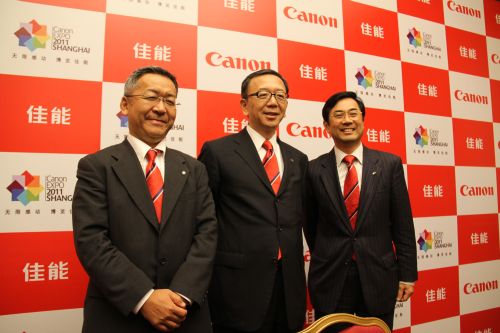 On the printer side, we learned that Canon does believe in wireless printing becoming more mainstream. What this means is that direct printing via the cloud, from portable devices like the tablet and notebook to the printer would become more prevalent and overtake printing from wired desktop systems. While no new products were announced at the EXPO, we have an inkling that this development will be something that's primary to Canon's product line-up soon.

According to Mr. Katsuichi Shimizu, Canon's Managing Director and Chief Executive for Inkjet Product Operations, the firm isn't too worried about product cannibalization among multi-function printers and single-function scanners and printers. According to Mr. Shimizu, he sees both as catering to the different spectrum of the market, and already, there are plans to begin production for additional inkjet printers at its second factory in Nakhon Ratchasima in Thailand this year. Canon currently produces about 20 million printers and scanners a year, and it is expected that the market for Asia will be 3-4 times that of America or Europe. 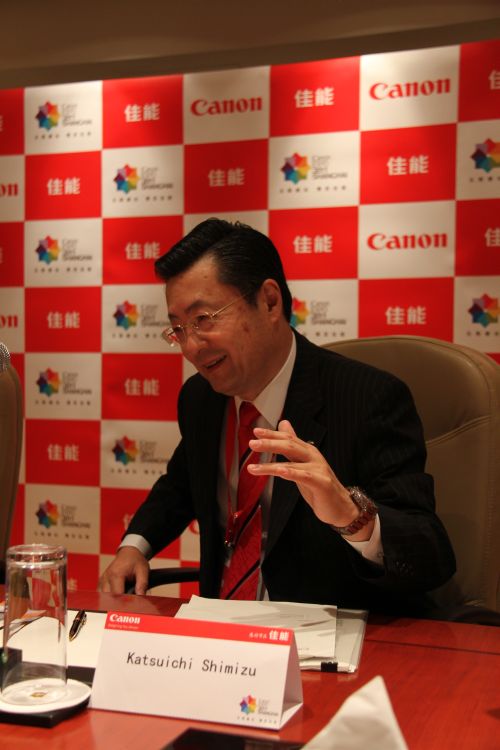 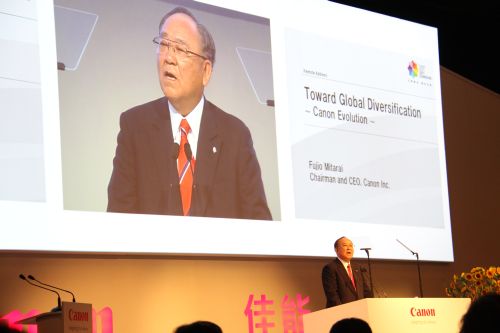 In his keynote speech, Mr. Fujio Mitarai, CEO and Chairman of Canon Inc., explains the importance of China as a driving force for the global economy with high 2010 growth of 10.3% (the first time since 2007). For ASEAN countries, Mr. Mitarai expects them to grow at an annual rate of 6% a year as exports recover and demand increases.

Since he became President of Canon in 1995 and later becoming CEO in 1997, Mr. Mitarai and his team have introduced various five-year plans to the company that changed the company inside out. While Phase I (1996-2000) saw the introduction of conveyor belt-based assembly and cell-based production systems in factories, Phase II (2001-2005) saw the beginning of product competitiveness in the form of 3D-CAD systems and in-house production of key components.

Phase III (2006-2010), which ended last year, was a strategy to reinforce its existing businesses in light of the shrinking global market due to the recession in 2009. The company is now moving into Phase IV (2011-2016), which will see the company expand its business domains and transform common manufacturing functions. One of these is to draw production closer to major consumption areas, including Europe and Asia, expand its range of products and adopt greater social responsibilities as a good corporate citizen.

Besides allocating management resources (people, goods and capital) to push growth in China and the rest of Asia, Canon will also set up a new research center in the United States to focus on cutting edge technologies while promoting diversification of business products via its new acquisition, Océ, the Dutch-based business printer solutions company.