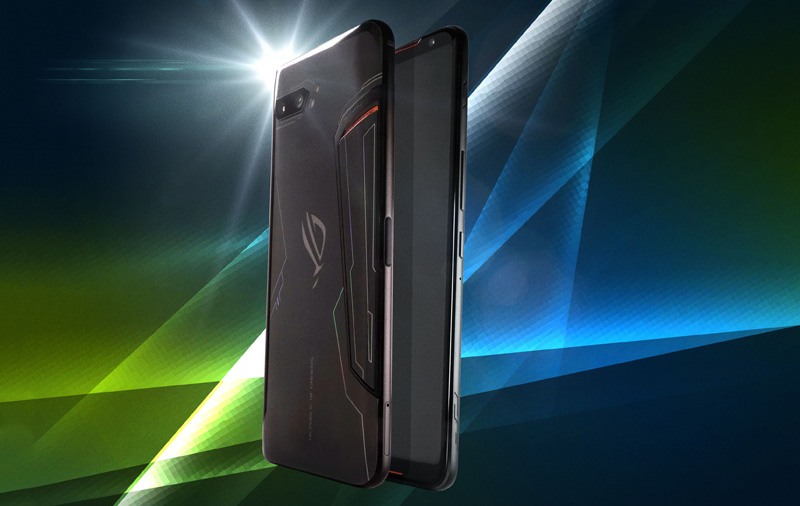 The ASUS ROG Phone II follows much of the same form and design aesthetic of last year’s original, where it stood out for its Air Triggers – touch-sensitive sensors that act as the shoulder trigger buttons on a game controller.

But there are noticeable changes that make the ROG Phone II more appealing this time around. The offset fingerprint sensor has been removed from the back and replaced by an in-display sensor, and the smaller vent is now functional. Under its hood, this year’s model also comes with increased battery capacity (6,000mAh), speedy UFS 3.0 storage, an incredible 12GB of RAM, and bragging rights for being the first smartphone to sport a 120Hz refresh rate 2,340 x 1,080 HDR10 AMOLED display, as well as the fastest Snapdragon 855 Plus chipset available.

Running on Android 9 Pie, the ROG Phone II looks fairly contemporary upfront. The display is framed by black edges less than a centimetre thick at the top and bottom, with its largest visual standout being the copper-grilled front speakers.

It’s on the back where things take on a decidedly flashier aesthetic. There’s a heatsink embedded in a glossy plastic section stamped with the words ‘ROG Aerodynamic System’; basically a vapour-cooled chamber system much like what its predecessor uses. Ringing the phone’s sides are the usual bevy of connectors: a USB Type-C port, a 3.5mm headphone/mic port, the power button, and a volume rocker.

Of interest is the mobile Armoury Crate app, which functions just like its desktop counterpart. You get a system monitor with usage and temperature readings, options to adjust fan speed on the included AeroActive Cooler accessory, and Aura Lighting controls. Yes, this phone does have RGB lighting, strobing away via the ROG logo on the back when X Mode is on.

Another bonus add-on is the programmable Air Triggers accessory, which simulates bumper triggers on a controller for greater control flexibility. However, these are sensors and not physical springs, so don’t give sensitivity along the lines of an actual gamepad.

The ROG Phone II is capable of a lot, but its cameras are its weakest point. It has a dual-lens camera system on its back, comprised of a 48MP main lens and a 13MP 125-degree wide-angle lens. It sports the same Sony IMX586 image sensor as the ASUS ZenFone 6. Image quality is acceptable but not quite what you would expect from an S$1,598 phone.

This is a phone built for gaming and for gamers, in terms of both hardware and design, and it looks and feels great to use in my experience with Mobile Legends: Bang Bang and PlayerUnknown’s Battleground Mobile. The swathe of accessories paints some interesting possibilities too, though the entire suite costs nearly as much as the phone.

For a more detailed assessment, features, and capabilities, check out our full review of the ASUS ROG Phone II.