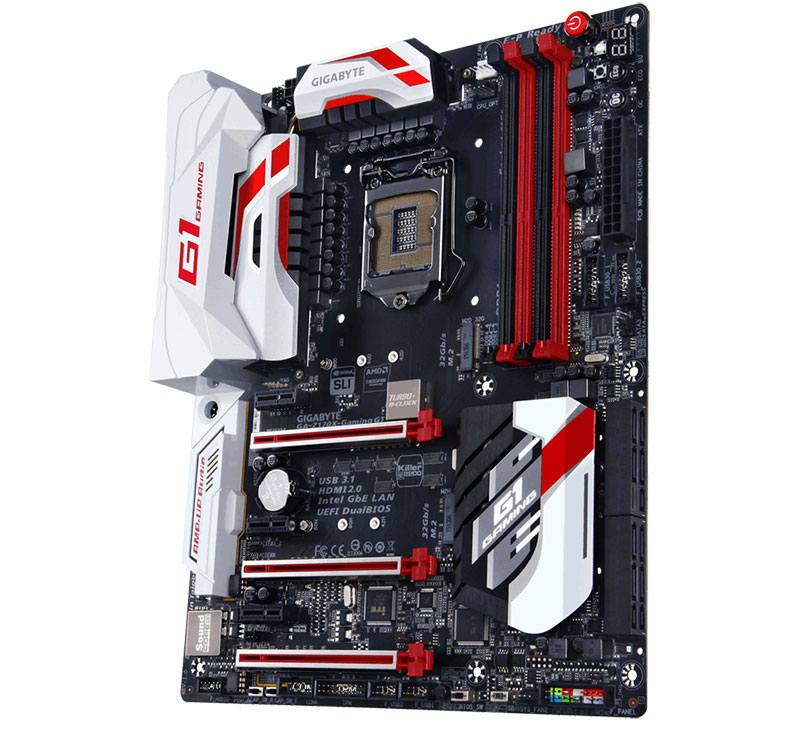 Frankly speaking, we found the choice of color combination a tad bit jarring. To our eyes at least, the matte black PCB is too muted a background for the striking red-and-white I/O shield and heatsinks. Even the RAM slots use an alternating red and black color scheme. The PCIe slots are red and silver, and we can’t help but think that maybe black should have been used in place of the red. 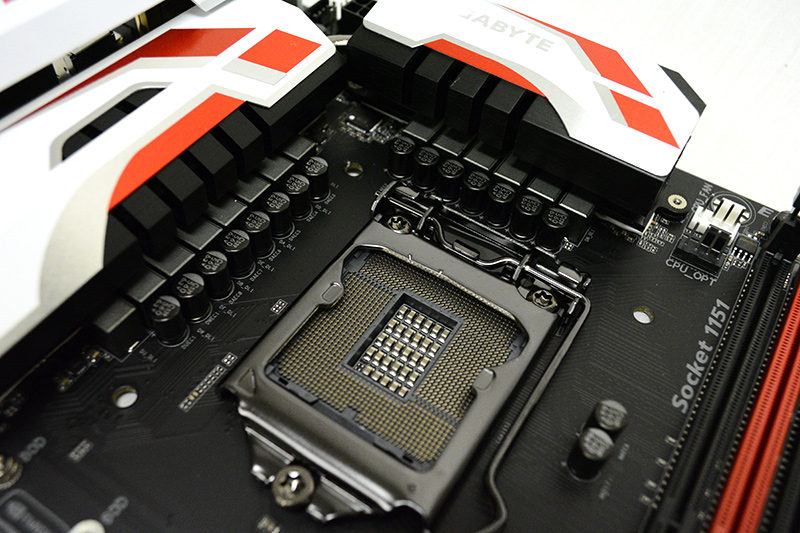 But on the topic of the PCIe slots, one standout feature is the use of stainless steel shielding to reinforce the slots. According to Gigabyte, this boosts the retention force by up to 3.2 times and adds resistance to shearing forces – as when you wriggle the card to remove it – by up to 1.7 times. Of course, we have no way of verifying these facts, but those are the figures if you want them. Nevertheless, we’re sure we’re not alone in worrying about a board’s PCIe slot when installing a particularly heavy card, so it’s definitely reassuring to have some form of structural reinforcement. 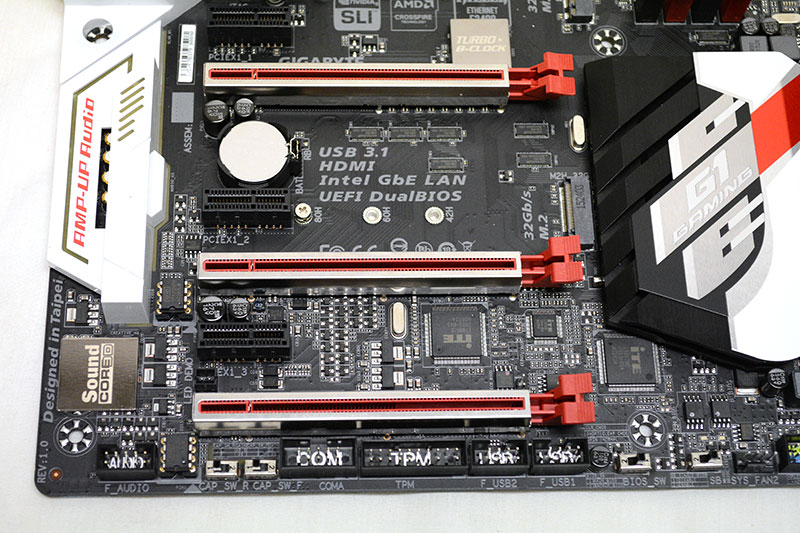 The board has three PCIe 3.0 x16 slots, all of which sport the stainless steel shielding. Gigabyte has also taken care to leave an extra-wide gap between the first and second slots in order to leave sufficient room for ventilation in dual-graphics cards systems.

Note that we mentioned a second M.2 slot, and that’s because the board actually has two, which support both PCIe and SATA devices. The topmost slot runs entirely off the PCIe 3.0 lanes on the chipset and doesn’t share bandwidth with any other slots, so this is your best bet if you have just one M.2 drive. 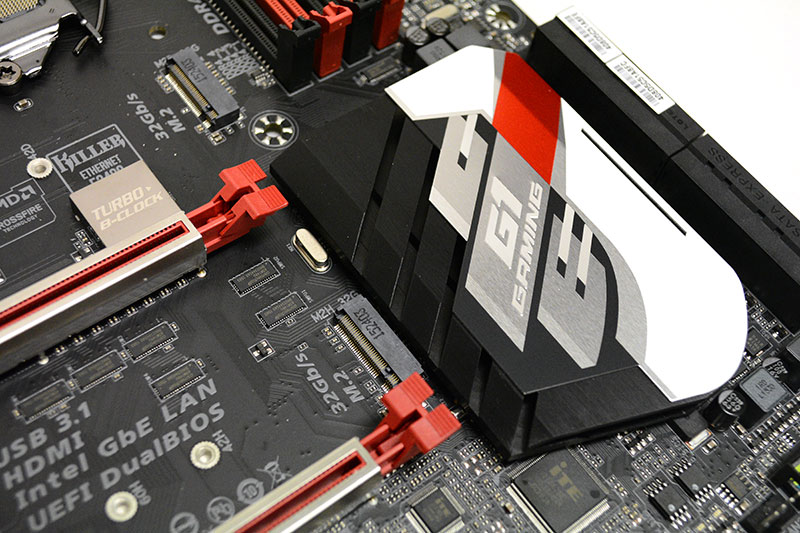 Gigabyte has also gone with a total of eight SATA 6Gbps ports, six from the Z170 chipset and two from an ASMedia ASM1061 controller. In addition, there are three SATA Express connectors thrown into the mix as well.

Moving on to the rear I/O panel, we have one USB 3.1 Type-C port, one USB 3.1 Type-A port (red) and five other USB 3.0 ports. The white port is the Q-Flash Plus port that allows you to connect a thumb drive with the latest BIOS file on it and update the BIOS without needing to install the CPU or memory. The yellow ports are also USB 3.0 ports, but they double as USB DAC ports that enable you to hook up a USB DAC.

One thing to note is that Gigabyte has gone a different route with its implementation of USB 3.1 support, opting for the Intel Alpine Ridge controller instead of the more common ASMedia ASM1142. Unlike the latter controller which supports just two PCIe lanes, Alpine Ridge is a four-lane PCIe controller that supports the maximum data rate of USB 3.1.

There are also the usual HDMI and DisplayPort connectors, and a legacy PS/2 port that we’re pretty sure no one will be needing.

Dual Gigabit Ethernet ports are present, but teaming is not supported. One of the ports uses an Intel I219-V controller while the other uses a Killer E2400 chip.

This time, the audio solution doesn’t use the Realtek 1150 codec, and instead relies on a Creative Sound Core 3D processor. In addition, there are two TI Burr Brown OPA2134 operational amplifiers and Nichicon Muse MW audio capacitors. Furthermore, the op-amps can even be swapped out for higher-end parts if you wish, or if you want to alter the sound signature. Now, here’s something you don’t see every day in an onboard audio solution!

The board also comes with a dual BIOS switch, which should be a welcome feature for overclockers. 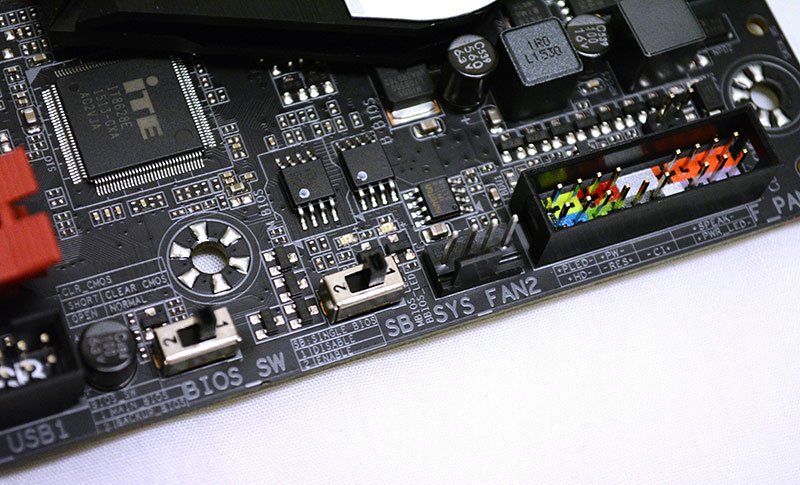