Nearing the end of last week, AMD approached us to sit in for a con-call. During that time, we were given a break down of their projects, endeavors, as well as their plans for engaging their consumer base in the realm of VR. This concall was meant to tie-in with their Capsaicin event at GDC 2016, where the Sunnyvale company made several announcements, as well as unveil some new devices. 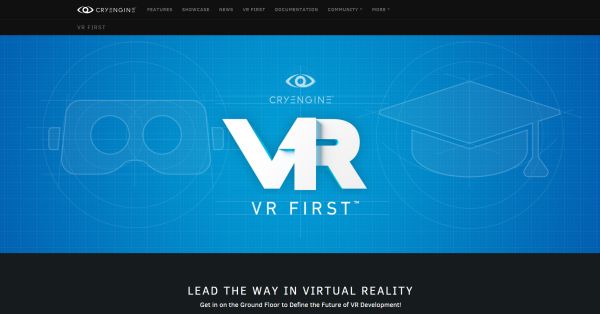 The first big news that AMD's Roy Taylor, Corporate Vice President of Alliances, Technology and VR, shared with us over the phone was the company's VR First partnership will be with video game developer Crytek, and that the developer would be AMD's exclusive GPU partner for all their VR initiatives in the future.

For those of you who have been around the industry long enough, you'll know that Crytek and AMD have a history in the video game industry, with the developer having used AMD's GPUs as the driving force behind their critically acclaimed Crysis 2 and Crysis 3 titles. 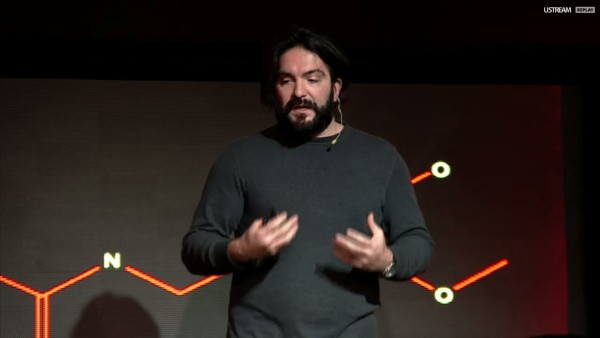 The new partnership between AMD and Crytek isn't just aimed towards bringing the VR experience to gaming, but also into the field of higher education. In fact, more than 10 global universities have already agreed to be part of AMD's VR First initiative, and of the 10, one university in Turkey, the Bahçeşehir University in Istanbul, has already become the first university to adopt AMD's VR First program, with both AMD and Crytek providing the tuition and hardware support needed to educate students in the fields of design, cinematography, stage direction, and even audio placement.

On a more surprising note, Taylor also told us that AMD was also working with a professor, down at the University of Southern California (USC) who was using VR technology in order to treat a subject suffering from PTSD (Post Traumatic Stress Disorder).

The professor was also hoping that, through the use of VR, he would be able to understand how elements of stress could easily affect the human mind, and from there, ultimately create a solution that would help alleviate the stress that people feel.

Taylor told us that by the end of the year 2016, AMD would at least be powering close to 83 percent of all tethered VR experiences around the world.

To kickstart this initiative, AMD has already gained a foothold in the surging VR market that is currently happening in China, and has already begun converting simple iCafes (basically, China's version of an Internet cafe) into VRCafes, all over the country.

In addition to this, Taylor mentioned that AMD would also be launching their "Radeon VR-Ready Premium" badge program, which is essentially a program similar to NVIDIA's own VR Ready program, which serves to inform consumers if an AMD-based system (custom built or pre-built) is capable of providing a seamless VR experience.

All Hail The Radeon Pro Duo 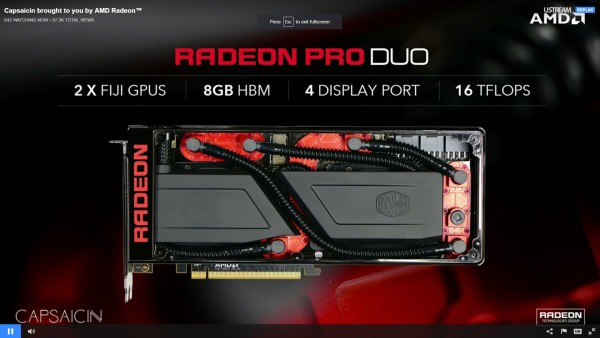 It seems the rumors were true. AMD's flagship 28nm dual GPU graphics card is no longer known as the Fury X2. It's official name henceforth is now the Radeon Pro Duo, and AMD hopes that their new flagship graphics card will be the card of choice for consumers looking to enjoy high-end VR content.

Using two Fiji XT GPUs that give a combined total of 8GB worth of AMD's new HBM format, the Radeon Pro Duo will essentially hold the title of being the world's most powerful graphics card, with compute performance of approximately 16 TFLOPS, which is far more than the originally speculated 12 TFLOPS that AMD had mentioned prior. 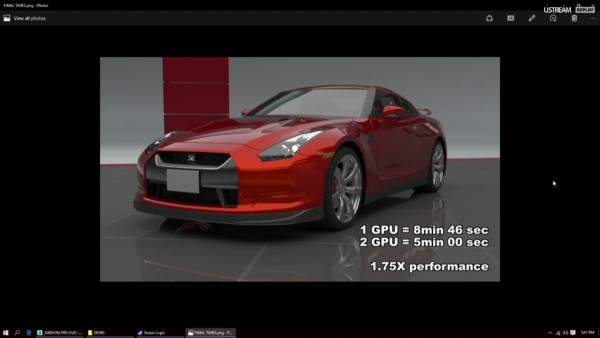 The Radeon Pro Duo isn't just a card for gaming either. In a brief on-stage presentation, AMD showed the crowed that its new dual GPU card was also capable of acting as a world-class workstation graphics card, and ultimately made the legitimate declaration that the Radeon Pro Duo was also the world's first workstation graphics card using HBM technology. 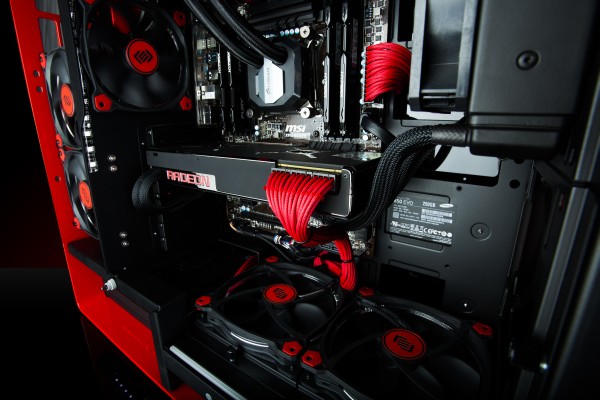 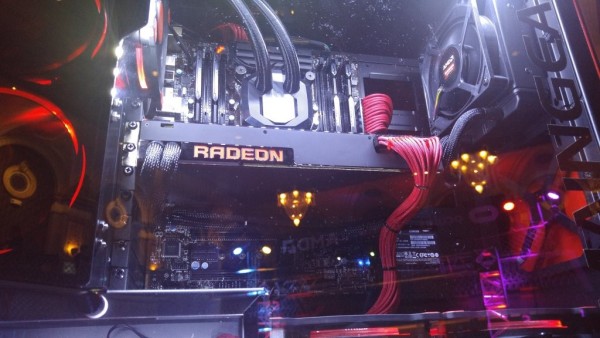 Judging from the glances and stock images that AMD showed off during the event and the subsequent information flow on the card, it seems that the Radeon Pro Duo will require the use of three 8-PIN ATX power connectors. Despite,this, we still don't quite have a clear idea as to just how much power the card will be drawing, but if speculations and third-party calculations are to be believed, it is possible that the card will be pulling anything between a maximum of 525W or 750W. But, these are all just speculations, and we would advise that you wait for AMD to make an official statement on its maximum power draw in the future.

Now, comes the most important point of the card's launch: its price. When it becomes available, the Radeon Pro will retail at US$1,500 (approx. RM6,168), which is exactly the same as the price of the company's previous-generation dual-GPU card, the Radeon R9 295X2. 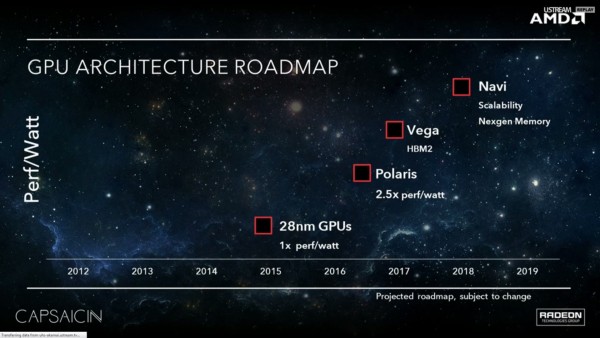 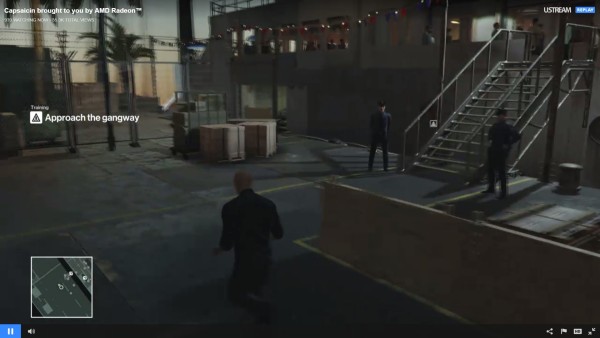 On the subject of AMD's Polaris 10 GPU architecture, the company didn't have a physical fabrication of the new 14nm FinFET GPU to show us, but what they did do was provide us a look at their GPU roadmap, along with a very brief presentation of the GPU running the new Hitman title at constant 60 fps, on a resolution of 2,560 x 1,440p. 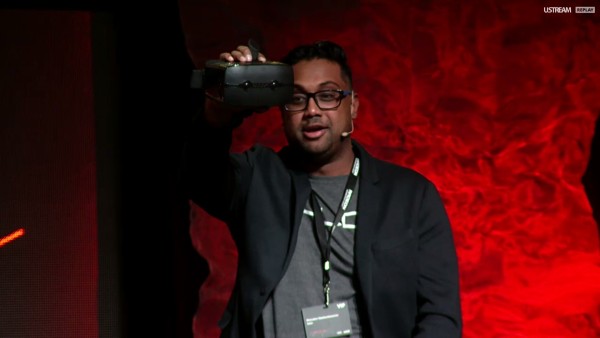 With all the talk being focus on VR, we were actually caught off-guard with the introduction of the Sulon Q VR headset at the AMD Capsaicin event.

Here's what we know about the device: it was built in collaboration with Toronto-based startup, Sulon Technologies, and just like the Oculus Rift and the HTC Vive, it is a VR headset. But that's where the difference between the Sulon Q and other VR headsets end. 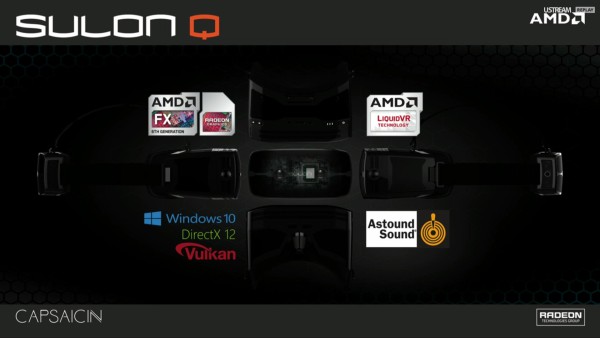 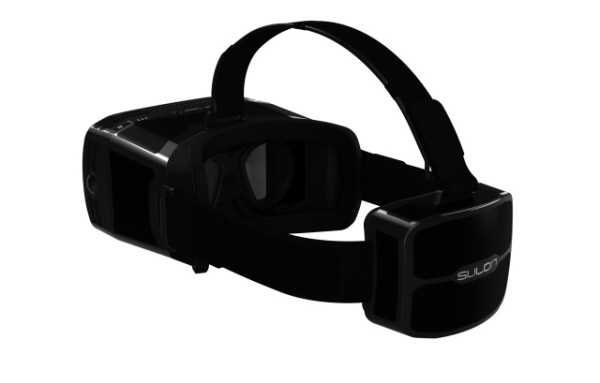 The Sulon Q is something of a self-sufficient VR headset: inside the headset, AMD has managed to install a full-fledged Windows 10 PC. Specs wise, the headset houses a quad-core AMD FX-8800P processor, a Radeon R7 GPU, a 256GB SSD, and 8GB of RAM. But the most important feature of the headset is that it houses a 2,560 x 1,440 OLED display with a 110 degrees field of view.

At a glance, it's actually an interesting initiative by AMD to create a self-sufficient VR headset, but when you consider that mobile corporations such as Samsung and their smartphone-enabled Gear VR headset, it's easy to see the stark difference in size and weight between the two headsets.

Size and weight aside, the Sulon Q further sets itself aside from other VR headsets via the use of a Spatial Processing Unit, a processor which AMD says is a combination between real-time machine vision technologies and a mixed reality spatial computer which "provides real-time environment mapping and tracking from the inside outward, dynamic virtualization for VR/AR fusion, and gesture recognition.

AMD didn't say when the headset when the Sulon Q would be commercially available, neither did they drop a price of it, but rest assured, we'll update you with that information when it officially becomes available at a later date.

AMD And Taking To The Big Screen 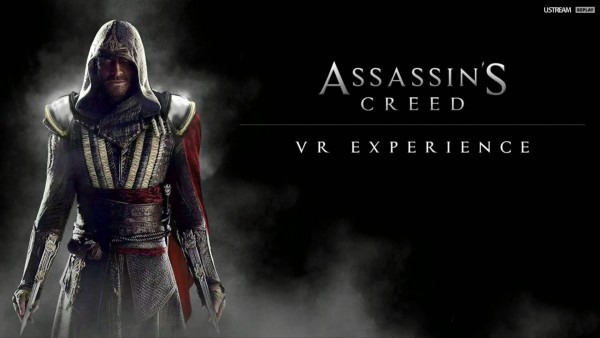 As we mentioned, VR isn't just being used in the realm of gaming, and neither is it just being extended into the space of higher education. During the Capsaicin event, AMD announced that they would be working with movie studio 20th Century Fox in order to provide the company with the hardware that would give the studio the ability to produce movies that are implementing the technology.

In fact, the first movie that the film studio will be implementing VR into is the upcoming Assassin's Creed film, which stars Michael Fassbender and Marion Cotillard. Sadly, the studio's representative didn't divulge alot of information as to how they would implement VR, and told us that we would have to wait until the premier of the film to see. 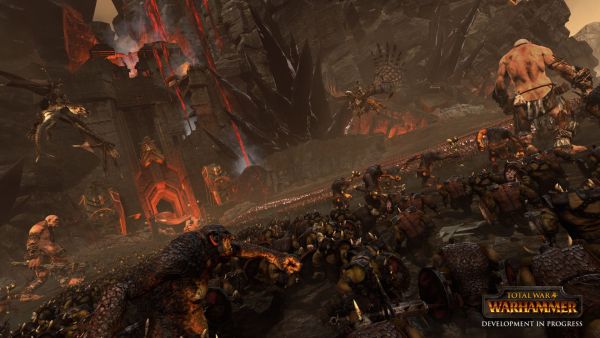 Love it or leave it, AMD's success with the new DirectX 12 API has been nothing short of mind-blowing, with titles such as Ashes of the Singularity benefiting greatly in its performance brought upon from the API and AMD's Asynchronous Compute Engine. 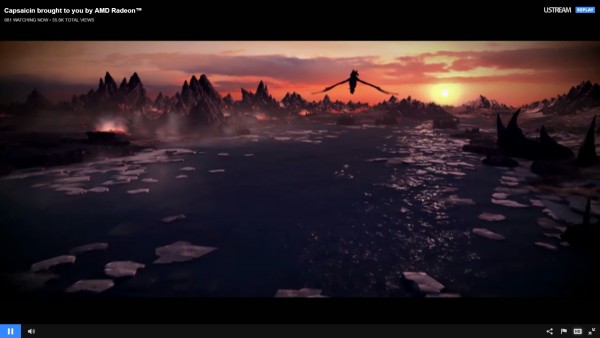 As an added bonus, Taylor informed us that AMD would announce during their Capsaicin event that they would be the exclusive GPU partner with video game publisher Sega, and that they will be helping Sega to release their new Warhammer: Total War video game as a DirectX 12 title to the market. 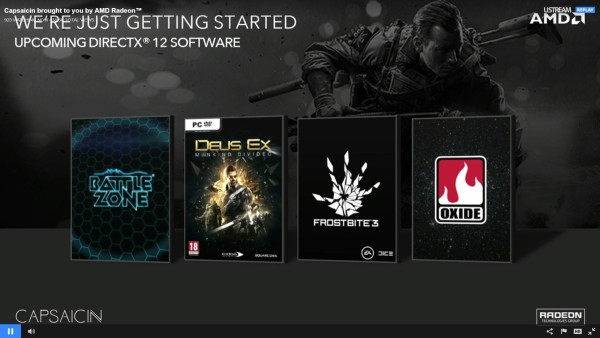 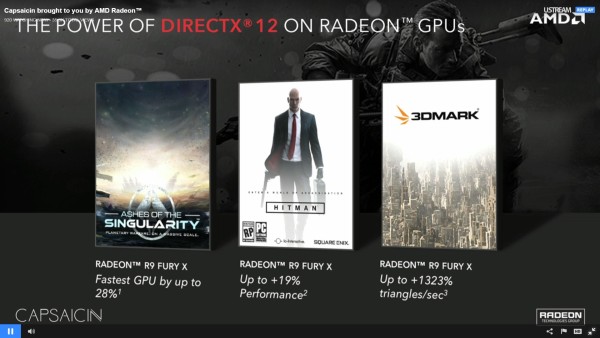 Of course, this wasn't the only game that was running on the DirectX 12 API. In addition of this presentation, the company also mentioned that several games and game engines that is supported by AMD's Asynchronous Compute Engine (ACE) will be switching to the use of DirectX 12. This includes titles such as Deus Ex: Mankind Divided and the upcoming Sniper Elite 4 title from Rebellion Games.

That's all the news we've got for you from AMD's Capsaicin event at GDC 2016. Check back with us, as we'll be bringing you more updates from AMD, and other participants at GDC 2016 this week.