The configurations of the test setups we used for the different processors are listed below.

Cinebench R15 utilizes up to 256 threads to evaluate a processor’s performance in a photorealistic 3D rendering.

Unsurprisingly, the Threadripper 2990WX charted a blazing path here and it was around 53 per cent quicker than the 16-core Threadripper 1950X in the multi-threaded benchmark.

However, the single-threaded benchmark is where Intel's Core i9-7900X continues to shine. 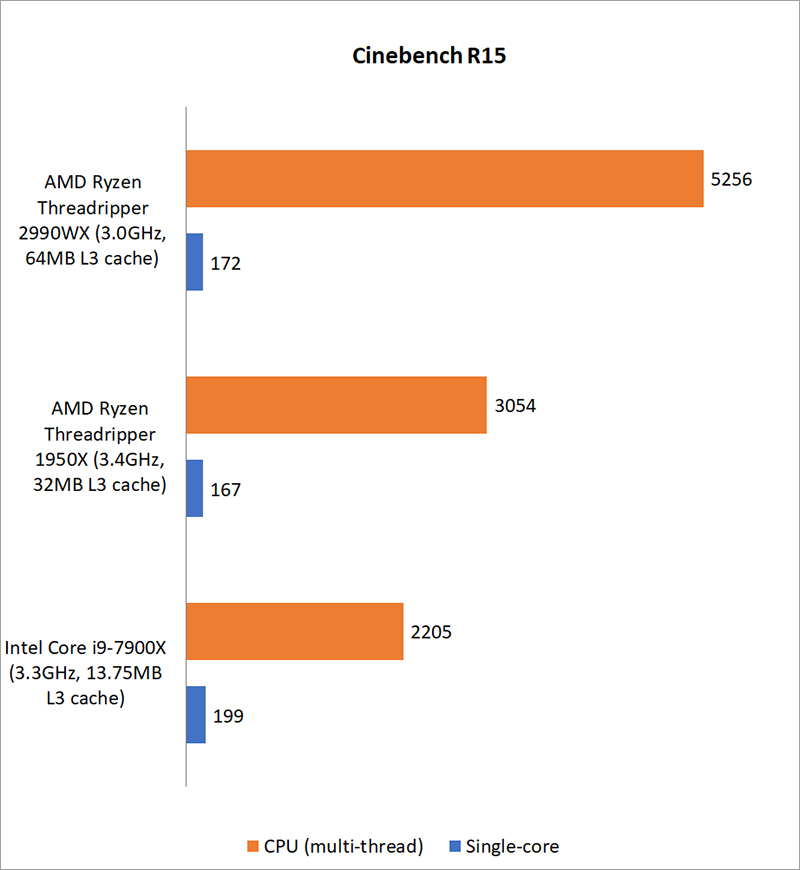 SPECviewperf is used to assess the 3D graphics performance of systems in professional applications. Each individual workload, called a viewset, represents graphics and content from an actual real-world application. SPECviewperf actually runs a total of eight different viewsets, but we’ve picked the four which have the greatest performance variation across CPUs display here.

The 3ds-max viewset comes from traces of the graphics workload generated by 3ds Max 2016, while maya-04 is derived from Autodesk’s Maya 2013 application. The catia-04 viewset involves the numerous rendering modes from the CATIA V6 R2012 application, and includes things like anti-aliasing, depth of field, and ambient occlusion. Finally, the sw-03 viewset comes from SolidWorks 2013 SP1, and involves various rendering modes including environment maps.

The Threadripper 2990WX didn't do well here, falling behing the 1950X and Intel Core i9-7900X in a couple of benchmarks. It also seems like select viewsets such as maya-04 heavily favor the higher clock speeds offered by the Intel Core X chip as both Threadripper chips ended up lagging behind. 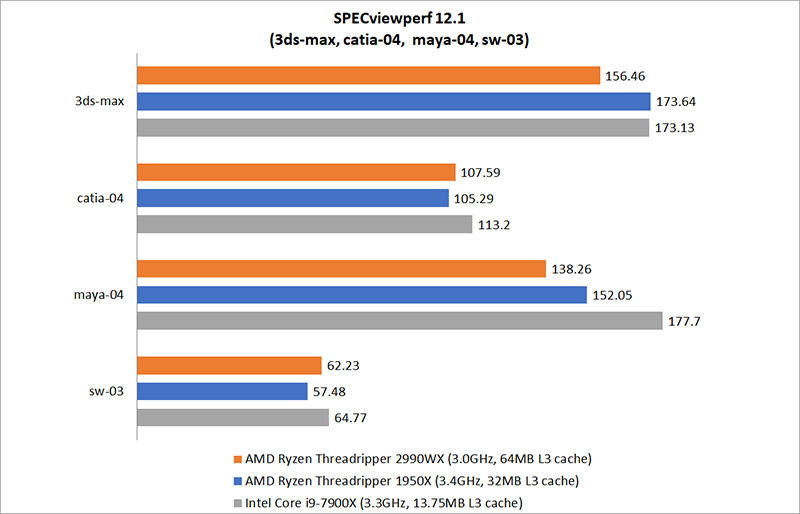 Handbrake is a video transcoder that converts videos into a format for use on PCs and portable electronic devices, and is a good indicator of a processor’s video encoding capabilities. YouTube content creators, Twitch streamers, and other video creators will be most interested in this performance metric.

The 64 threads on the Threadripper 2900WX helped it edge ahead here while transcoding a 1.5GB .mkv file. It's a good bit faster than the 1950X and Core i9-7900X, even though we've observed that Handbrake tends to evince diminishing returns beyond six cores. 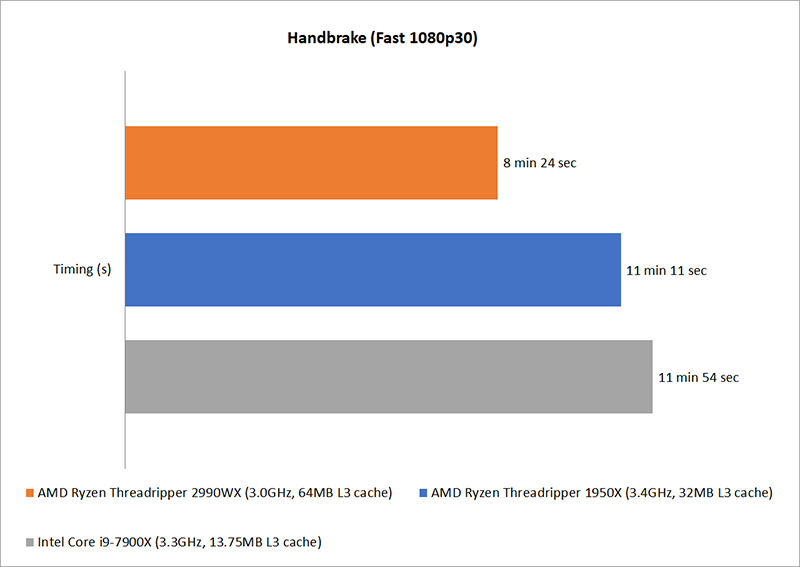 These benchmarks offer just a peek at a slice of the Threadripper 2990WX's performance, but its Cinebench score leaves little doubt that it is a multi-threading beast for the professional applications that can fully utilize it.

However, seeing as how it ends up trailing in some viewsets in SPECviewperf 12.1, it doesn't always come out ahead, and its relatively low 3.0GHz clock speed might still see it losing out in certain workloads. That said, I have to say that a 3.0GHz base clock is overall a very respectable speed for a 32-core CPU, and the Threadripper 2990WX certainly looks like it has what it takes to deliver the performance its target audience needs while not compromising too much on single-threaded performance.

At S$2,738, this isn't a chip that even a hardcore gaming enthusiast would pay for. Instead, it's professionals whose work revolves around 3D and VR animation and simulation, character modeling, massive virtualization, and professional 3D ray tracing and rendering who will find the greatest utility in this processor.

We'll have a full review coming soon, so stay tuned for a more comprehensive look at the 2990WX's performance.