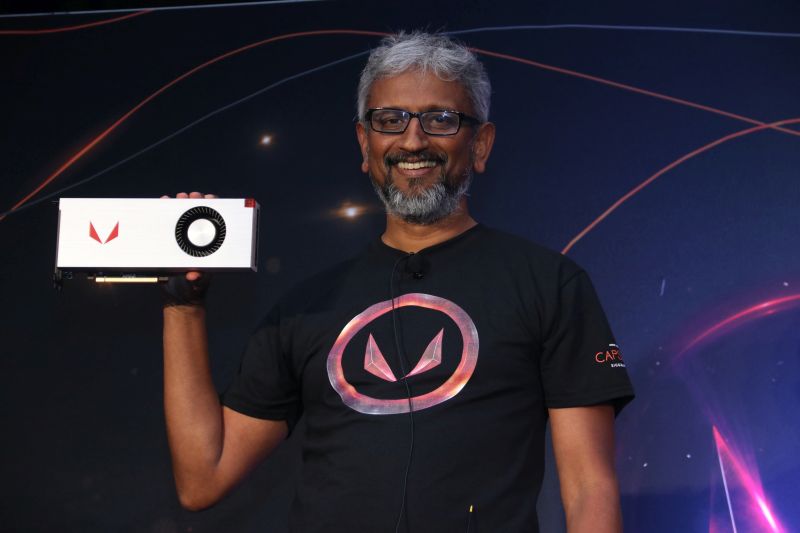 It’s been two years since AMD last launched a high-end performance graphics cards into the market, the last one actually being its Radeon R9 Fury X series and the less talked about Radeon Pro Duo.

Beyond that, however, the card was also a representation of something else for the CPU and GPU maker: innovation and the arrival of its then brand new High Bandwidth Memory (HBM) format.

But that was then, and in the time since then, AMD had toiled over its next-generation enthusiast graphics card and its next step in the memory format, HBM2. 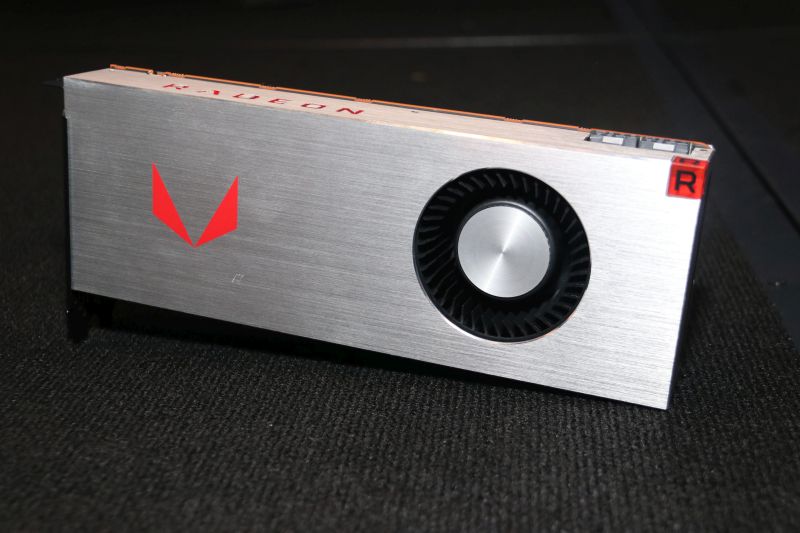 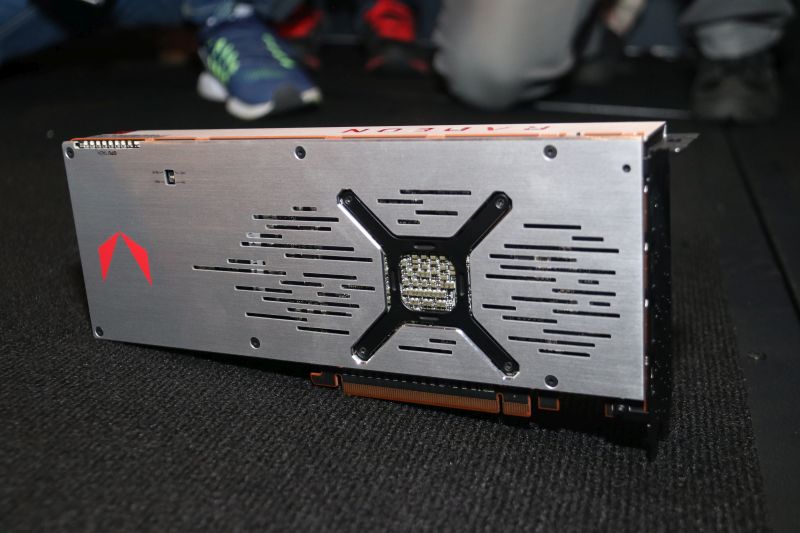 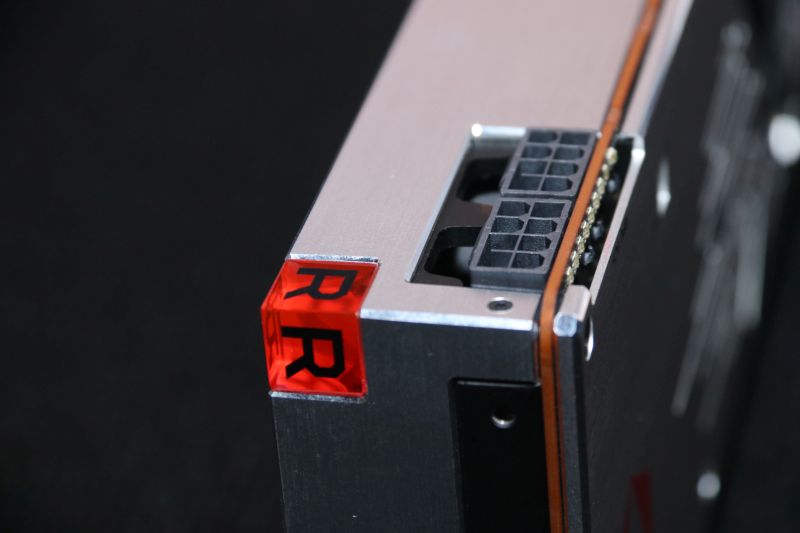 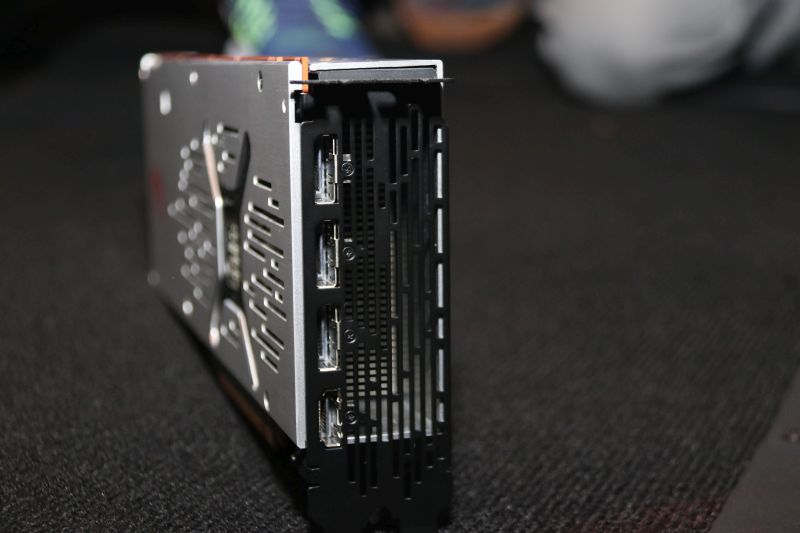 The end result of its efforts came to light yesterday, when during its tech day (in conjunction with the annual SIGGRAPH convention), AMD officially bared its new high-performance graphics card, the Radeon RX Vega 64, on stage in all its glory.

With development, planning, and fabrication of the card having spanned over a two year period, the Radeon RX Vega 64 finally brings AMD’s GPU family full circle, sitting at the top of the company’s own graphics pedestal, while the Radeon RX 500 series graphics cards envelops the entry-level and mid-range categories.

Quoted by AMD to be a card that is “engineered for serious gamers,” everything about the card had been designed by AMD from the ground up. Specs-wise, the card features 64 Next-gen Compute Units and 4,096 Stream Processors built into it.

The Radeon RX Vega 64 is also fitted with 8GB of HBM2, which sports a base clockspeed of 1,247MHz and a boost clockspeed of 1,546MHz, spread across a 2,048-bit memory bus. Compared to Fiji, the memory bus width is half the size of, but compared to the Radeon R9 Fury X, AMD has actually managed to achieve higher clockspeed with the new HBM2 format . 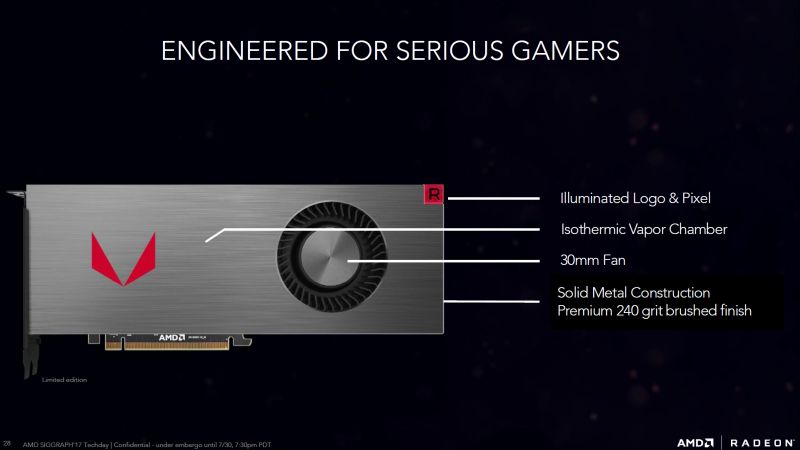 For its aesthetics, the card features that new illuminated logo and pixel at the right corner of the card, which lights up when powered up. To be clear, the Radeon RX Vega 64 that we saw on stage during the presentation was a limited edition, air-cooled variant of the card that comes with the silver cooler shroud. 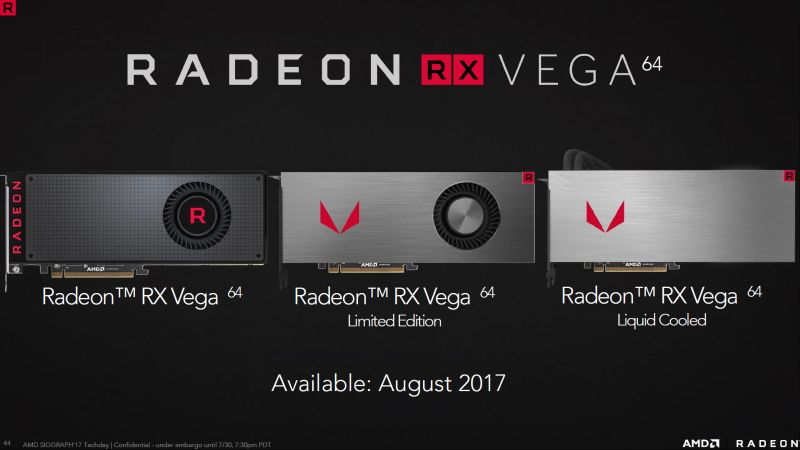 AMD had said that the silver shroud variant would only be available in limited quantities, after which consumers will only be able to get the card in the iconic matte black cooler shroud, complete with the Radeon logo emblazoned at the top of the card.

Regardless of the cooler shroud color or availability, the air-cooled variant of the Radeon RX Vega 64 is comprised of a 30mm fan and Isothermic Vapor chamber, a combination which AMD’s engineers says keeps the card’s maximum temperature (I.e. under heavy workload) at 75 degrees Celsius. 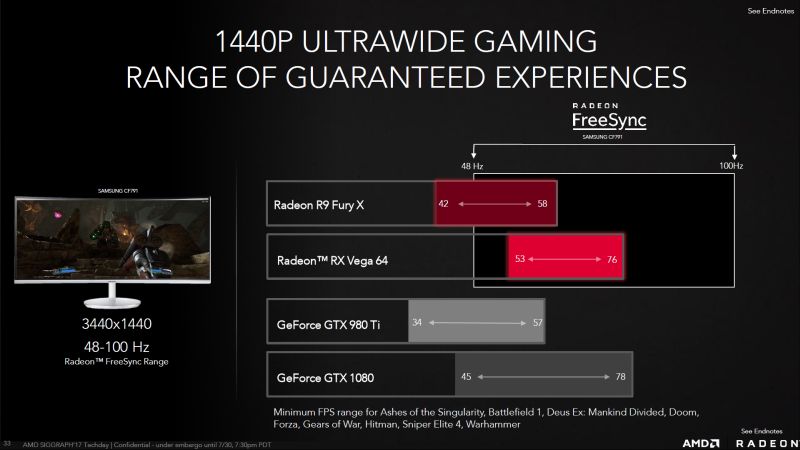 Performance-wise, The Radeon RX Vega 64 comes with a plethora of both old and new features, such as better support for the DirectX 12 and Vulkan API, Asynchronous Compute, and the newly added feature called Rapid Packed Math. In terms of raw power and framerates, AMD says that the new card will have no problems keeping the average frame rates within the 53 fps and 76 fps range on a FreeSync gaming monitor with a refresh rate of 100Hz, while gaming on a 4K FreeSync monitor will see the card yielding an average between 43 and 57 fps on 60Hz FreeSync display. 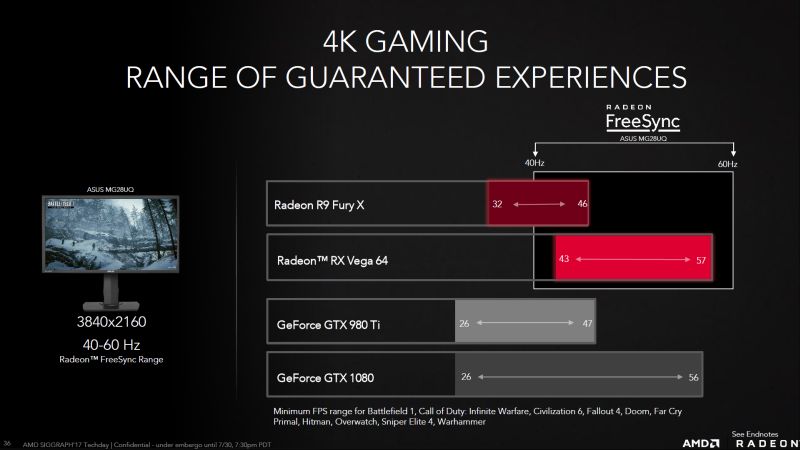 For those of you who managed to pick up on the ‘air-cooled variant’ mention in the last paragraph: yes, AMD did also announce that there will be a liquid-cooled version of the Radeon RX Vega 64. 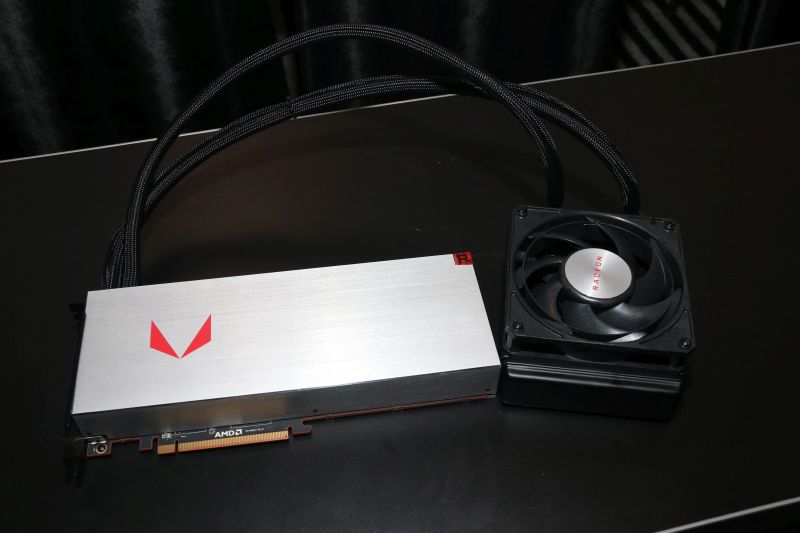 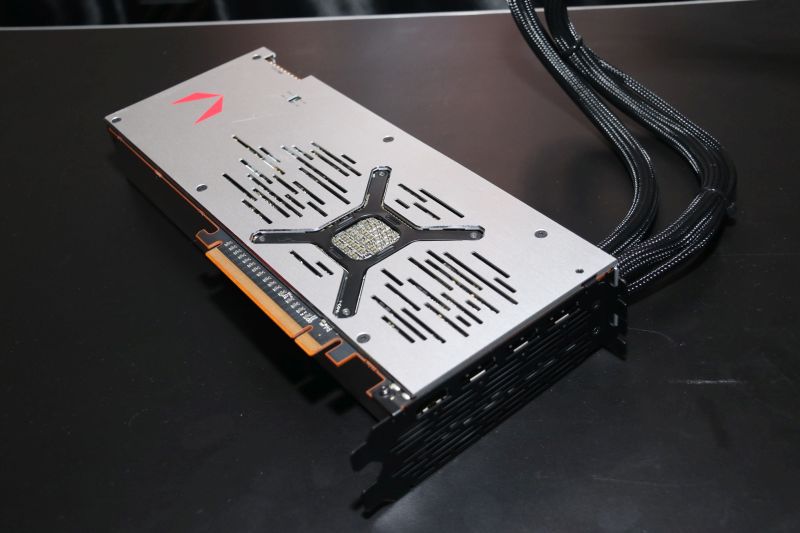 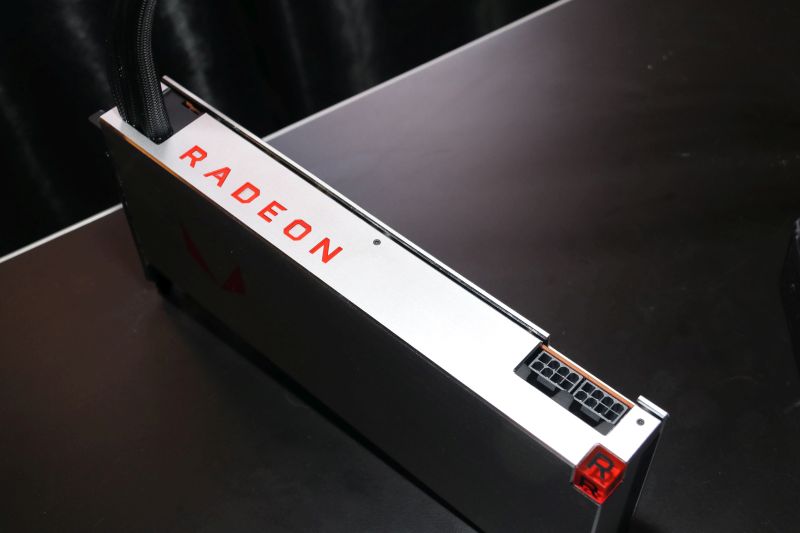 The specs of the liquid-cooled version are essentially the same as the air-cooled variant, with the exception that its base and boost clockspeed have been increased to 1,406MHz and 1,677MHz respectively. It’s Peak SP performance and Peak Half Precision performance has also been increased to 13.7 FLOPS and 27.5 FLOPS respectively: approximately 10 percent higher than the air-cooled variant of the Radeon RX Vega 64. 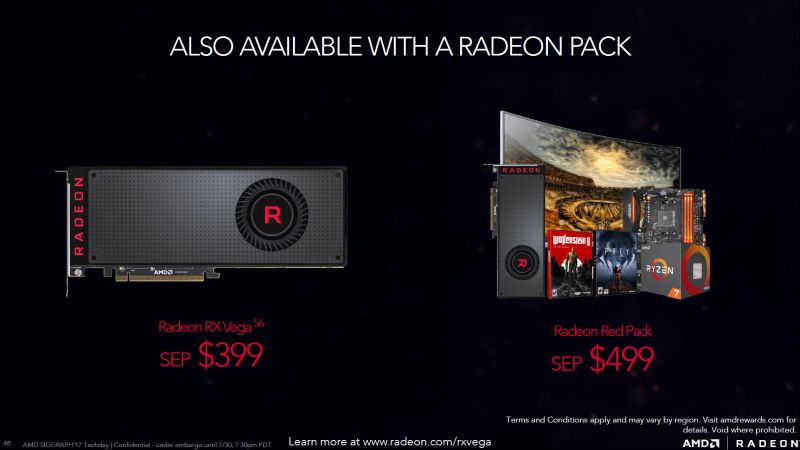 But those weren’t the only two cards to be announced during the tech day presentation, as nearing the end of the Tech Day, AMD also announced that they would be launching a Radeon RX Vega 56, another enthusiast-level graphics that is capable of churning 10.6 TFLOPS of power.

The card will have a base and boost clockspeed of 1,156MHz and 1,471MHz, respectively. As the last part of its name suggests, the card will have 56 Next-gen Compute Units, and up to 3,584 Stream Processors.

Both the air-cooled and liquid-cooled Radeon RX Vega 64 and the Vega 56 will go on sale in August 2017, but more specifically, AMD intends to see its new enthusiast flagship graphics card sold by way of its special bundles, known as Radeon Packs. 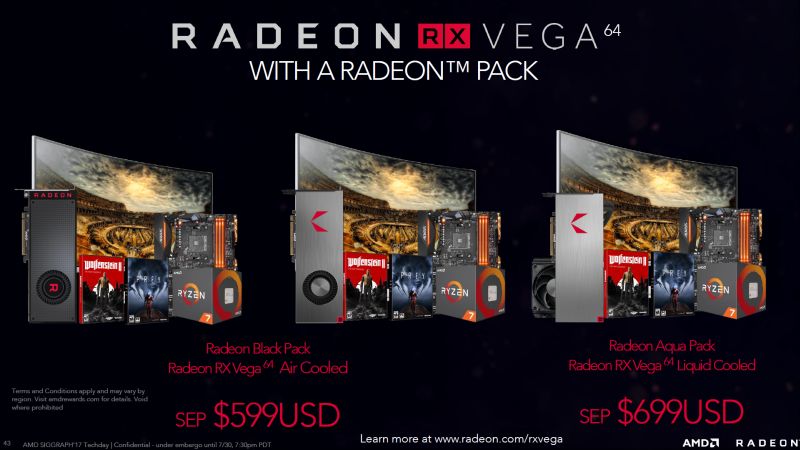 These Radeon Packs will not only have the card, but will also give consumers a US$200 (~RM956) off on specific AMD FreeSync gaming monitors, US$100 (~RM428) off of selected Ryzen 7 CPU and motherboard combos, and two free game titles worth US$120 (~RM513) that varies, depending on the region.

At the time of writing, AMD had said that they were still working with vendors in Malaysia to finalize which product would best suit its Radeon Packs in the country. 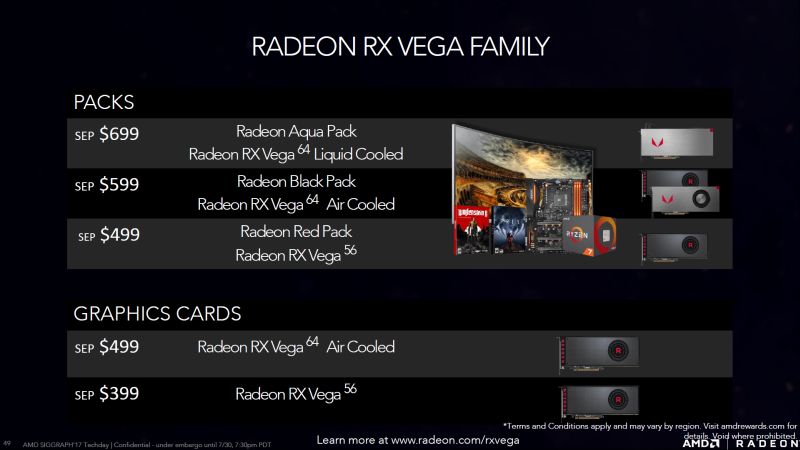 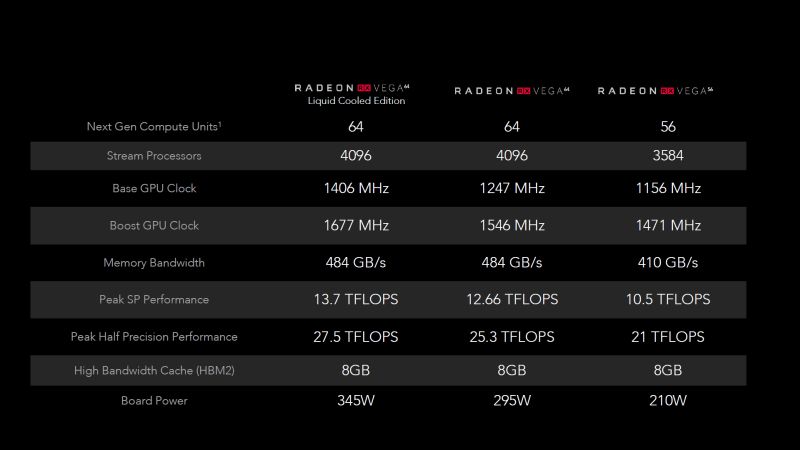