AMD has finally release the update to their Crimson Edition software for their Radeon GPUs, and the name of it is (wait for it) the Radeon Crimson ReLive Edition. As many Radeon users know, AMD revamps, refreshes, and updates their Radeon drivers every year, and have done so since the launch of Omega in 2014, the first revamp to replace the company’s then aging Catalyst Control Center.

There is literally a plethora of changes that comes with the new Crimson ReLive drivers, and to make this as easy but still as comprehensive for you, we’ll be breaking it down in as many sub-sections as we can for you, especially the more relevant points of this updates for us all.

All Under One Roof Beginning from today, the Crimson ReLive drivers envelops both AMD’s Radeon software AND their Radeon Pro software segments. Prior to this, AMD has kept drivers for GPUs in both segments separated and specialized, but as Radeon cards become more adaptable and almost on par as Radeon FirePro cards, the line between between consumer-grade and enterprise-level cards are slowly starting to dissipate and blur, it’s easy to understands the rationale behind AMD’s decision to simply release a single, unified driver update for card under both the Radeon and Radeon Pro families. 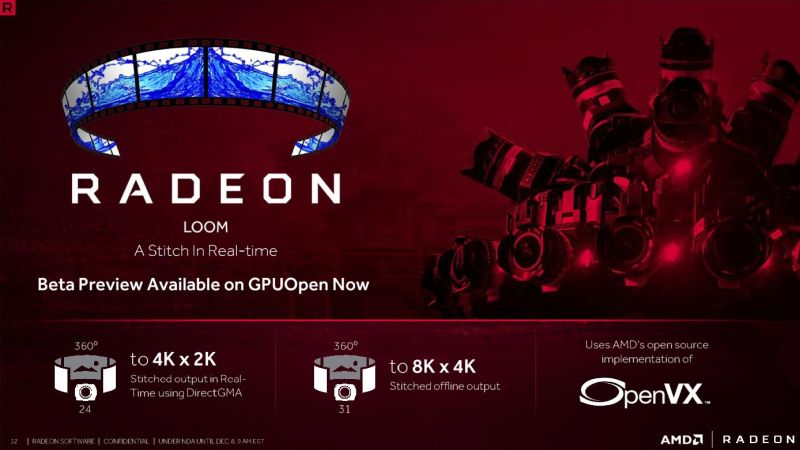 As a stand-alone feature, video stitching has been around for a while now. The new Radeon Loom feature (which you can find on AMD’s GPUOpen site) takes video stitching a step further by now allowing Radeon users to stitch images with resolutions greater than 4K (try 8K) in order to create an extremely high resolution 360 picture.

There’s more too. With Radeon Loom, video editors can also stitch videos together at resolutions as high as 4K by 2K. While it may seem like overkill for some, it is important to note that individuals such video editors and YouTubers are beginning to utilize 4K video resolutions as a way to cater to consumer demands for higher resolution videos to accommodate their own 4K TVs or displays. 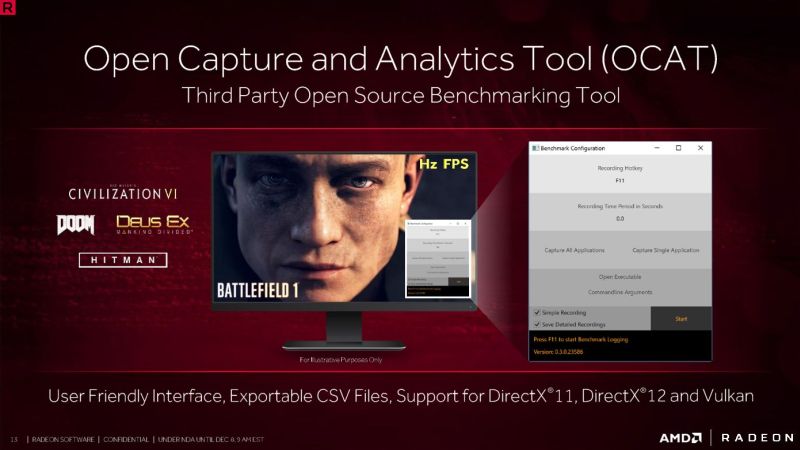 This feature has long been a “Finally, at long last” moment for AMD, and rightly so. The company’s competitor, NVIDIA, has long had features that allow users to record their gameplay footage.

With the Crimson ReLive driver, Radeon users will now have access to AMD’s new benchmarking tool, the Open Capture and Analytics Tool, or OCAT for short. The tool is the brainchild of Hialgo, a software company that AMD had acquired back in July this year, in an effort to further streamline their software for their graphics cards.

As far as we can tell, OCAT is capable of displaying a display’s refresh rate and average frame times (fps), while also to record the video at the same time. If all this sounds strikingly familiar, it’s because the new OCAT tool seems to mimic the same features of the third-party benchmarking tool, Fraps.

The in-game recording ability of ReLive and OCAT also means that AMD is able to go toe-to-toe with NVIDIA's own Shadowplay video recording feature.

If there is an edge that OCAT has over its currently competitor, it is that it is able to run perfectly fine in games that support both DirectX 12 and the Vulkan API. That’s right, with OCAT, you can now record video content on Vulkan-based games such as Doom. 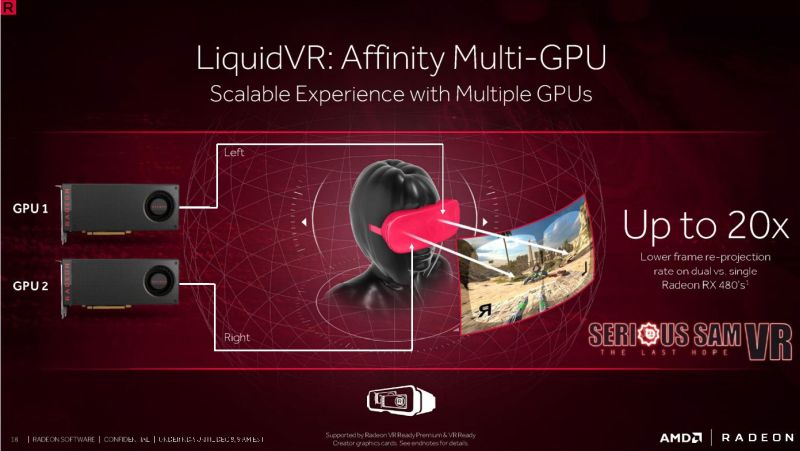 On the VR side of things, the new Crimson ReLive drivers also brings about the ability for LiquidVR tool, allowing user to make use of multiple GPUs, providing a more fluid and scalable experience with VR headsets, and essentially relegating a GPU to each eye on the VR headset. 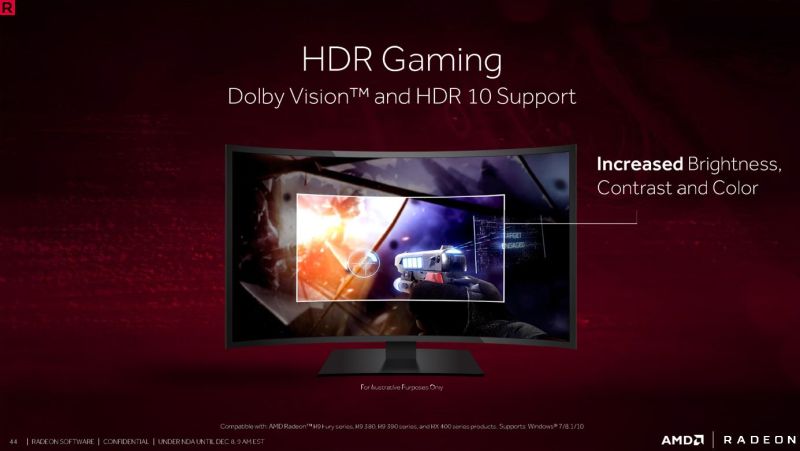 The new drivers also bring HDR support to the table on all AMD FreeSync displays. The new drivers will support both Dolby Vision and HDR 10, the two HDR standards that are on the market at the moment. 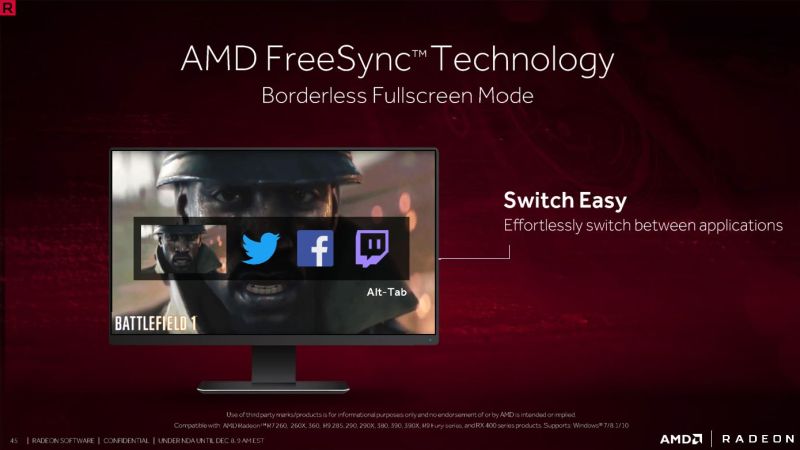 Speaking FreeSync technology, the new Crimson ReLive drivers also brings about seamless switching between programs within games that are capable of running in Borderless Fullscreen mode. Practically speaking, this means that gamers or PC users that use multiple displays won’t have to worry about their display going blank or crashing when doing so. This is perhaps another big announcement that comes with the Crimson ReLive drivers and FreeSync technology. In an effort to future-proof their hardware, AMD’s new Radeon drivers will hereforth provide support for DisplayPorts with High Bandwidth Resolution 3 (HBR3). This feature means that AMD FreeSync displays in the future will be able to pump out 4K resolutions at refresh rates as high as 120Hz, and 5K resolutions at a refresh rate of 60Hz.

Notice that we say future FreeSync displays and not current displays. There’s a very simple reason for that, and the reason is this: At this current moment, there are not FreeSync displays that bear support for the new DisplayPort HBR3 feature, let alone the ability to churn out 120Hz 4K resolutions. 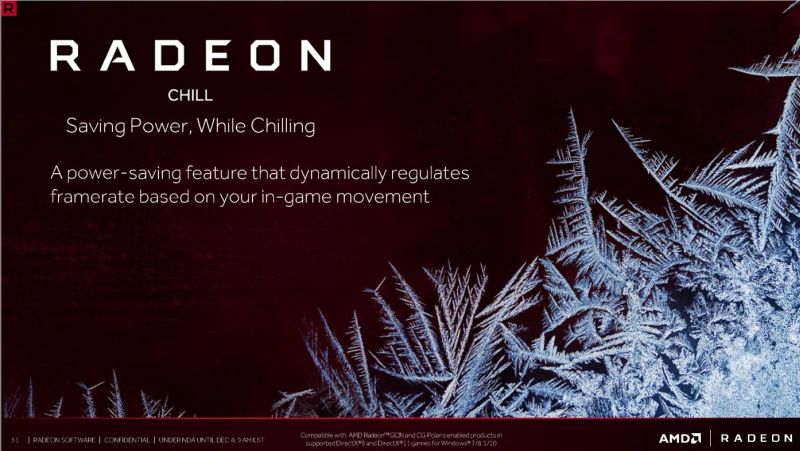 Power efficiency has always been a sticking point for AMD, whether or not they choose to admit. That being said, the company has at least strived towards doing something about the issue, and to that end, they’ve including a new power-saving feature with the new Crimson ReLive drivers called Radeon Chill.

As its moniker suggests, Radeon Chill adds another layers of power-saving by simply allowing the card to stay idle in game but still outputting faster response times during in-game scenes with less frames, and turning it off when more graphically intense games that require a higher number of frames come into play.

One important thing to note: AMD says that despite these gains in thermal efficiency, Radeon Chill currently only works with specific game titles at the moment, and only while running the older DirectX 11 API.  Don't worry, AMD did assure us that they will be making improvements to this feature a little later into the future, but for now, it only works for the titles below. 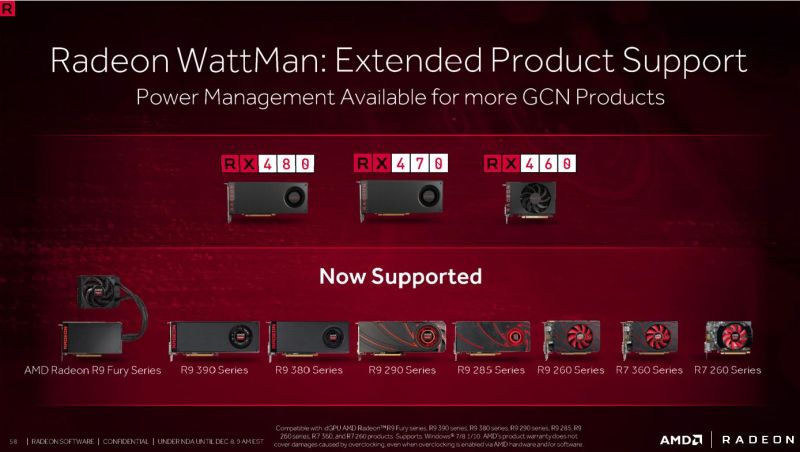 Yet another feature that AMD should have implemented across the board from the very start, the company’s WattMan overclocking tool which was once only available for the Radeon RX 400 series cards is now available across the board for certain older generation Radeon Fury, Radeon R9 and Radeon R7 GPUs.

XConnect Across the Board 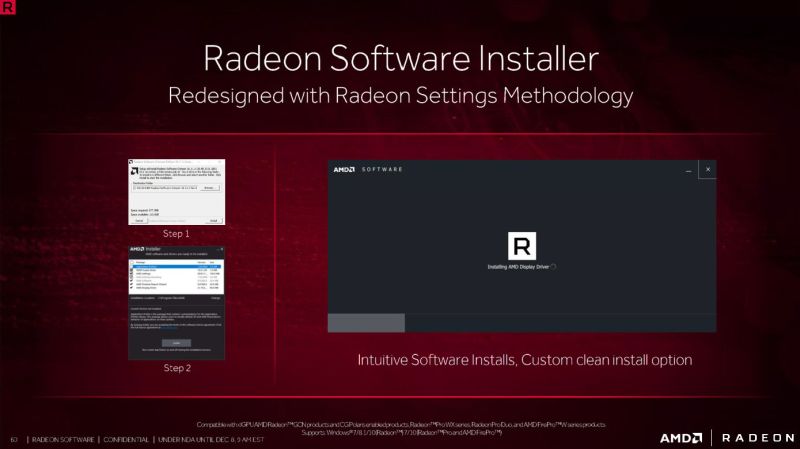 Beginning with the Crimson ReLive drivers, the Radeon Software Installer will now offer users the option to do a custom and thorough clean uninstallation of older drivers before effectively installing the new drivers. Lastly, the new drivers will also provide an in-house upgrade advisor that’ll automatically evaluate your current system, informing you if your system is powerful enough to play your chosen Radeon supported title. On the professional side of things, AMD also announced that they will be releasing Linux-friendly drivers for their Radeon Pro segments, thus giving consumers on the Linux OS the access to Radeon utilities such as FreeSync 1.0, DirectGMA, and even Vulkan for RHEL.

AMD's Crimson ReLive Edition drivers are already available for download, and can be found on AMD's drivers and support page. For currently existing Radeon users, your Radeon Crimson program should've prompted you about the update's availability already.