Gigabyte has readied six X299 motherboards, and RGB lighting is present on a lot of them in a big way. We’ve listed the boards as below: 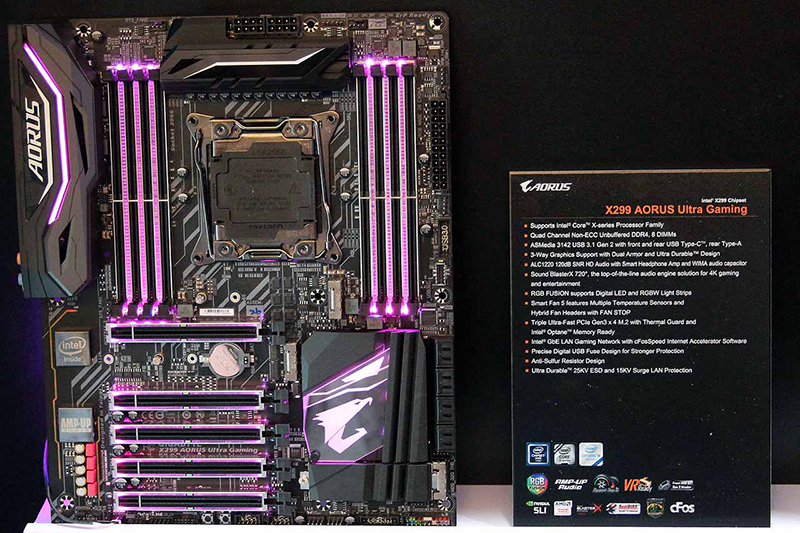 The X299 Aorus Ultra Gaming sits at the top of the line-up, and it features five PCIe 3.0 slots, comprising two x16 slots, one x8 slot, and two x4 slots for support up to 3-way CrossFire or SLI. Storage expansion options include three PCIe 3.0 x4 M.2 sockets and eight SATA 6Gbps ports, and while it doesn’t look like there’s a U.2 port here, most folks probably won’t miss it at all.

One of the M.2 sockets even comes with a shroud that blends in with the design of the PCH heatsink.

The board is also equipped with ASMedia’s latest ASM3142 controller that provides USB 3.1 (Gen 2) connectivity for the USB-C ports on the front and back and an additional USB Type-A port on the rear I/O.

On the networking front, it comes with a dual Gigabit LAN ports, one powered by an Intel controller and the other by a Killer E2500 chip, and Killer Wireless-AC 1535 Wi-Fi.

Finally, there are LEDs built into the I/O cover, PCH heatsink, and all the PCIe and DIMM slots, which you can control using Gigabyte’s RGB Fusion software.

The X299 Aorus Gaming 9 is very similar to the Ultra Gaming, with the same PCIe and storage expansion options, an ASMedia ASM3142 controller, and the Sound BlasterX 720 audio engine.

It can also provide a U.2 port should you really need one via an M.2 adapter, but this sacrifices one M.2 socket. The Aorus Gaming 7 and Gaming 3 sit further down the product ladder, and they progressively shed features found on their higher-end counterparts. For instance, the Gaming 7 has the same PCIe, M.2 and DIMM slot layout as its bigger siblings, but it features a pared-down Realtek ALC1220 solution without extras like the dedicated op-amps.

It also has just a single Intel Gigabit Ethernet connection and is lacking Wi-Fi connectivity.

Similarly, the Gaming 3 shares a lot in common with the Gaming 7, but it steps back to only two M.2 sockets. It is also missing the ESS Sabre DAC and not all its PCIe slots have been reinforced with metal. 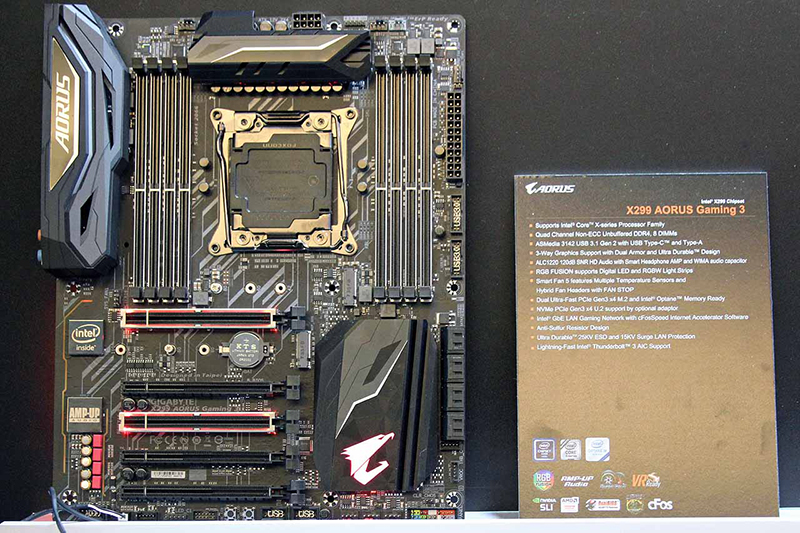 As a further sign that the Core X chips aren't just for those with cash to burn, Gigabyte is releasing the X299 UD4 as a value offering. As a result, it lacks certain premium features like the I/O cover and RGB lighting, and you also won't find any USB-C ports here. Then there’s the Gigabyte GA-C422-WS, the only workstation board here and also the only one to support up to 512GB of LRDIMM ECC memory. It boasts a total of seven PCIe 3.0 slots (four x16 or one x16 and six x8 slots), and supports up to 4-way graphics configurations.

However, it doesn’t include the ASM3142 controller, and instead features the ASM2142 for USB 3.1 (Gen 2) Type-A and Type-C connectivity.

There are just single M.2 and U.2 ports available, in addition to dual Intel i210 Gigabit Ethernet connections.