Speed is good, especially when it comes to computers. The faster your computer, the more productive you are. Unfortunately, not many can afford the luxury of buying an SSD to give their system a much-needed speed boost. In this blog entry, I’ll talk about the basics of building a Redundant Array of Independent Disks (RAID), namely the RAID 0 (zero) configuration.

The RAID system is the use of several traditional HDDs to act as one logical unit, providing either an increase in speed or reliability, depending on the type of RAID array being implemented. There are several types of RAID arrays for you to choose from, but the most commonly used RAID array is RAID 0. 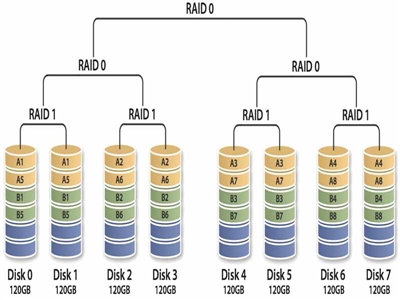 This configuration consists of using a minimum of two HDDs and ‘pairs’ them to act as one large HDD. Doing so will allow for a higher amount of bandwidth to be processed, but also increase the likelihood of data loss as data is broken into blocks, which are stored on BOTH drives. Creating a partition does NOT prevent data loss.

Building your very own RAID 0 system is simple. The most important component is a motherboard that already has built-in support for RAID configurations. This isn’t a problem as most modern motherboards already have this feature.

You’ll then need to purchase two identical HDDs of the same RPM and storage size. While RAID 0 can be implemented on disks of different capacities, it will only recognize the smallest capacity drive. This means that if you have one 250GB HDD and another 500GB HDD, the RAID configuration will only allow for a total of 500GB. The additional 250GB on the 500GB HDD will NOT be usable.

Once you’ve got your HDDs and RAID supporting motherboard, search for the SATA ports on the motherboard that support RAID, and connect your HDDs to them. Once connected, head into the BIOS and enable RAID. Take note that enabling RAID on HDDs will wipe the entire data currently existing on both drives, so it’s best to do this with a fresh set of HDDs. Always remember to backup important data on your HDDs.