Of Intel and Developers Last month, I had the opportunity to visit San Francisco for a week and attend one of the largest developer forums in the world: the Intel Developer Forum (IDF) 2012. As it was my first time in the States, as well as attending the IDF, it was an eye-opening experience to say the least.

So what’s IDF all about, you ask? Well, in a nutshell, it’s an event that’s held several times a year at different locations across the globe, where Intel shares their latest innovations with both software and hardware developers. At IDF, Intel engineers and executives also get the opportunity to gain valuable feedback from the developers, allowing them to create technology that benefits everyone, but that’s not what I’m going to talk about in this blogpost.

What really impressed me during IDF wasn’t the fact that Intel was unveiling plenty of new technology, but the fact that many of the Intel personnel were highly passionate and motivated about presenting these innovations and ideas of the technology of the future.

This enthusiasm was best seen in Brian David Johnson, Intel Futurist and Director, Intel Labs, Intel Corporation as well as Justin Rattner, Chief Technology Officer, Intel Corporation. Johnson, as the head of Intel Labs, prepped us (the media) for IDF proper by organizing a pre-IDF event. At the event, he excitedly shared his vision of the future – one that involved computers shrinking to such a degree, to the point where everything we interact with, from our TV to our coffee machine, could be a computer. He then moved on to speak about how technology and sci-fi have often complemented one another, citing The Tomorrow Project as a platform that best showcases how this happens. To do so, he invited a six-person panel on stage to discuss how sci-fi and technology innovations correlate, which was an interesting discussion as it really showed how sci-fi authors get ideas from existing technology and envisioned how that technology evolves in their stories, while engineers read these stories and try to develop existing technologies to the level depicted in those stories.

The level of enthusiasm was also present on the third and final day of IDF 2012, when Justin Rattner, Chief Technology Officer, Intel Corporation, took to the stage. Sporting mechanical bunny ears that supposedly respond to your neural waves as he appeared on stage, Rattner managed to easily draw the crowd’s attention before he introduces the world’s first all-digital radio system. While it may not mean much to you or me, but to the tech industry, it’s a big thing for developers as it opens up the opportunity to create devices that can easily communicate with each other. 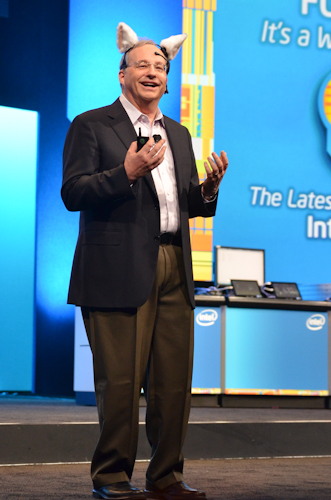 Both Johnson and Rattner presented with smiles on their faces and spoke without the need to refer to anything, because they knew their subjects by heart, and are highly passionate about their work.

I guess what I’m trying to say is that I found it inspiring how people like Johnson and Rattner can be so motivated about something. By having such motivation, their minds are constantly thinking about the next project, or next breakthrough, because they’re doing what they like and it really shows. To put things simply, I say we all ought to take a leaf out of Johnson’s and Rattner’s books and find that something that we’re passionate about and do it!

After all, Abraham Maslow, a psychologist who is best known for creating the hierarchy of needs, did put self-actualization (the need to perform self-gratifying acts) as one of the stages a person has to achieve in order to be happy. 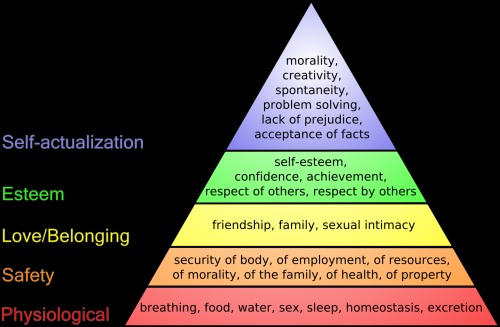