Best path to disappointment: Be a gamer who doesn’t believe in microtransactions

As we’ve established previously, it is humanly impossible to be the change you want to see unless you have vast amounts of money or influence. And for gamers, it looks like there is more truth in that statement than the argument that humans are diurnal. Here’s an article from Kotaku last week that will get any gamer’s blood boiling. Give it a read, give the comments a read and give it some thought before we continue.

As you’ve gathered, there are a lot of people who would pay for microtransactions. There are people who, after paying the equivalent of US$60, feels it’s completely justified to pay more for things that are already in the game, which needs only the act of actually playing the game to unlock. People who think that “Oh, gee I just bought this game that I have no time to play, so I’ll pay even more money to get free content that I can get just by playing the game, so that I can pretend I actually played the game even though I didn’t.”

Now, I’m strictly talking about microtransactions for things that are already available in-game, not about things like DLC – which is questionable enough on its own – or season passes which are, in a way, the two of them combined. Those microtransactions make you pay for things that are already in the game, most of which can be obtained by meeting certain prerequisites, or what we gamers call unlocking. Some can only be obtained by paying, but that’s reserved for mobile trash and other scum-of-the-gaming-earth pay-to-win drivel. 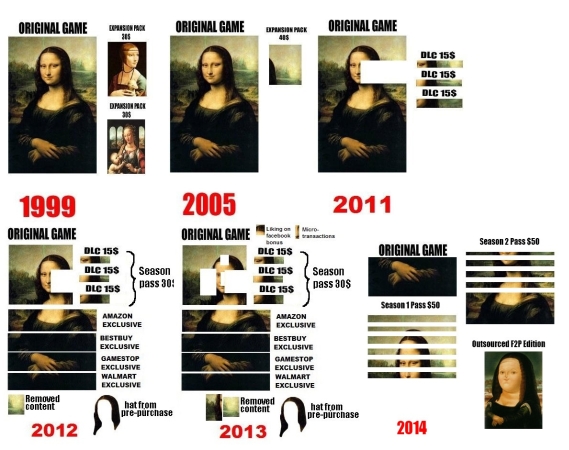 Competitive multiplayer aside, games are made to, among other things, give us a simulated sense of achievement. By clearing a madly difficult game like Bloodborne and its expansion, The Old Hunters, you get the feeling that you can overcome any adversity, no matter how illogical or impossible they are, if you understood the problem and strategized your way through or around it. Now, imagine if Bloodborne had microtransactions allowing you to skip through the game. Instead of tales of countless deaths, hours of retries, the eventual reading of your opponents’ moves, skillful evasion and masterful timing of strikes you’ll tell your friends, your story will sound a bit like this, and spoiler alert for those who haven’t played the game:

“Yesterday, I finally defeated the Bloody Crow of Cainhurst by throwing a wad of cash worth US$10 at his face. It was an epic battle, but after two seconds of visiting the PS Store, he now lies dead in a pool of my money.”

I’ve said this multiple times before, and at the risk of sounding like a pirated CD bought at a night market, I’ll say it again: this is ridiculous. But of course, it continues to exist because people want it. They pay for a game that they know they won’t play much, and they pay more for in-game stuff to buy the delusion of having completed the game. Amazing that there are people like this out there isn’t it? Not really. Like one of the comments in the article said, people are appalled by Donald Trump becoming US President – with some even intending to leave the country if it happens – but the fact that there are people who vote for him – enough for him to actually be winning seven states – shows that there are just as many people who want him to be President.

Now, let me directly pull a quote by a user who goes by Danjal87 on the matter: 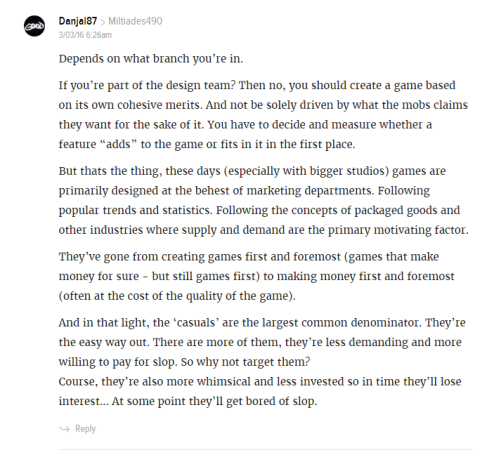 This sums up everything else in my mind right now that I feel no need to elaborate further. And this isn’t limited to the gaming industry either, but basically every existing one that you can think of. It’s why your Facebook feed is filled with cat videos as well as listicles and other articles with clickbaity titles that disappoint you – by having absolutely nothing to do with the preview that you saw – when you actually dive in to see what it’s all about. Because that’s what people want to see, despite however much other people moan about quality content, but I digress.

So yes, being the change you want to see will only stroke your ego so far before you go limp with no substance to show for your efforts. To make it in this harsh reality, it looks like the way to go is indeed to join them if you can’t beat them. Hence the need to distinguish between words of wisdom and iterations of idiocy.

And on that hypocritical and conceited bombshell, adieu to y’all.