Abundance, greed, and all the passive-aggressive festivities

Chinese New Year is the time of the year when I see people reveling in abundance. Well, usually. This year, there's an atmosphere of thrift, and with that, even greater greed than before.

Someone was pretty proudly announcing on Facebook that we Chinese are hardworking people who prioritize putting food on the table before having luxurious food. I'd say that he is also very mistakenly saying that, because this is, sadly, only true this year. But what has always been true, on the other hand, is our brazen, unapologetic greed.

The Chinese New Year has always been the time of year when my ‘religious’ extended family go around temples for blessings. And all I see is the greed of the middle-class people going after the free food, and announcing loudly their donations to the temple in a bid to show off, or in hopes that their good deed will have good returns. Or whatever their idea of karma is. These doesn't apply to my family members fortunately, but to me, it all simply reeks of pride and greed.

The same applies to Wesak Day - people stuff food into the monks’ alms bowls in the belief that the more you feed them, the greater the amount of (good) karma you get, never mind the flip side that they're overfeeding those very monks and wrecking their health which is as grave a sin as feeding a hungry monk is a virtue. Greed for good deeds is still greed, but because it's a religious belief, it's never scrutinized. 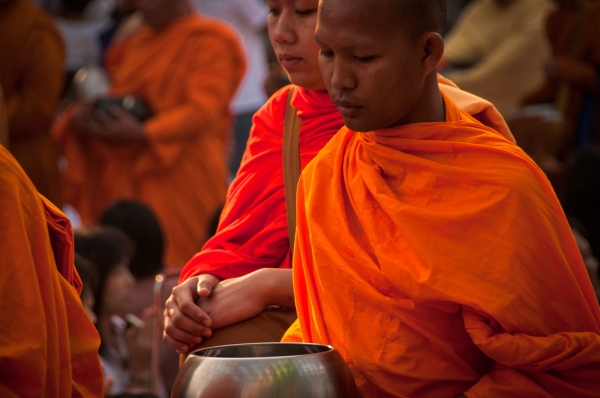 I remember being told a story by a Buddhist monk about two different people who made donations to the temple where he was stationed. One came with a full suit, a check of RM10,000 and a demand that there be a plaque to honor his contribution. Then there was another man who came in a polo T-shirt and jeans, with a check valued in the millions. This man simply walked away after thanking the monk for taking the check. The whole story sounded to me like a jab at the people I described earlier as braggarts who view donations as a way to buy karma points, of which the sufficient accumulation supposedly leads to a ticket into heaven. Again, never mind the notion that greed reduces your karma points, leading the people who think they're heavenbound into the depths of hell instead. 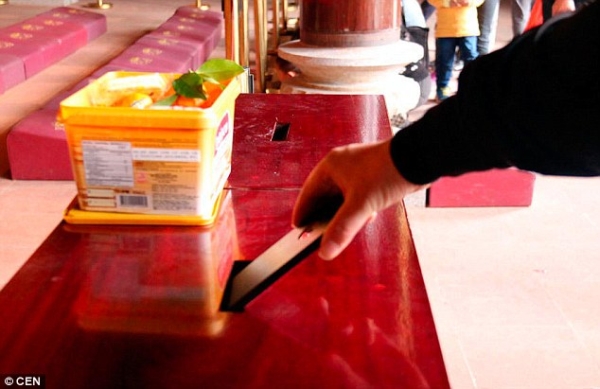 It's all very sad, but an unchangeable part of human nature. I mean, some of us can be decent, but expecting everyone to be decent is like expecting all the stars in space to end as a supernova. There will always be those who will not conform, which is fine because we need nonconformists when the norm is to be indecent.

Then with the other side of the extended family I see the decent people - no temple going, no humble bragging, just lunch and dinner with no strangers as we keep our accomplishments and shame to ourselves, within the family. Sure, there's talk about worldly things that is beyond our ability to change, like what a twit the current President of the United States is, but it's a less political atmosphere for me to be in. Less putting up airs and more of just being people.

The irony of it all is that it's the braggarts and temple goers that endlessly preaches about humility, while the modest people wouldn't give a rat's diseased dropping about the way you live your life as long as you're not actively trying to drive yourself into a corner or be a criminal. But I digress.

All this brings me to the tradition of having loads of new things for the Chinese New Year. Y’know, the new clothes and new paint. In the end, it all feels very showy, as if you can fake wealth until it shows up the way you can fake a behavior until you actually embody it.

It’s been awhile since I last bought new clothes for Chinese New Year’s sake. Sure, I've bought some last year. but it just so happens that I needed new clothes anyway, mostly for work. I cannot speak for everyone, but age - and the need to pay for stuff with my own money - has dampened the desire to get new things for the sake of getting new things. And that's before we take into account the weakening currency of ours.

Then you take tradition into the world of tech and it's a whole new level of make-believe abundance, especially when a phone is easily worth two months a fresh grad’s pay.

With that in mind, it's interesting to see the obsessive and compulsive braggarts who have all the new stuff and clearly not the finances to support that habit. Likely they did that to shut up or to one up that equally noisy relative who keeps humble bragging about their recent successful business deal that afforded them their new expensive car, watch, phone or whatever it is that's the new trendy thing to brag about, while they snidely ask each other about what either have to show for their successes. It's a vicious cycle of pride, and it's especially annoying for people who don't subscribe to that sort of lifestyle getting dragged into it.

Whether as a joke or not, this might explain this silly trend of renting themselves out as a fake boyfriend or girlfriend to other people. Granted it is extremely annoying to have relatives asking the single people when are they getting into a relationship, and those already in a relationship when they're going to marry. It might be that they are passive-aggressive attempts at pressuring you to get married so that they don't have to give you red packets anymore. Or if they're people your age that you don't get along with, then it's very likely they're trying to one up you as well as being bitter about having to pay you cash for that privilege. 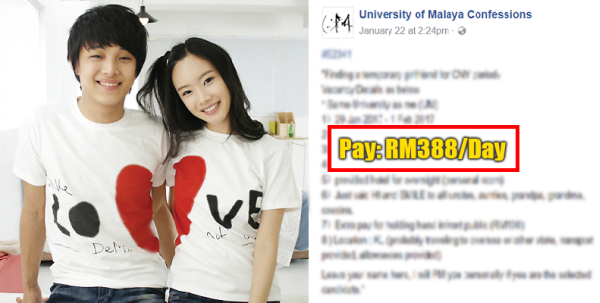 But I'd much rather go through all that - and get petty people to part with their money because tradition compels them - than succumb to what is essentially declaring my self worth as chump change.